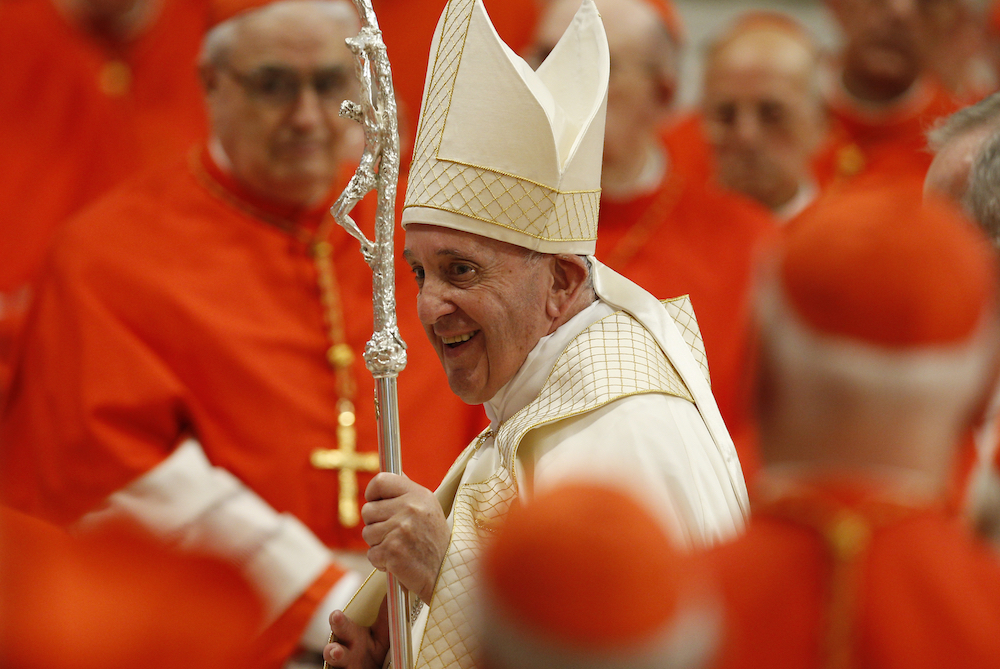 Pope Francis leaves in procession after a consistory for the creation of 13 new cardinals in St. Peter's Basilica at the Vatican Oct. 5. (CNS/Paul Haring)

Pope Francis Oct. 5 exhorted the world's Catholic cardinals to tend especially for those in need and to practice kindness with those in their care, lamenting what he called the "disloyal actions" of some clerics who only criticize their coworkers.

In a ceremony at St. Peter's Basilica to create 13 new cardinals, including the head of the Vatican's refugee office and a number of prelates who have ministered in the world's most remote areas, the pontiff focused on the need for the Catholic Church's highest officials to experience and express compassion.

"The readiness of a cardinal to shed his own blood — as signified by the scarlet color of your robes — is secure if it is rooted in this awareness of having been shown compassion and in the ability to show compassion in turn," the pope explained during the ceremony, known as a consistory.

"So many disloyal actions on the part of ecclesiastics are born of the lack of a sense of having been shown compassion, and by the habit of averting one’s gaze, the habit of indifference," he said.

Francis suggested the cardinals ask themselves: "Am I compassionate towards this or that brother or sister, that bishop, that priest? Or do I constantly tear them down by my attitude of condemnation, of indifference?"

Historically, cardinals have come from larger cities known for their Catholic populations or global importance, Francis has sought to diversify representation in the group -- choosing men from places long underrepresented or even not represented in the College of Cardinals.

Francis again diversified the college on Oct. 5 — adding 13 new prelates, including those from three African nations, Indonesia, and a rural town in Guatemala. Among the Europeans chosen were those who have spent long years of ministry in the global south.

The pope's message of compassion and kindness in his homily at the consistory appeared tailored specifically for his 13 newest advisors.

In individual and group interviews over the past week, many of the new cardinals stressed similar emphases in how they understand their priestly ministry, focusing on the need to help the world's record numbers of migrants and refugees, to pursue interreligious and intercultural dialogue, and to give hope to Catholic communities struggling in remote places.

New Cardinal Michael Czerny, a Jesuit who has led the Vatican's efforts to help refugees since 2017, reflected on one of his first experiences in ministry: serving at the Central American University in El Salvador immediately after six Jesuits and two others had been murdered there in 1989.

"This was an important first experience for me, to feel and corroborate that we Jesuits were truly willing to go where most needed or where others cannot go," Czerny told NCR. "I found in the midst of the crisis a Church that had been beaten but was alive, full of suffering and of the Spirit." 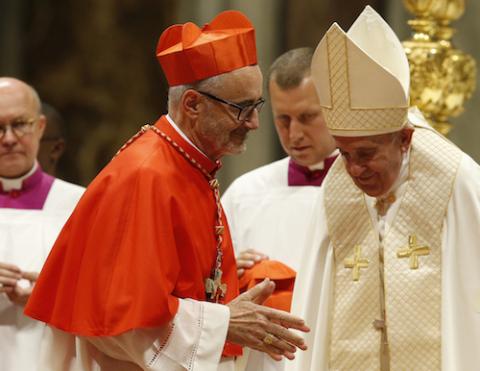 New Canadian Cardinal Michael Czerny is pictured after receiving his red biretta from Pope Francis during a consistory for the creation of 13 new cardinals in St. Peter's Basilica at the Vatican Oct. 5. (CNS/Paul Haring)

Czerny, who later served eight years in Kenya and had his new pectoral cross made from wood taken from one of the dinghy boats used by refugees to traverse the Mediterranean Sea, also spoke about the importance of Francis' emphasis on ministering to those "on the periphery."

"I have seen that no matter where they are, all people are fully capable of hoping and loving," he said. "Everyone's human rights should be respected equally. The indifference, hostility and greed that cause some to push others to the periphery are a tremendous blight on our times."

Francis reflected in his homily Oct. 5 on a portion of Mark's Gospel where Jesus preaches to a crowd of five thousand and is said to have been able to feed the crowd with five loaves of bread and two fish.

The pope noted that the apostles had wanted Jesus to dismiss the crowd so they could go and find food for themselves, saying they showed themselves "lacking compassion."

"This is a common attitude among us human beings, even those of us who are religious persons or even religious 'professionals,'" said the pontiff. "The position we occupy is not enough to make us compassionate."

"They would have thought: 'It’s not up to me,'" said Francis. "There are always justifications; at times they are even codified and give rise to 'institutional disregard.'"

"This all too human attitude generates structures lacking compassion," he said. 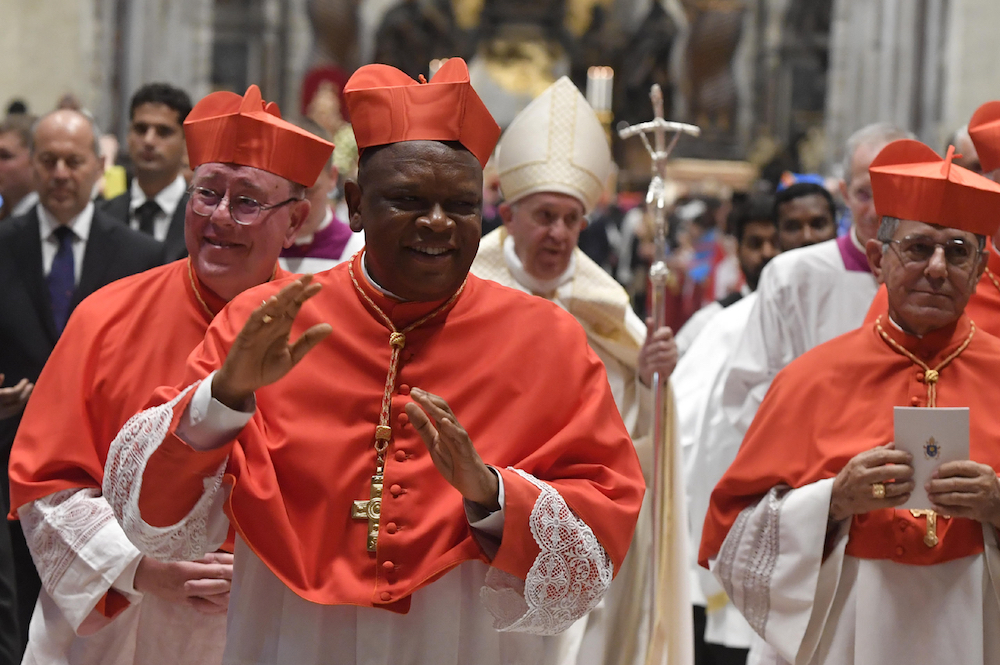 New Cardinals Jean-Claude Hollerich of Luxembourg, Fridolin Ambongo Besungu of Kinshasa, Democratic Republic of the Congo, and Juan Garcia Rodriguez of Havana walk in procession with Pope Francis during a consistory in St. Peter's Basilica at the Vatican Oct. 5. (CNS/Vatican Media)

'Finding people where they are'

After the homily, each of the 13 prelates received his new signet ring and red hat, known as a biretta, from Francis before St. Peter's high altar.

New Cardinal Jean-Claude Hollerich, who is also a Jesuit and is the archbishop of Luxembourg and the president of the Commission of the Bishops' Conferences of the European Union, spoke Oct. 4 to a group of journalists about the need for the church to pursue its mission of evangelization differently than it had in past centuries.

Hollerich, who ministered for nearly two decades in Japan and even fielded questions from journalists at the press office in Japanese, referred to the parable of the Good Shepherd. He said that with the decline in church attendance across Europe it sometimes feel as if the 99, and not the one, have gone lost.

"We have to go and see which pastures they are on. What is attracting them? Where do they see life today?" he said. "Because every human being is driving for happiness, is driving for sense in their lives. We have to find people where they are."

Hollerich gave as an example those who volunteer to serve on the rescue ships patrolling European seas to help refugees in distress, saying he had spoken via radio Oct. 3 with members of one such ship on the Ionian Sea.

"You see all the chance for evangelization, for mission," he said. "You have people working on these ships who have never gone to any church, but they feel touched and they get the message of Christ."

New Cardinal Michael Fitzgerald, a Missionary of Africa who spent years in ministry in the central and eastern parts of that continent before serving as president of the Pontifical Council for Interreligious Dialogue from 2002-06, spoke about the need to listen to others when pursuing interreligious or intercultural dialogue.

"Try to understand people," he said of his approach. "Don't come with your ideas and this is the only truth. But try to get them to respond and to see and to take seriously what they say."

Although retired, Fitzgerald continues that kind of ministry today in Liverpool, where he lives in a newly formed community with other members of his order. In fact, when Francis announced the list of new cardinals Sept.1, Fitzgerald was at an Anglican church, taking part in an ecumenical prayer service. 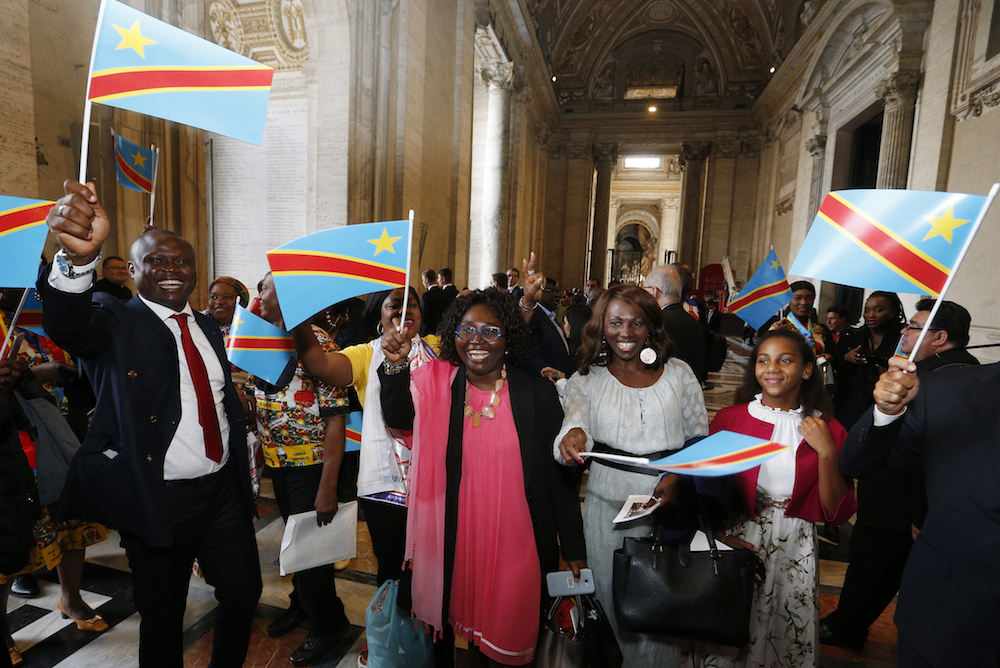 People waves flags of the Democratic Republic of the Congo after a consistory in St. Peter's Basilica at the Vatican Oct. 5: Cardinal Fridolin Ambongo Besungu of Kinshasa was among the 13 new cardinals. (CNS/Paul Haring) 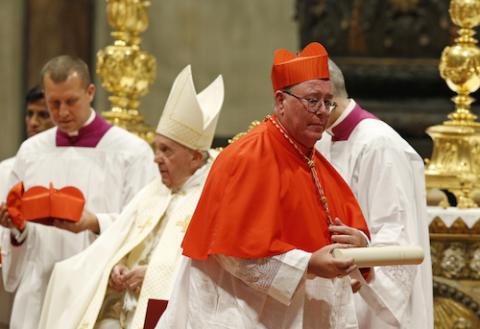 New Cardinal Jean-Claude Hollerich of Luxembourg carries his scroll after being made a cardinal by Pope Francis during a consistory in St. Peter's Basilica at the Vatican Oct. 5. (CNS/Paul Haring)

A responsibility for church and country

Cardinals are able to vote in a conclave upon the death or resignation of the pope until they reach the age of 80. As of the end of the Oct. 5 consistory, there are now 128 electors. That number will drop to 124 on Oct. 15, as four more cardinals turn 80 over the next 10 days.

The number of new cardinals further cements Francis' influence on the group that will one day elect his successor. As of Oct. 15, assuming there are no unexpected changes, the pontiff will have appointed a clear majority of the prelates: 66 of the 124 electors. Forty-two will have been appointed by now-retired Pope Benedict XVI; 16 by Pope John Paul II.

New Cardinal Fridolin Ambongo Besungu, who has been the archbishop of Kinshasa, the capital of the Democratic Republic of the Congo for about a year, told journalists that he considers his new appointment as one he is taking up for the people of his country.

"I feel the weight of the responsibility," he said. "It is a responsibility for the church, but also for my people. I have felt my appointment as a kind of hope -- the Holy Father has given hope to my people."

Pope Francis poses with 13 new cardinals during a consistory in St. Peter's Basilica at the Vatican Oct. 5. (CNS/Vatican Media)

A version of this story appeared in the Oct 18-31, 2019 print issue under the headline: Francis exhorts new cardinals to be 'loyal' to ministry of compassion.