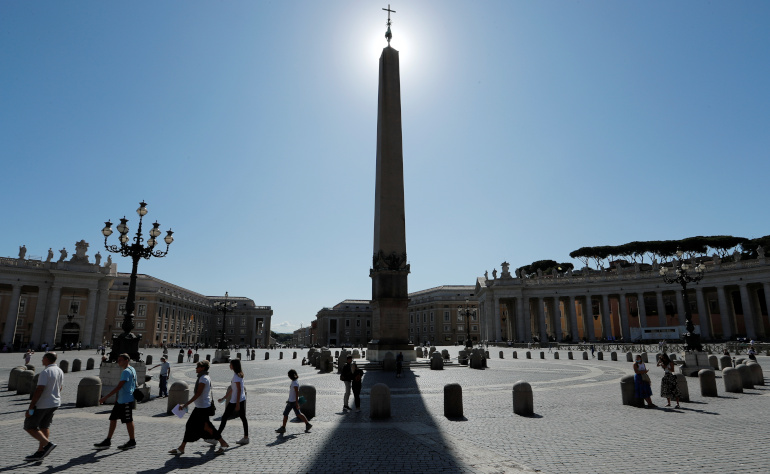 People walk in St. Peter's Square as Pope Francis gives his weekly general audience livestreamed from the library of the Apostolic Palace at the Vatican Aug. 5, 2020. (CNS photo/Remo Casilli, Reuters)

Pope Francis named six women to the high-level group that oversees the Vatican's finances Aug. 6, in what may represent the most senior appointments yet of women among the Catholic Church's exclusively male leadership structure.

The six women, all Europeans with backgrounds in finance, will join eight cardinals and one layman as members of the Council for the Economy, which Francis created in 2014 to supervise the financial activities of both the Vatican city-state and the offices of the Holy See.

The women's appointments come as part of a near-complete remaking of the group's membership, which previously included solely men. Only two of the council's previous 14 members will continue on: German Cardinal Reinhard Marx, who serves as its leader, and South African Cardinal Wilfred Napier.

Kelly is a former Labour Party politician and served as a minister in the governments of Tony Blair and Gordon Brown. Ferrar is a former treasurer for the Prince of Wales.

Kelly told NCR in an email that she felt honored by the appointment, adding: "It is wonderful to see the pope's commitment to promoting women to decision-making posts in the Vatican."

Among the cardinals joining Marx and Napier on the council is Newark, N.J. Cardinal Joseph Tobin, who replaces Houston Cardinal Daniel Di Nardo as the group's only U.S. prelate.

In an email to NCR, Tobin praised Francis' selection of the six women to serve as council members.

"I see their nomination as an effort by Pope Francis to ensure greater opportunities for women to offer their gifts in service to the church," said the cardinal. "He clearly considers the academic formation and vast experience of these colleagues as crucial contributions to one of his cherished priorities, the ongoing reform of the financial administration of the Holy See."

Although Francis has spoken at various times in his seven-year papacy about the need to appoint women to serve in more senior roles in the Catholic Church, the pontiff has been relatively slow to make such appointments. Nearly all leadership positions in Vatican offices remain held by priests, who, according to Catholic teaching, must be men.

But there are several prominent exceptions. In 2017, Francis appointed Barbara Jatta, a respected Italian art historian, to lead the Vatican Museums. And earlier this year, the pontiff appointed Francesca Di Giovanni, a diplomat and longtime staffer at the Vatican's Secretariat of State, as an undersecretary in that office.

The Vatican touted the latter appointment as the first time a woman had been given a managerial role at the Secretariat, traditionally considered the Vatican's most powerful office.

The new appointments to the Council for the Economy come as the Vatican is known to be dealing with a budget shortfall. That has been exacerbated by the coronavirus pandemic, as the numbers of tourists to the Vatican Museums, usually a key income source, have fallen to a trickle of the normal yearly rate.

The only layman on the council is now Alberto Minali, a former head of the Generali Group, Italy's largest insurance company.

By statute, the membership of the Council for the Economy must include eight cardinals or bishops and "seven lay experts of various nationalities."