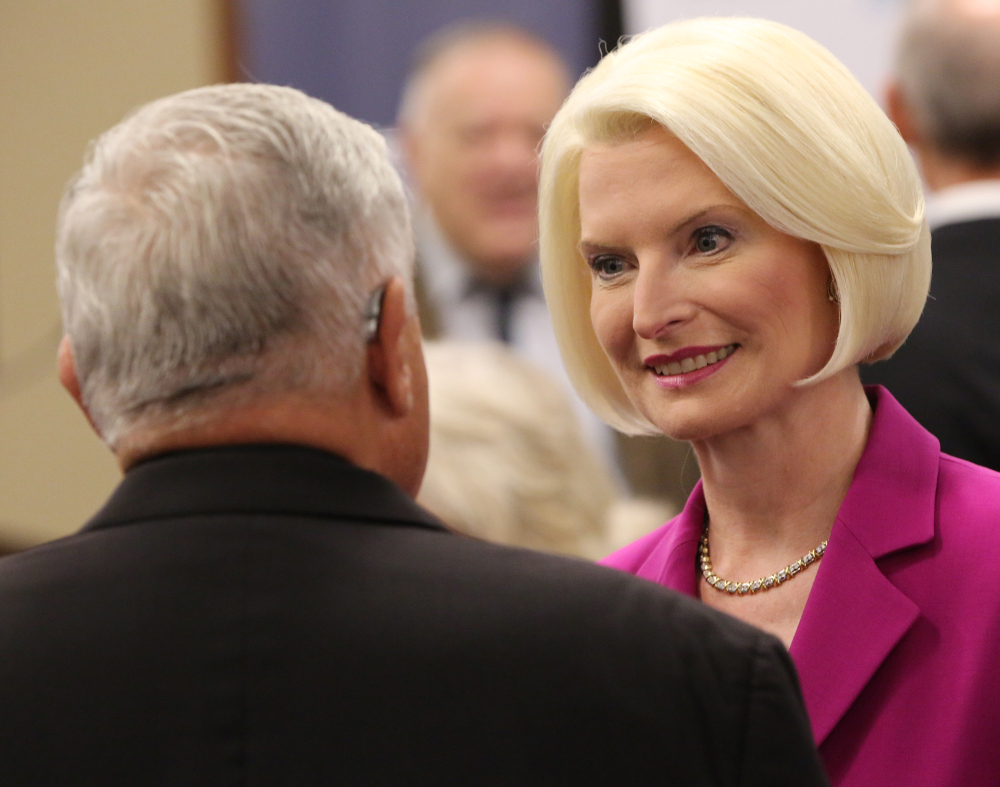 Callista Gingrich, U.S. ambassador to the Vatican, smiles as she speaks with a clergyman before a panel discussion on religious liberty July 24 on Capitol Hill in Washington. The gathering, titled "The Fight for International Religious Freedom: Perspectives From the Vatican," was sponsored by the Religious Freedom Institute and The Catholic University of America's Center For Religious Liberty. (CNS/Bob Roller)

The U.S. ambassador to the Holy See told a Washington audience July 24 that "promoting and securing religious freedom as a human right is a shared priority" of the Vatican and the United States.

Ambassador Callista Gingrich joined Archbishop Paul Gallagher, the Vatican secretary for relations with states, and other speakers at an event to discuss the Vatican's perspective on and fight for religious freedom around the world.

The Religious Freedom Institute and The Catholic University of America's Center for Religious Liberty put on the event. It was one of a number of side events taking place in Washington during an invitation-only Ministerial to Advance Religious Freedom organized by the U.S. State Department.

"We meet today at a critical time," said Thomas Farr, the president of the Religious Freedom Institute. He then went on to discuss a Pew report saying that 83 percent of people worldwide live in countries with high or very high levels of restrictions on religious freedom.

Gingrich, the keynote speaker, mentioned the State Department's most recent annual report on worldwide religious freedom, which, she said, indicated that religious freedom had declined in the past year.

"Repression is a daily reality, and no religious group is immune from persecution," she said. "It's a dangerous time to be a person of faith. We must do more."

She listed off several examples of persecution around the world, including that of Catholics in Nicaragua, Uyghurs in western China and Rohingya in Myanmar, "but these examples are only a small portion," she said.

During the question-and-answer session, one man in the audience described assisting East African villages in building wells so the women did not have to walk long distances to fetch water. He explained that not only did the well free up the women's time for other kinds of work or leisure, it also enabled them to spend more time attending religious services.

Gallagher explained that as Vatican secretary for relations with states, he did not intend to spend as much time on religious freedom issues as on other issues.

"Most of us who find ourselves in these sort of jobs don't have a lot of choice in what we do. We merely respond to the issues of the day. But also religious freedom is an issue that's always been around," he said.

He drew on the story of his own life to explain that the issue of religious freedom has a special resonance to him. He said that he is from Liverpool, England, and so the centuries-long struggle for Catholics in England to be free to practice their religion is always in the back of his mind, even if, he said, the struggle is not fully complete.

"As a Catholic, you're aware that you're not part of mainstream political society," he said.

He also mentioned that his father's sensitivity to religious and political discrimination helped him develop the vision necessary to see such things.

Gallagher said that while "the Holy See is in touch with every part of the world," the pope has a special concern for Latin America.

"Pope Francis is aware because he's from Latin America and has seen the struggles with both right-wing military rulers, and, more recently, other forms of government," he said.

The archbishop also said that religious freedom is necessary for human flourishing.

"We all want freedom independent of our religious affiliation, and all people need to breathe the air of freedom if they are going to truly flourish."

Gallagher also discussed how the Vatican does its work. 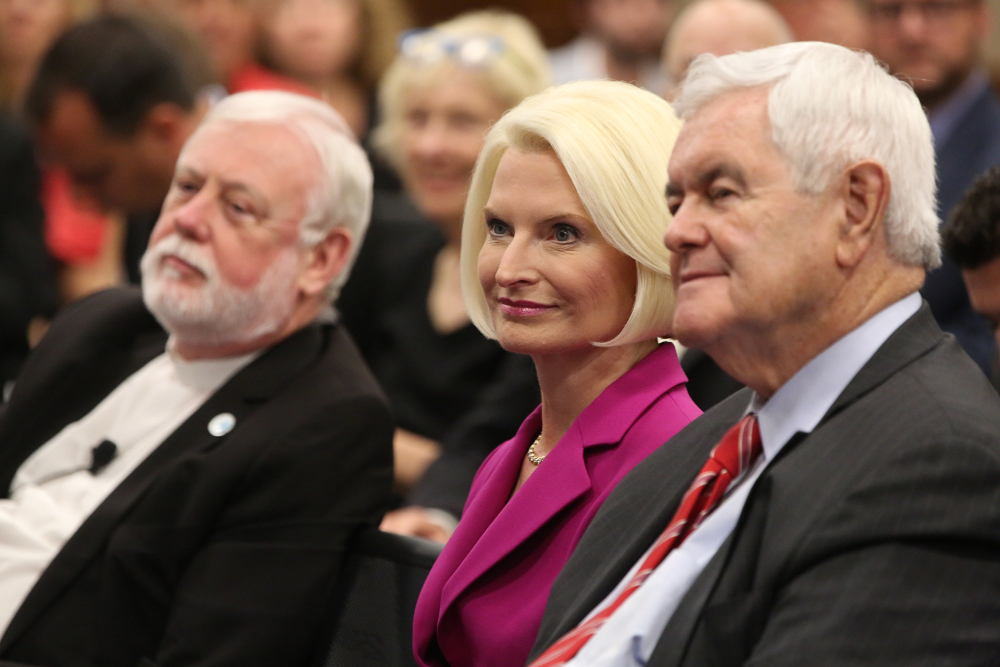 Archbishop Paul Gallagher, Vatican secretary for relations with states, Callista Gingrich, U.S. ambassador to the Vatican, her husband, Newt, listen during a panel discussion on religious liberty July 24 on Capitol Hill in Washington. The gathering, titled "The Fight for International Religious Freedom: Perspectives From the Vatican," was sponsored by the Religious Freedom Institute and The Catholic University of America's Center For Religious Liberty. (CNS/Bob Roller)

"We don't go in for grandstanding diplomacy. What we do is engage, show concern, and work through our local networks."

He said that, while he was the U.S. ambassador to the Holy See, 2009 to 2012, "all my efforts on behalf of religious freedom included education about religion."

The purpose of doing so, he said, was that lacking knowledge about the religions involved in a situation makes it more difficult to advocate on their behalf.

Despite his work in other countries, Gallagher expressed concern about the direction the United States and other First World countries are going in.

"We have to look at freedom of conscience, especially in the West. We're beginning to see Catholic positions condemned by more secular societies," he said.

Farr was concerned that this trend would hinder efforts to promote religious freedom in other countries.

"It's difficult to sell a product you don't believe in or don't understand," he said.