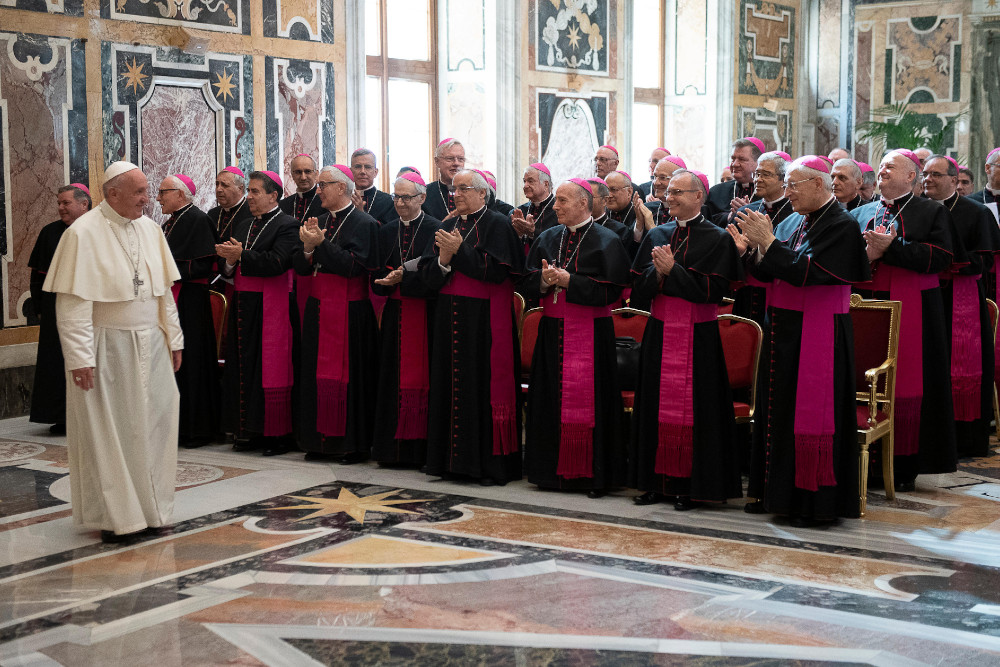 Pope Francis meets with nuncios from around the world at the Vatican in this June 13, 2019, file photo. The pope has asked the Pontifical Ecclesiastical Academy, which trains Vatican diplomats, to add a year of missionary service to the priests' training. (CNS/Vatican Media)

Pope Francis, adopting a suggestion made at the Synod of Bishops for the Amazon, has decided that every priest preparing for service in the Vatican diplomatic corps must spend a year in ministry as a missionary.

In a letter to U.S. Archbishop Joseph S. Marino, president of the Pontifical Ecclesiastical Academy, which trains Vatican diplomats, Francis said the year of missionary service should be added to the academy's curriculum beginning with students entering in the 2020-2021 academic year.

"I am convinced that such an experience could be helpful to all young men who are preparing for or beginning their priestly service," Francis wrote in the letter released Feb. 17. In a special way, he continued, mission experience would be helpful "for those who in the future will be called to collaborate with the pontifical representatives and, later, could become envoys of the Holy See to nations and particular churches."

Currently students — all already ordained priests — usually spend four years at the academy in central Rome. They earn a license in canon law from one of the pontifical universities in the city and then a doctorate in either canon law or theology. If they already hold a doctorate, then their time at the academy is only two years.

Vatican diplomats represent the Holy See to individual countries around the world as well as to international organizations, such as the United Nations. But they also represent the pope to the local Catholic Church and coordinate the search for new bishops.

At the end of the Amazon synod, Francis said he had "received in writing" a suggestion that "in the Holy See's diplomatic service, in the curriculum of the diplomatic service, young priests should spend at least one year in mission territory, but not doing an internship at the nunciature as happens now, which is very useful, but simply at the service of a bishop in a mission area."

In his letter to Marino, the pope quoted from a speech he gave to students at the academy in 2015 when he reminded them of the missionary focus of all that the church does, including its diplomatic activity.

He had told the students, "The mission to which you will be called one day to carry out will take you to all parts of the world: To Europe, in need of an awakening; Africa, thirsting for reconciliation; Latin America, hungry for nourishment and interiority; North America, intent on rediscovering the roots of an identity that is not defined by exclusion; Asia and Oceania, challenged by the capacity to ferment in diaspora and to dialogue with the vastness of ancestral cultures."

Francis told Marino that he was certain that, "once the initial concerns" about changing the formation program are overcome, "the missionary experience that it aims to promote will be useful not only for the young academicians, but also for the individual churches they will collaborate with and, I hope, it will give rise in other priests of the universal church a desire to make themselves available for a period of missionary service outside their dioceses."