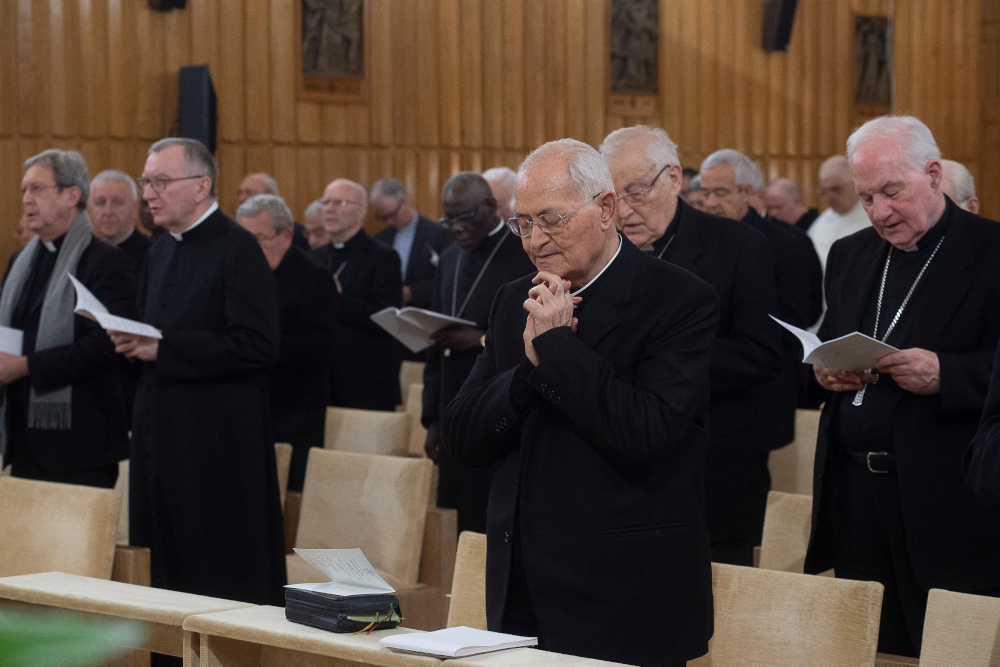 Top officials of the Roman Curia pray March 1, 2020, at the beginning of their annual Lenten retreat at the Pauline Fathers' retreat house in Ariccia, southeast of Rome. Pope Francis and his international Council of Cardinals met virtually Oct. 13, discussing the updated draft of a constitution reorganizing the Roman Curia and steps to implement it, the Vatican press office said. (CNS/Vatican Media)

Pope Francis and his international Council of Cardinals met virtually Oct. 13, discussing the updated draft of a constitution reorganizing the Roman Curia and steps to implement it, the Vatican press office said.

The first draft of the document, provisionally titled "Praedicate evangelium" ("Preach the Gospel"), was sent to the heads of current Vatican offices, bishops' conferences around the world and other experts in the spring of 2019.

After receiving feedback and discussing possible amendments, "during the summer months the council was able to work via internet on the text of the new apostolic constitution, the updated draft of which was presented to the Holy Father," the Vatican said Oct. 13. "In accordance with usual praxis, the competent dicasteries are now proceeding with the reading of the text."

"Today's meeting was convened to summarize the work done and to study how to support the implementation of the new constitution, once promulgated," the statement said.

Francis, according to the press office, told the six cardinals that while the text has not been completed and promulgated, "the reform is already underway, also in some administrative and economic aspects."

The 2019 draft of the new constitution called for the appointment of more laypeople in leadership roles at the Vatican, including as heads of Vatican dicasteries. It also envisioned merging the Congregation for the Evangelization of Peoples with the Pontifical Council for Promoting New Evangelization and placing the office ahead of the Congregation for the Doctrine of the Faith on the Vatican's organizational chart.

Discussing the changes with members of the Curia in December, Francis said the ordering of the doctrinal congregation and the congregation responsible for the church's efforts in lands traditionally known as "missionary territory" made sense "in an age when it was easier to distinguish between two fairly well-defined shores: a Christian world on one side and a world still to be evangelized on the other."

"This situation no longer exists," the pope had said.

Evangelization and the "new evangelization" St. John Paul II called for are urgent needs, the pope said, which is why the Curia itself must change and adapt.

Due to the COVID-19 pandemic and travel restrictions, the council will meet virtually again in December, the Vatican said.