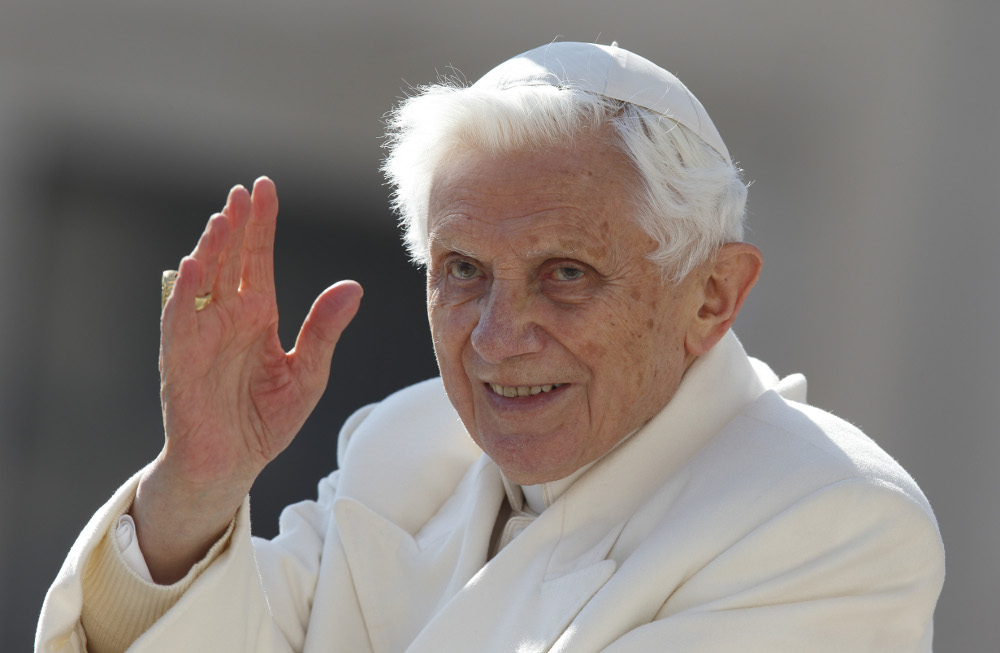 Pope Benedict XVI waves as he leaves his final general audience in St. Peter's Square at the Vatican in this Feb. 27, 2013, file photo. (CNS/Paul Haring)

For more than 50 years, the writings of retired Pope Benedict XVI on the relationship between faith and politics have insisted that the measure of human freedom is the extent to which each person acknowledges being dependent on the love of God, Pope Francis wrote.

The future pope's "direct experience of Nazi totalitarianism led him from the time he was a young academic to reflect on the limits of obedience to the state in favor of the freedom of obedience to God," Pope Francis commented in the preface to a new book.

"Liberating Freedom: Faith and Politics in the Third Millennium" is a collection of essays written over the course of several decades, including during Pope Benedict's eight years as pope. It is scheduled to be published in Italian by Cantagalli in May 11. The website Vatican Insider posted Pope Francis' preface May 6 and Vatican News posted an English translation the next day.

Pope Francis said that when Cardinal Joseph Ratzinger worked alongside St. John Paul II, "he elaborated and proposed a Christian vision of human rights capable of questioning on a theoretical and practical level the totalitarian claim of the Marxist state and the atheist ideology on which it was based."

Pope Francis said the contrast Ratzinger saw between Christianity and Marxism or communism definitely was not the focus on the poor and the need to fight inequality.

The key difference between Marxism and Christianity in the retired pope's writing, he said, lies in the relationship each sees between redemption and liberation.

"Does redemption occur through liberation from all dependence or is the only way to liberation the complete dependence on love, which would then also be true freedom?" he quotes Pope Benedict as writing.

The retired pope's insight is relevant and urgent today, Pope Francis wrote. "In fact, today more than ever there is the same temptation to refuse any dependence on love that is not a person's love for his own ego, for 'the I and its desires,' and, consequently, the danger of the 'colonization' of consciences by an ideology that denies the basic certainty that humankind exists as male and female to whom the task of the transmission of life is assigned," Pope Francis said.

A new set of human "rights," Pope Francis wrote, are actually leading to the self-destruction of humanity, as Pope Benedict had pointed out. The self-destructive attitudes "have a single common denominator that consists in a single, great denial: the denial of dependence on love, the denial that man and woman are creatures of God, lovingly made by him in his image and to whom they yearn as the deer longs for running water."

"When we deny this dependence between creature and creator, this relationship of love," Pope Francis wrote, "we renounce the true greatness of the human being (and) the bulwark of human freedom and dignity."

Pope Francis said reading the retired pope's essays "can help all of us not only to understand our present and find a solid orientation for the future, but they also can be a real source of inspiration for political action that, by placing the family, solidarity and equality at the center of its attention and planning, truly looks to the future with foresight."