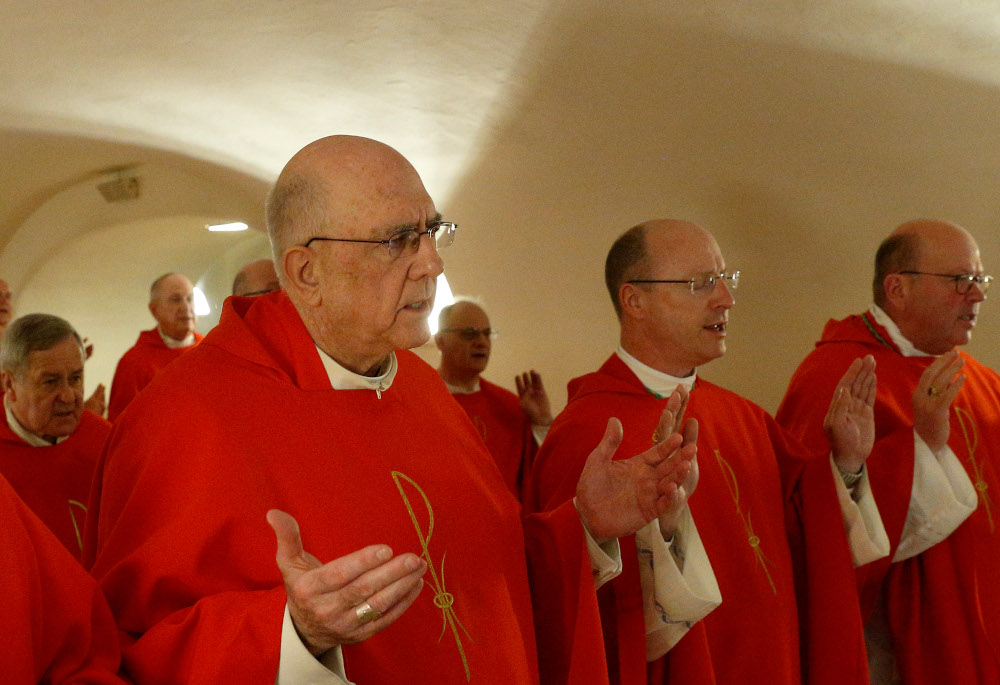 Archbishop Joseph F. Naumann of Kansas City, Kan., left, prays the Lord's Prayer as U.S. bishops from Iowa, Kansas, Missouri and Nebraska concelebrate Mass in the crypt of St. Peter's Basilica at the Vatican Jan. 16, 2020. The bishops were making their "ad limina" visits to the Vatican to report on the status of their dioceses to the pope and Vatican officials. (CNS/Paul Haring)

Protecting human life is the "preeminent" social and political issue, Pope Francis said, and he asked the head of the U.S. bishops' Committee for Pro-Life Activities to convey his support to the pro-life community.

Archbishop Joseph F. Naumann of Kansas City, Kansas, chairman of the bishops' committee, told Catholic News Service Jan. 16 that the pope agreed with the U.S. bishops "identifying the protection of the unborn as a preeminent priority."

"His response to that was, 'Of course, it is. It's the most fundamental right,'" Naumann recalled the pope saying. "He said, 'This is not first a religious issue; it's a human rights issue,' which is so true."

Naumann was one of 15 bishops from Iowa, Kansas, Missouri and Nebraska making their "ad limina" visits to the Vatican in mid-January to report on the status of their dioceses. He and other bishops spoke to Catholic News Service Jan. 16 after meeting with the pope for more than two hours.

Naumann said he told the pope that since the Roe v. Wade court decision legalized abortion, an estimated 61 million abortions have taken place in the United States.

"I think the pope was truly kind of stunned by that number," Naumann said. "Sadly, our abortion policies are one of the most liberal in the world. The fact is that it really is literally for all nine months of pregnancy. Most other nations don't permit (abortions) at least at a certain point in the pregnancy."

Naumann said that while Francis has "elevated issues like the care of refugees and migrants," he also understands that the situation in the United States is different compared to other countries.

"I think sometimes as he elevates those things, people mistakenly think, 'Well, that means that the abortion issue will become less important,'" he said.

Archbishop Robert J. Carlson of St. Louis told CNS it was "beautiful" when the pope explained why life was the number one, most important issue, "because if you're not alive you can't do anything else."

Carlson said they also talked about the importance of supporting pregnant women and making sure they have the resources they need to support that life.

While Francis "certainly talked about abortion as a preeminent issue," Carlson said, "at the same time he said there's another significant issue and that would be 'transgender' — where we are trying to make all human beings the same, it makes no difference, you can be whoever you want to be."

The pope, he said, brought the issue up as an example of "another significant issue in our day."

Asked whether the pope then gave the bishops any advice on how to handle the transgender debate, Carlson said the pope touched on the way proponents believe people are "all one and that there's no difference, which would fly in the face of what (St.) John Paul II talked about on complementarity and it would fly in the face of the dignity of the woman and the dignity of the man, that we could just change into whatever we wanted."

Of course, he said, a pope or a bishop or any religious leader must focus on a variety of issues and concerns, but "there are some people who are one-issue people and so they're never satisfied if you don’t focus totally on that."

The Catholic Church's positions are not partisan political positions, he said, since both Democrats and Republicans may not agree with its position on different issues.

"But I am not a Republican and I'm not a Democrat," Carlson said. "My job is to be a teacher of the faith and then to walk the talk."

Bishop W. Shawn McKnight of Jefferson City, Missouri, said that on the issue of abortion, Francis "simply reiterated what he's already said in many different ways," which is that "without life, what other rights are there? So, you have to begin with that. It's not the only issue — I don't think anybody has ever said that. But when you're looking at the core beliefs and the more essential rights, the right to life of the unborn is very important."

The pope, he said, "put it in a very beautiful way: Do we always want to simply eliminate those who are inconvenient? And, unfortunately, that's part of our culture in the United States — the practice, the habit, if you will, of just eliminating the uncomfortable, the unwanted, as the solution. And we're called to be better than that. We as a country are better than that."

When the U.S. bishops say, "the right to life is the 'preeminent issue'" in Catholics' political concerns, "that word is carefully chosen," McKnight said. "Because we want to avoid the perspective or the understanding that it's the only issue — because it is not."

Catholic voters, he said, need to be aware of a more general tendency or temptation "to get rid of unwanted people," whether they are the unborn or the aged, immigrants or the poor. "There is a certain consistency that is required of us as Catholics."

McKnight said that during the meeting, he thanked Francis for expanding the section of the Congregation for the Doctrine of the Faith that investigates clerical sexual abuse.

It was clear during the discussion how much the clerical sexual abuse crisis "pains the Holy Father," he said. "He reiterated that this must be dealt with, it's a crime, it can't just be swept under the rug or dealt with only in the confessional — no, it's a crime."

The bishop said the question of the Vatican's promised report on the case and career of Theodore E. McCarrick, the former cardinal and archbishop of Washington, was brought up by one of the bishops.

"I must respect the confidential nature of our conversation today," McKnight said. "I can just say I am very confident the pope is doing everything he can in order to rectify the problem and to help the entire church learn from the mistake of McCarrick's promotion in the church. The Holy Father sees that, he recognizes that McCarrick's promotion as archbishop of Washington should never have happened."

(Contributing to this story were Junno Arocho Esteves, Carol Glatz and Cindy Wooden.)