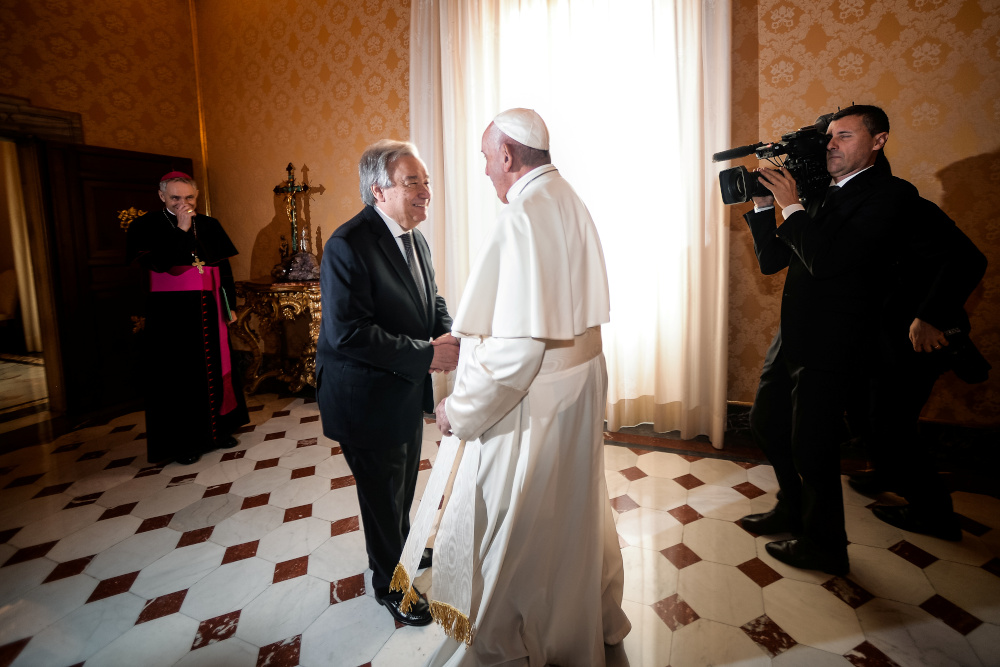 Pope Francis and the secretary-general of the United Nations said that, like millions of people around the world, during the Christmas season their thoughts turn to yearnings for peace and for the well-being of those in need.

After a 40-minute private meeting in the papal library Dec. 20, Francis and Antonio Guterres, the U.N. chief, recorded an eight-minute video, which was released a few hours later.

Francis began by saying that in the days before Christmas, "our gazes are turned toward heaven to entrust to God the people and situations dearest to our hearts."

Giving thanks "for all the good there is in the world," the pope especially singled out the people who dedicate their lives to helping others and refuse to give up working for a more humane and just world.

"We cannot, we must not look away when faced with injustices, inequalities, the scandal of hunger in the world, poverty, children who die because they do not have the necessary water, food or health care," Francis said.

"We cannot turn away when there is any kind of abuse of children," he said. "We must fight this plague together."

"We cannot close our eyes to our many brothers and sisters who, because of conflict and violence, misery or climate change, leave their homelands and often encounter a sad destiny," he said.

"We cannot remain indifferent when human dignity is trampled and exploited or to attacks on human life, both of the unborn and of any person in need of care," the pope continued.

And, he said, "we cannot, we must not look the other way when believers of different faiths are persecuted in several parts of the world."

When religion is used "to incite hatred, violence, oppression, extremism and blind fanaticism" or to force people to stand on the sidelines of their community life or even to migrate, he said, it "cries out to God for vengeance."

"But the arms race and nuclear rearmament also cry out to God for vengeance," he said. "And it is immoral not only to use, but also to possess nuclear weapons, which have such a destructive power that even just the chance of an accident represents a grave danger for humanity."

Francis called for attention to the wars that continue to take the lives of innocent people and pleaded for a greater commitment to dialogue and to the role of the United Nations.

"Let us recognize each other as members of one humanity and take care of our earth which, generation after generation, is entrusted to us by God for safeguarding," the pope said. "The commitment to reducing polluting emissions and for an integral ecology is urgent and necessary. Let's do something before it is too late!"

Guterres, for his part, thanked Francis for being "a messenger for hope and humanity — for reducing human suffering and promoting human dignity."

The "core values" of the U.N. charter align with many of the Catholic Church's efforts, he said, particularly efforts "to reaffirm the dignity and worth of the human person. To promote love of people and care for our planet. To uphold our common humanity and protect our common home."

"Our world needs that more than ever," Guterres said.

The U.N. leader also echoed Francis' focus on the Christmas season as "a time of peace and goodwill," and he denounced attacks on Christians, Muslims and Jews just because of their faith.

He praised the document on interreligious dialogue and human fraternity that Francis and Sheikh Ahmad el-Tayeb, grand imam of al-Azhar, signed in Abu Dhabi in February.

"The United Nations has also launched a 'Plan of Action to Safeguard Religious Sites' and a strategy to combat hate speech," Guterres said. "In these turbulent and trying times, we must stand together for peace and harmony."