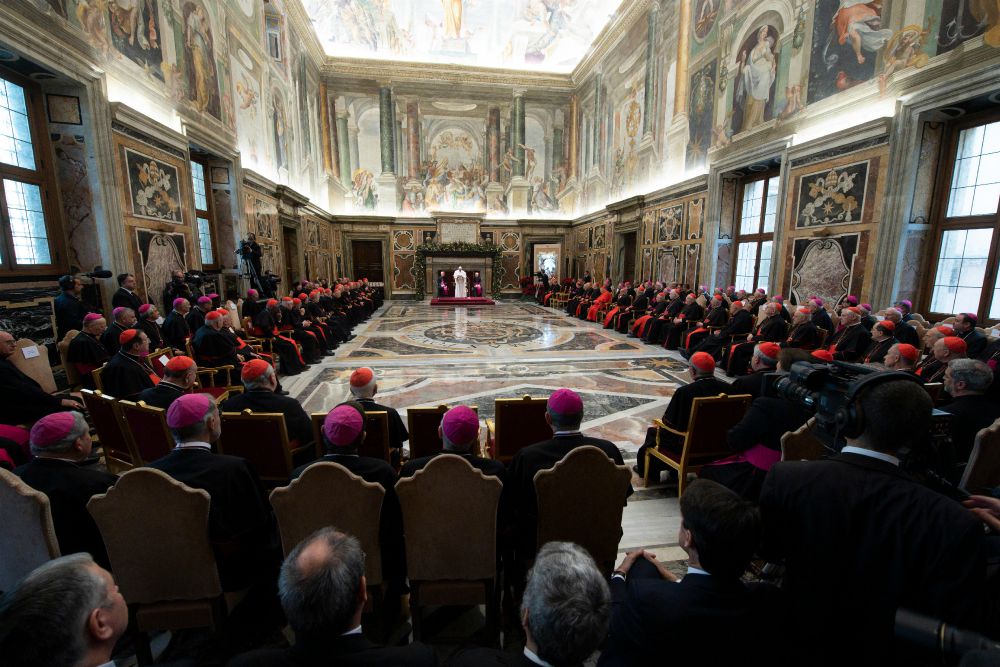 Pope Francis gives his annual pre-Christmas speech to officials of the Roman Curia and cardinals present in Rome Dec. 21, 2018, in the Clementine Hall of the Apostolic Palace. (CNS/Vatican Media)

The draft of Pope Francis' document to reorganize the Vatican's sprawling bureaucracy significantly reorients the mission of the Catholic Church's central command, emphasizing that officials must no longer consider themselves a "superior authority" but servants of the pope and the world's bishops.

The text of the proposed new apostolic constitution, obtained by NCR, also notably reorders the precedence of the Vatican's offices, downgrading the once all-powerful Congregation for the Doctrine of the Faith in favor of a new streamlined evangelization bureau charged with attracting followers by considering the "fundamental questions" of our era.

Praedicate Evangelium ("Preach the Gospel") likewise stresses that in the future the Vatican staff, known as the Roman Curia, should include lay men and women "in governing roles of importance and responsibility," including as heads of the various offices.

The current unsigned prologue to the document paints the broader goal for the renewed Vatican structure as helping the global institution undergo a "missionary conversion" that involves "reciprocal listening" between lay people, priests and religious, bishops, and the pope.

"The renewal … should reflect this fundamental reciprocity and should make it possible for the Church to come as close as possible to the experience of missionary communion which was lived by the apostles," the text states.

The new curial structure, it continues, "has the task of helping the Pope in the exercise of his primatial function, in relationship with the College of Bishops and with individual Bishops, and even with Episcopal Conferences and their affiliated associations."

"The Curia does not place itself between the Pope and the College of Bishops, but rather is at the service of both," affirms the draft.

The new apostolic constitution, which has been sent by the Vatican to bishops around the world for their review and suggestions, would replace Pope John Paul II's 1988 constitution Pastor Bonus, which had reorganized the Roman Curia for the first time since 1967.

The draft of the new text is the fruit of discussions among Francis' Council of Cardinals, which has met in Rome 28 times in person over the past six years to prepare the work.

Some leveling of hierarchy

One of the U.S. church's most noted ecclesiologists called the proposed text a "theological reimagination" of the Vatican's duties.

"The document contributes much toward a fundamentally different conception of the role and function of the Curia within the life of the church," Richard Gaillardetz, the Joseph Professor of Catholic Systematic Theology at Boston College, writes in a June 5 NCR commentary reviewing the draft.

Some of the changes that would be made by Praedicate Evangelium are immediately apparent.

Gone is the distinction between congregations, usually seen as having a type of executive power, and pontifical councils, usually seen as advisory. All major offices, except for the Secretariat of State, are now simply referred to as dicasteries. The Secretariat for the Economy retains its title but is listed separately from the other major offices.

"The renewal … should reflect this fundamental reciprocity and should make it possible for the Church to come as close as possible to the experience of missionary communion which was lived by the apostles."

The Secretariat of State, currently led by Italian Cardinal Pietro Parolin, remains the Vatican's highest office. But it is now followed in precedence by a new Dicastery for Evangelization, which would essentially take up a reorientation of the work of the former Congregation for the Evangelization of Peoples and the former Pontifical Council for the New Evangelization.

The newly renamed Dicastery for the Doctrine of the Faith, which was founded in 1542 by Pope Paul III as the Supreme Sacred Congregation of the Roman and Universal Inquisition, now falls into the third slot in order of precedence.

Between its short prologue and the 243 new general norms outlining the revised shape of the Vatican bureaucracy, the draft of Praedicate Evangelium contains a brief section that shares 12 guiding principles of the curial reform.

The first principle makes clear that Vatican officials should consider themselves "at the service" of bishops and episcopal conferences.

The second repeats Francis' frequent call for a "sound decentralization" of authority in the church, defining that concept as "leaving in the hands of diocesan Pastors the faculty of resolving in the exercise of the magisterium ordinarium the questions that they know well and that do not have to do with the unity of doctrine and of the communion of the universal Church."

The primary service of the Curia to local bishops, the third principle says, should be in giving advice and offering encouragement.

"This service of the Curia to the mission of the bishops and to communio is not based on an attitude of supervision or control and neither in deciding as a superior authority," it states. "The Roman Curia thus aims at serving reciprocal communion, a communion that is affective and effective, of the Successor of Peter and the Bishops."

The fourth principle suggests one focus of the Curia should be in collating "best practices" of the church around the world, so it can "act as a sort of platform and communication forum for the particular Churches."

The fifth principle makes clear that dicastery offices may be led by priests or laypeople, while the eighth principle says that in choosing staff "it is necessary to involve the laity more, even in important roles of leadership within the Church herself, especially in areas linked to temporal realities."

The 12th principle says that the membership of the curia "should reflect the universality and intercontinental nature of the Church."

The newly renamed Dicastery for the Doctrine of the Faith, which was founded in 1542 by Pope Paul III as the Supreme Sacred Congregation of the Roman and Universal Inquisition, now falls into the third slot in order of precedence. 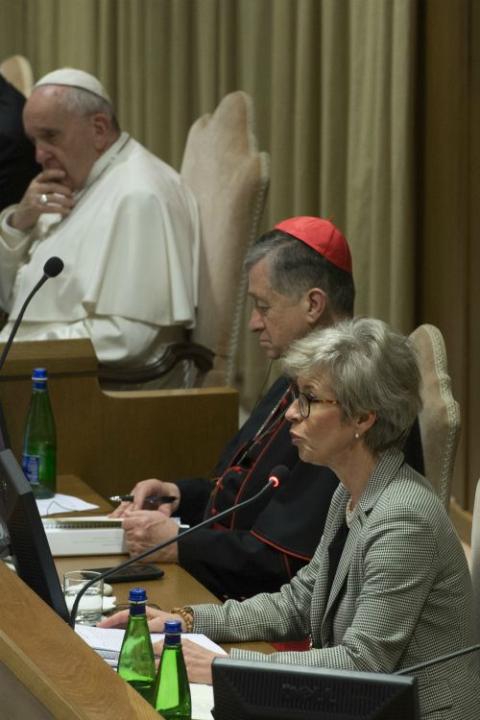 Linda Ghisoni, a canon lawyer who serves as a consultant for the Congregation for the Doctrine of the Faith, speaks during the second day of a meeting on the protection of minors in the church at the Vatican Feb. 22. Also pictured are Pope Francis and Cardinal Blase Cupich of Chicago. (CNS/Vatican Media)

Dicasteries for evangelization, doctrine and bishops

Establishing the new evangelical office, the text says the purpose of the bureau is to work so that Christ "may be known and witnessed to in words and works."

It creates two sections, or departments, within the office: one to focus on the "fundamental questions" of evangelization in today's world, another to work on the "institution, accompaniment and support" of new local churches.

The first section, it says, "has the task of studying … the fundamental questions of Evangelization and the development of a new Evangelization, identifying suitable forms, instruments and language."

"The Section encourages the study of the history of Mission in the course of the centuries and, in particular, its relationship with the complex phenomenon of colonialism and its consequences for Evangelization," it states.

The text also specifies that the first section should be concerned with the "recognition and affirmation of religious liberty in the pluralistic society of the world and in facing totalitarian tendencies."

With regard to the doctrinal dicastery, the draft explains that it will serve two major purposes: supporting the pope and bishops in proclaiming the Gospel, and "promoting and protecting the integrity of Catholic doctrine on faith and morals."

"The Dicastery favors and supports study and reflection on the understanding of faith and on the development of theology in different cultures, in the light of the challenges and the signs of the times, so as to offer an answer, in the light of faith, to the questions and arguments arising from the progress of the sciences and the evolution of civilizations," it states.

"This unites faithfulness to traditional doctrine with the courage to seek new answers to new questions," it continues.

The text mandates that the dicastery work in "close contact" with bishops and episcopal conferences, which it says have "some genuine doctrinal authority."

It also specifies that when the dicastery examines someone's writings for possible doctrinal issues it "seeks dialogue with their authors and presents appropriate remedies to pursue."

In a section outlining how the dicastery will continue to handle sexual abuse cases, the draft mandates that the doctrinal office work "in collaboration" with the Pontifical Commission for the Protection of Minors.

With regard to the doctrinal dicastery, the draft explains that it will serve two major purposes: supporting the pope and bishops in proclaiming the Gospel, and "promoting and protecting the integrity of Catholic doctrine on faith and morals."

The renamed Dicastery for Bishops remains responsible for advising the pope on possible candidates to be made prelates around the world. But the draft text also makes provision for the involvement of laypeople in that process, unlike Pastor Bonus.

Part of the process for deciding who might become a bishop is done, it states, "by taking into consideration the proposals of particular Churches and Episcopal Conferences, and after having consulted the members of the Presidency of the respective Episcopal Conference."

"In this process, it also involves in an appropriate way the People of God in the dioceses concerned," the text states.

Also unlike Pastor Bonus, the draft calls on the dicastery to establish criteria for the selection of bishop candidates, and says those criteria should be "periodically reviewed."

Some other notable changes in the draft document:

• The selection process in choosing the Camerlengo of the Holy Roman Church, the cardinal who is responsible for the Vatican's administration in the interim period between the death or resignation of the pope and the conclave to elect his successor, would be updated.

While the Camerlengo is currently chosen by the reigning pope, the draft constitution mandates that, at the beginning of a sede vacante, the office be automatically entrusted to the cardinal who leads the Council for the Economy, the group that oversees the Vatican's Secretariat for the Economy.

The current Camerlengo is Irish-American Cardinal Kevin Farrell, who was appointed to the role by Francis in February 2019. The current head of the Council for the Economy is German Cardinal Reinhard Marx.

• The Pontifical Commission for the Protection of Minors is confirmed as an "independent institution connected to the Holy See, with an advisory function at the service of the Holy Father."

The draft also makes clear that the president of the commission, currently Boston Cardinal Sean O'Malley, "exercises the authority of the Holy See" in developing and implementing guidelines for safeguarding of minors and vulnerable adults in the church.

• The revised norms make clear that the Secretariat of State is to "direct" the work of the Dicastery for Communications, which includes the Holy See Press Office.

• Although the draft continues to refer to Latin as the Vatican's official language, it clarifies that people can make appeal to the Roman Curia using "the languages that are more widespread within the Church."

• The text continues the tradition of having five-year terms of appointment for the heads and bishop-members of Vatican offices, but adds that officials should "normally" return to pastoral work after serving two terms.

Read this next: Francis' draft of curial reform fundamentally reimagines Vatican's role
A version of this story appeared in the June 28-July 11, 2019 print issue under the headline: Proposed document reorders Vatican's offices.