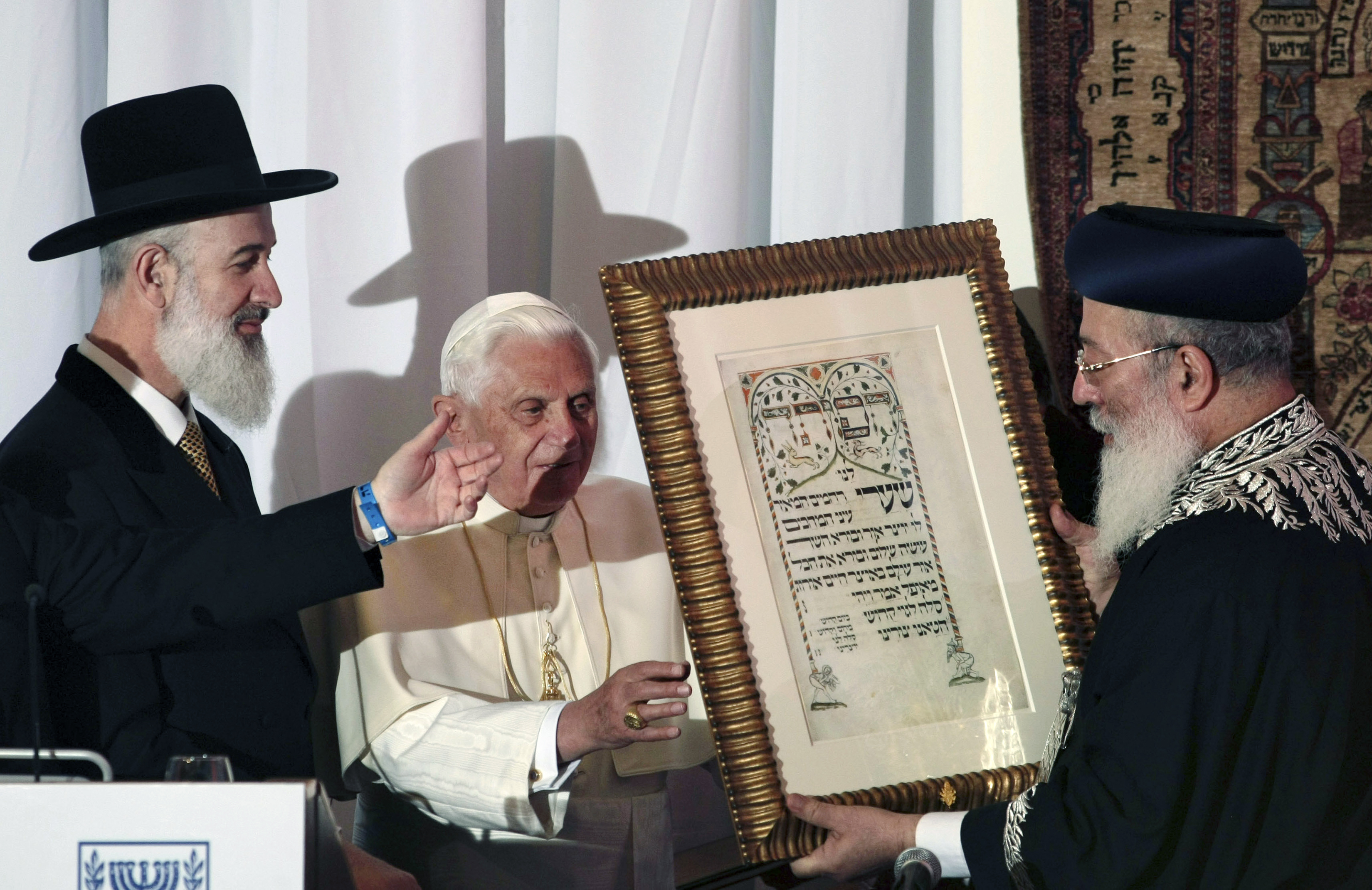 Then-Pope Benedict XVI receives a gift from Israeli chief Rabbis Shlomo Amar, right, and Yona Metzger, left, at the center for the Jewish Heritage in Jerusalem, on May 12, 2009. The pope told Israel's two chief rabbis that the Catholic Church is "irrevocably committed" to "a genuine and lasting reconciliation between Christians and Jews." (AP/Pool/Kobi Gideon)

Pope Emeritus Benedict XVI, head of the Roman Catholic Church from 2005 to 2013, is being accused of fostering anti-Semitism after publishing a controversial essay in a German-language theological journal.

Both Jewish and Catholic leaders say that the retired pontiff's essay on Jewish-Catholic relations in the current issue of Communio suggests he harbors anti-Semitic views despite his visits to synagogues and cordial relations with Jews during his papacy.Articles both criticizing and defending the essay have appeared in German, Austrian and Swiss media in recent weeks.

The central point of debate is Benedict's denial the Catholic Church ever adopted "supersessionism," the theological belief that God's covenant through Christ replaced the covenant God made with the Jewish people, and his insistence at the same time that the Christian lens for reading the Hebrew Bible (Old Testament) is the only valid one.

"Whoever describes the role of Judaism like this is building the foundation for a new anti-Semitism on a Christian basis," said Rabbi Walter Homolka, executive director of the School of Jewish Theology at Potsdam University in Germany.

"Benedict's suggestion that Christians should teach Jews how to read selected parts of the Hebrew Bible in a Christological way is very problematic," said the Rev. Christian Rutishauser, head of the Jesuit order in Switzerland and an expert on Jewish-Christian relations.

Benedict pledged at his surprise 2013 resignation that he would remain "hidden from the world" and not get involved in church debates. He wrote his essay as a private text last fall and passed it on to Cardinal Kurt Koch, president of the Pontifical Commission for Religious Relations with the Jews, who read it and convinced him to publish it.

Critics say the recent essay seems to walk back efforts in the past half-century to undo the Catholic Church's long history of anti-Semitism. After nearly two millennia of hostility, the Catholic Church's Second Vatican Council (1962-1965) acknowledged Christianity's close historical ties with Judaism and absolved Jews of the stereotype of being "Christ killers."

Pope John Paul II further developed this vision, visiting a synagogue, traveling to Israel, calling Jews "our elder brothers in the faith" and declaring that God's covenant with them was not superseded by the covenant through Christ. Benedict's essay in Communio, an international theological quarterly he helped found in 1972, seemed to walk some of that back to almost pre-Vatican II views. It has not yet been translated into English.

In the essay, Benedict notes that the term supersessionism – a sensitive issue for Jews who reject this view as Christian arrogance – was not listed in leading Christian theological lexicons. Building on this point, he argues that Christianity had never seen itself as completely overtaking Judaism, but just as replacing some Jewish rituals such as animal sacrifice with the Eucharist.

Vienna Chief Rabbi Arie Folger called this argument "an ahistoric revisionism that ignores the real suffering inflicted on Jews for centuries because of the doctrine of (the Church as) 'the true Israel.'"

Telling Jews how to read the Hebrew Bible in a Christian way seemed to suggest that Christians should revive efforts to convert them, Folger wrote in the Jüdische Allgemeine, the weekly newspaper of the Central Council of Jews in Germany.

Benedict interpreted the expulsion of the Jews from Jerusalem in the second century A.D. as part of a divine plan, but stated that the modern state of Israel did not have a religious significance for Judaism. Folger called this view "dishonest and dubious."

An association of Christian-Jewish dialogue groups said Benedict's essay undermines Vatican teaching since the 1960s and even contradicts declarations he had made as pope.

"The future of Christian-Jewish dialogue could falter in the face of this thoroughly critical questioning of its theological foundations," the German Coordinating Council of Societies for Christian-Jewish Cooperation said in a statement.

Some Catholic theologians have come to Benedict's defense. Bochum University theologian Thomas Söding said the essay was "not an irritation, but an inspiration for Jewish-Christian dialogue."

Likewise, Vienna University theologian Jan-Heiner Tück said the essay aimed not to roll back some Catholic positions but to further dialogue between the two religious traditions. Tück said that Benedict's essay left open the difficult question of what role in salvation Catholicism saw for Judaism since it viewed the Jewish covenant with God as unbroken but the Christian covenant as the true bond. A Vatican document in 2015 said both covenants were paths to salvation, but how this worked was "an unfathomable divine mystery."

"That should have been made clearer," Tück said. Benedict was not trying to roll back progress in Christian-Jewish dialogue, he said, "but maybe there's a certain gap in the description of the positive meaning of Judaism for salvation."

Critics said Benedict's essay could help explain why he rewrote the Latin text of the Good Friday prayer for the Jews in 2008. Until the late 1950s, the prayer had worshippers praying that the "perfidious Jews" would open their hearts and accept Jesus as their Lord. The revised 1970 prayer was softened, simply saying the Jews should grow in their love for God.

But in 2008, Benedict changed the wording so that Catholics would pray "that our God and Lord may illuminate their hearts, that they acknowledge Jesus Christ is the Savior of all men."

"Ten years ago, Joseph Ratzinger rewrote the Good Friday prayer in its Latin form, which was widely viewed as giving approval to evangelize Jews," said Homolka, referring to Benedict by his birth name. He said the new essay is "the theological key" to understanding that change.