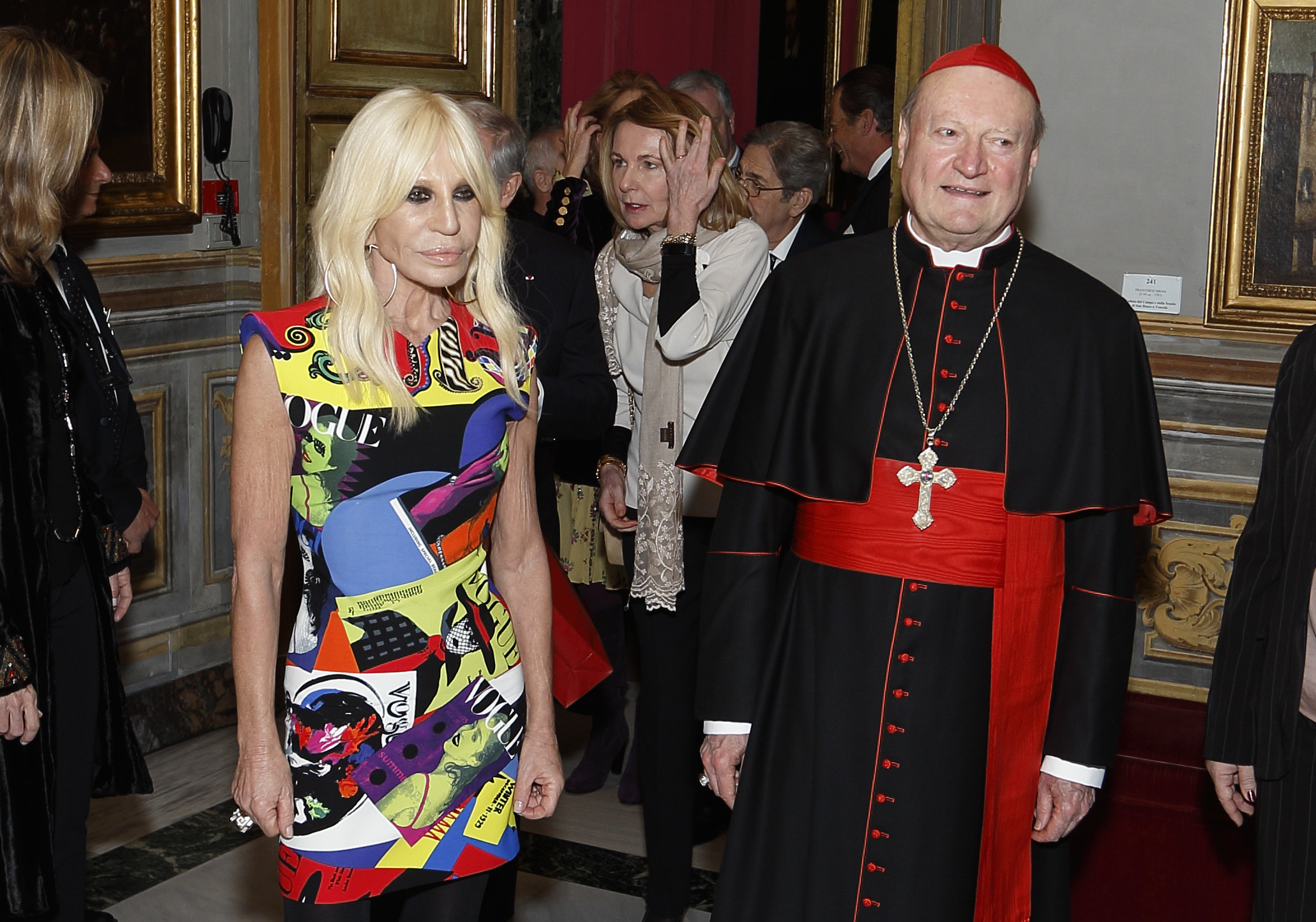 Italian fashioner designer Donatella Versace and Cardinal Gianfranco Ravasi, president of the Pontifical Council for Culture, arrive for a press presentation for the exhibit, "Heavenly Bodies: Fashion and the Catholic Imagination," at Galleria Colonna in Rome Feb. 26. The Vatican is loaning forty vestments and sacred objects for an exhibit at the Metropolitan Museum of Art in New York from May 10-Oct. 8. (CNS/Paul Haring)

When Pope Benedict XVI's custom-made red leather loafers became a signature part of his wardrobe after his election in 2005, Newsweek labeled him "a religious-fashion icon" and Esquire named him "Accessorizer of the Year."

While some critics saw the media's sudden fixation on papal fashion as frivolous and a way of trivializing the true meaning behind elegance in ecclesial dress, one top art curator said he saw this spotlight as actually raising "deeper, more profound considerations -- namely, the role that dress plays in the Catholic Church and the role that the Catholic Church plays" within the world of fashion's imagination.

Andrew Bolton, head curator of the Metropolitan Museums of Art's Costume Institute in New York, has now, over a decade later, turned those considerations into its most extensive exhibition ever.

The exhibit, "Heavenly Bodies. Fashion and the Catholic Imagination," includes more than 100 pieces from top designers inspired by Catholic symbolism and art, as well as 40 vestments and accoutrements from the papal office of liturgical celebrations. The exhibit will be spread over three locations in Manhattan May 10-Oct. 8, making it "a veritable pilgrimage" for visitors and disciples of faith and fashion, said Carrie Rebora Barratt, the museum's deputy director, at a press preview in Rome Feb. 26.

"Some might consider fashion to be an unfitting or unseemly medium by which to engage with ideas about the sacred or the divine," Bolton said at the preview, which was held in the gilded halls of the Colonna palace -- home of an Italian noble family that produced one pope and a number of cardinals and religious.

Surrounded by statues, frescoes, tapestries and paintings of biblical or bucolic scenes, Bolton said, "dress is central to any discussion about religion."

While religious wear and fashion are two distinct worlds, he said they are both "inherently performative" when it comes to the ritual of runway shows or the rite of a liturgy. And they both utilize "visual language" or "subtle visual codes" that often indicate, for example, the wearer's identity, function or position within a hierarchy or social status, he said.

Anna Wintour, editor of Vogue and a trustee of the museum, told reporters that "part of the power of the Catholic Church has been how they look and how they dress," referring in part to the triple-tiered papal tiaras covered with gold and precious gems on display.

"I mean, they have this extraordinary presence," said Wintour, whose ankle-length black and scarlet velvet dress with tunic collar subtly coordinated with the black and scarlet cardinal clothes of Cardinal Gianfranco Ravasi, head of the Pontifical Council for Culture.

The cardinal, who wrote the introduction to the exhibit's catalogue, was the perfect choice to be a kind of mediator between and interpreter of faith and fashion. He studied, taught and worked for many years in Milan, Italy's fashion capital, and as head of the culture council, he has developed numerous initiatives and networks fostering dialogue and cooperation between the church and the world of culture and the arts.

God is not just the creator, he said at the press preview, he is also "a tailor" as seen in the Genesis account of how the Lord made Adam and Eve, recently banished from Eden, "garments of skin."

Clothing carries with it not just the essential task of providing needed covering or protection from the elements, it can also carry social, cultural, moral and even spiritual and sacred meaning.

For example, liturgical vestments and ornaments are often crafted, Ravasi said, to exalt a kind of "richness" and opulence so it stands out from the everyday and the merely functional.

The ornate represents "the transcendent, religious mystery" because the divine is "splendid, marvelous, sumptuous, glorious," he said.

However, the cardinal wrote in the catalogue's introduction, there is risk of the superficial -- satirized in Federico Fellini's film, Roma, which depicted an absurd and "grotesque runway show of clerical fashions."

Jesus admonished against purely external shows of observance and criticized worshipers who "lengthen their tassels" just for the sake of appearances, the cardinal wrote.

Pope Pius XII initiated modern dress reforms in 1952 by snipping cardinals' nine-foot trains in half -- making footmen trailing behind, reams of fabric in hand, a remnant of the past.

But it was Blessed Paul VI who launched a major reform of clerical attire in keeping with the pursuit of simplification in the spirit of the Second Vatican Council.

Paul was the first to ditch the papal tiara as a sign that his authority did not come from earthly power and that he did not want earthly glory. He also reduced the height of the miter, stopped giving new cardinals wide-brimmed scarlet hats and ornate sapphire-studded rings, and asked cardinals, bishops and other prelates to bid goodbye to red shoes and silver buckles.

Many see Pope Francis' simpler sartorial style as also reminiscent of this desire to shed the superficial in pursuit of the essentials of inner conversion.

Ornate liturgical vestments, in fact, are meant to symbolize not the love of fashion, but the spiritual transformation of the person in putting on "the new clothes of Christ," according to an article in the Vatican newspaper, L'Osservatore Romano, in 2008.

"The pope, in short, does not wear Prada, but Christ," the newspaper said, writing in response to popular media misrepresentations.

Even the push for simplification should have limits, Ravasi said, because liturgical dress should help people lift their eyes, hearts and minds to the transcendent.

An example, he said, are the beautiful chasubles Henri Matisse designed, which are now in the Vatican Museums.

When Pablo Picasso saw the designs, he said, "These aren't sacred vestments, they are butterflies that fly in the sky of God." Ravasi said.

"And that, in the end, is the real meaning of the sacred vestment."