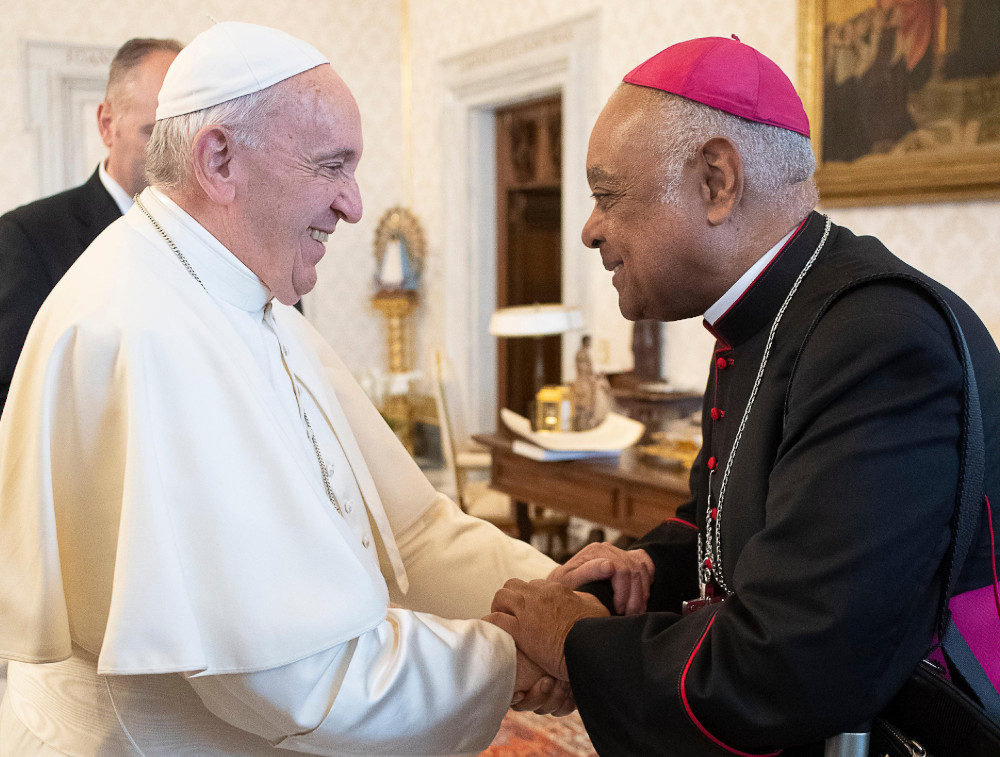 Archbishop Wilton D. Gregory of Washington was one of 13 new cardinals named by Pope Francis Oct. 25. Archbishop Gregory is pictured meeting the pope during a meeting with U.S. bishops making their "ad limina" visits to the Vatican in this Dec. 3, 2019, file photo. (CNS photo/Vatican Media)

Pope Francis, in a surprise announcement on Sunday, Oct. 25, named 13 new cardinals, nine of whom will be able to vote for a new pope when Francis dies or resigns.

The other four are over 80 years of age and therefore will not be able to vote in a conclave.

Among those chosen as a cardinal elector is Archbishop Wilton Gregory of Washington, D.C., the first Black cardinal in the U.S.

The announcement is a surprise because there are already 119 cardinal electors, just one under the limit set by Pope Paul VI in 1975. In the past, popes usually waited until there were more vacancies before appointing new cardinals.

Why is the pope in a hurry? Is the pope thinking of resigning? Or is he worried he might catch COVID-19 and die, since he rarely wears a mask?

After the consistory in Rome on Nov. 28, at which the appointees will officially become cardinals, there will be 128 cardinal electors, eight more than the canonical limit. Other popes have also exceeded the canonical limit; under John Paul II in 2001, the number grew to 135.

According to canon law, the men do not have to attend to be made a cardinal, which is important since some may not be able to travel because of the COVID-19 pandemic.

Over the last seven years, Francis has gradually remade the college of cardinals through his appointments. He has now chosen 57% of the 128 cardinal electors who could choose his successor. Another 30% were selected by Pope Benedict XVI, with the remaining 13% chosen by John Paul II.

Like his predecessors, Francis has appointed men who support his approach to the major issues facing the church.

Noteworthy is the way he has ignored some major sees (like Venice and Milan), which in the past would have had a place in the college of cardinals. Instead, he has looked for men who are concerned for the poor and are pastoral in their approach to their ministry, no matter where they serve.

One of the new cardinal electors is the Rev. Mauro Gambetti, who is not even a bishop. He is the custodian of the convent attached to the Basilica of St. Francis in Assisi, Italy, which is known for its interreligious outreach.

Francis has also made the college of cardinals more African and Asian and less European.

The conclave that elected Francis was 52% European. After the November consistory, it will be only 41% European. This is Europe's lowest share of the conclave ever.

The Italian proportion of the college has been reduced to 17%, what it was at the end of the John Paul papacy, before it was increased to 24% under Benedict. John Paul had reduced the number of Italian cardinals so he could appoint more cardinals in Eastern Europe.

On the other hand, the global south (Asia, Africa and Latin America) now has 45% of the college, the highest ever. The conclave that elected Francis was only 35% from the global south.

The percentage of U.S. cardinals (7%) after the consistory will also be lower than it has been in decades, with only nine cardinal electors from the United States.

Latin America, Francis’ area of the world, is up to 19% from 16%. This brings Latin America closer to where it was during the papacy of John Paul II.

Francis has also reduced the number of cardinals from the Curia, the Vatican's bureaucratic ranks. At his conclave, it was 35% of the college; now it is 24%, which is what it was at the end of John Paul’s papacy.

In summary, Francis has returned the college to the days of John Paul with regard to the Roman Curia, Italy and Latin America, but he has made it less European and more from the global south than it has ever been in the history of the church.

This is the right direction — except when it comes to the Vatican Curia; I would have preferred that no Curial officials be made cardinals or bishops.