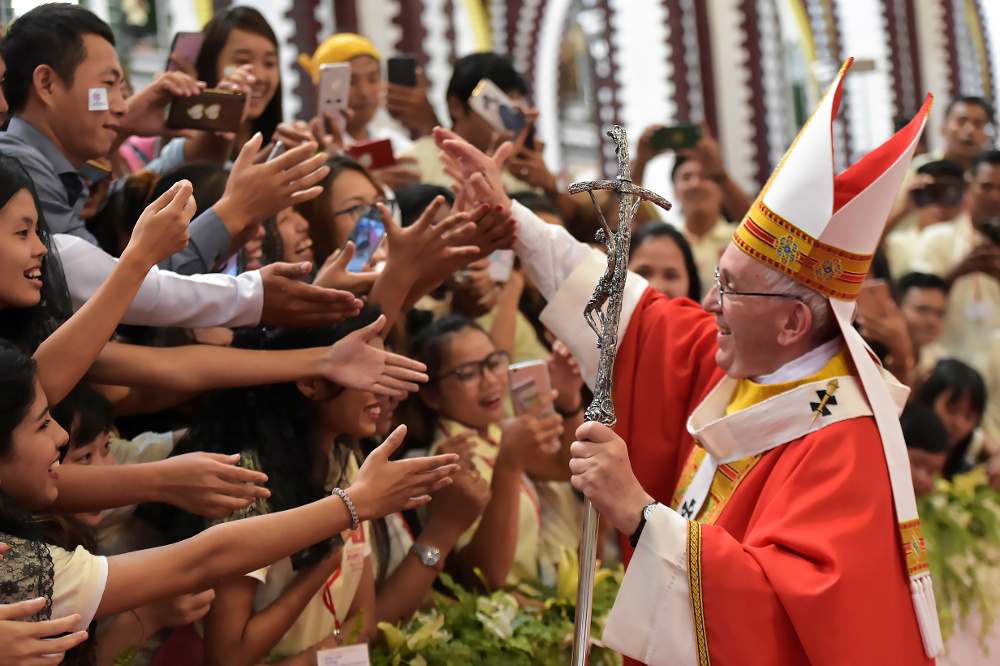 Pope Francis greets young people after celebrating Mass with youths Nov. 30, 2017, at St. Mary's Cathedral in Yangon, Myanmar. Foreign trips, a focus on the rights and needs of migrants and refugees and a Synod of Bishops dedicated to young people all are on the 2018 calendar for Pope Francis. (CNS/L'Osservatore Romano via Reuters)

Around 300 young people from all over the world will descend on Rome next week to have a conversation with Pope Francis about the future of the church. This meeting is in preparation for the Synod of Bishops on Young People, the Faith and Vocational Discernment, which will be held in October.

In holding this pre-synod meeting starting on March 19, the pope shows he understands that a bunch of old, celibate bishops are not going to come up with solutions for the Catholic Church's failure to attract or keep young people.

"(T)he church wants to listen to the voices, the sensibilities, the faith as well as the doubts and criticisms of young people," explained the pope. "We must listen to young people."

Almost half of Catholics who identify as unaffiliated (48 percent) left Catholicism before reaching age 18. As a result, only 18 percent of Americans between the ages of 18 and 34 identify as Catholic. In the United States, twice as many young people are unaffiliated with any religion.

Thus, while the data shows that the church is losing young people, it also shows there is a huge pool of young people in need of evangelization.

Those young people who do stay with the church are very loyal. About half of Catholic adults (56 percent) under age 30 say they can't imagine leaving the church, according to Pew.

The young people coming to Rome are from this pool of loyal young Catholics, who have been chosen by their national bishops' conferences, religious communities and seminaries to meet with the pope. One of their challenges will be to represent not only themselves but also those of their age group who are disenchanted with the church.

Coming from the United States are:

The University of Dallas is well-represented among the delegates with both Lopez and Prejean McGrady having gone to school there.

As she travels around the country giving talks, Prejean McGrady said, she's been asking "a lot of people questions about what they think the state of the church is right now and how the church is reaching young people."

She has found that young people have a great mistrust of institutions, including the church. "It does not help that the sex abuse crisis happened when we were all kids," she said in a phone interview.

Millennials are also strapped with debt, career decisions and trying to figure out life. These issues are pressing, "so sometimes faith and the church just get shoved to the side because Jesus is always going to be there and the church is never going anywhere," she says.

In addition, young people are "bombarded constantly by the noise of our culture" and "oftentimes the church loses the battle because of all of the more attractive gunk and junk that our culture throws in our faces."

But the real problem, according to Prejean McGrady, is that "for many, many years in our church, what we have done is just teach the facts of the faith — do this, don't do that; believe this, don't believe that — instead of engaging young people in trying to help them have a personal relationship with Christ, actually know him, and not just have ideas about him in their heads."

But young people should not just be looked at as a problem for the church. They are also a great asset.

Prejean McGrady believes that with that creativity and that connectivity, "they bring to the church the opportunity and the chance to do some really incredible and beautiful and unique things."

Let's hope the young people at their meeting with the pope — which I will go to Rome to write about — can help the church unleash all that creativity.

Never miss a column by Fr. Thomas Reese. Visit this page, sign up and get an email every time Reese posts a column.