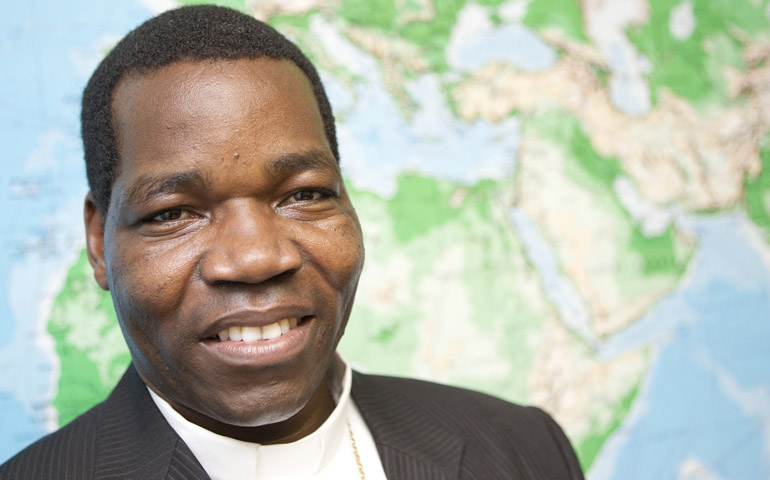 The head of the Sudanese bishops' conference says recent discussions with the Vatican's secretariat of state gave him hope Pope Francis will be able to visit war-torn South Sudan some time next year.

Bishop Eduardo Hiiboro Kussala, president of the bishops' conference for Sudan and South Sudan, said in an Aug. 11 interview that he is expecting a team from the secretariat to visit his country in coming months and they "might indicate that [Francis] is going to come."

Kussala, who heads the diocese of Tombura-Yambio in South Sudan, spent about two weeks in Rome in early August to meet with officials at various Vatican offices.

While Francis hoped to visit South Sudan in 2017, the Vatican announced in May that the trip would not take place this year. Media reports indicated the pope postponed the trip due to security concerns in the country, which has been in a state of civil war since 2013.

In a half-hour interview with NCR, Kussala said he came to Rome to "raise up the interest of the people of South Sudan that the Holy Father should come."

The bishop said that in his discussions at the secretariat of state, officials used the word "postponement" instead of "cancellation" for the planned trip in 2017.

"We will try our best, both in the church and in the community ... to put ourselves in order so that the Holy Father can come."
—Bishop Eduardo Hiiboro Kussala

"We are going to be committed to praying to God to make it happen, and also to prepare ourselves — looking at what didn't go well, why the Holy Father did not come," Kussala said of Catholics in South Sudan. "We will try our best, both in the church and in the community ... to put ourselves in order so that the Holy Father can come."

South Sudan is one of the world's newest countries, becoming independent from Sudan in 2011. A political struggle broke out in the country in December 2013, leading to a civil war in which an estimated 300,000 people have died and some 3 million have been displaced.

Due to the ongoing war, services available in the country are minimal. The arrivals section at the Juba airport, where Francis would likely land for any papal visit, is currently a small outdoor area with wooden planks covering muddy soil. 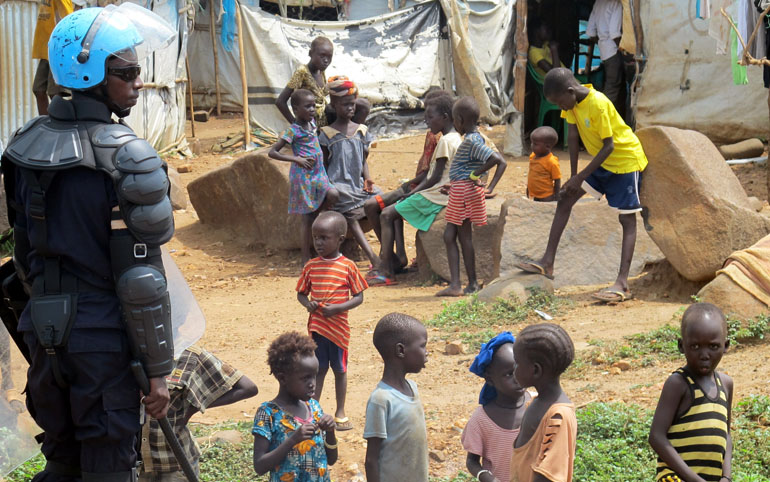 A U.N. peacekeeper keeps watch as children gather in a camp for displaced civilians in Juba, South Sudan. The heads of the member churches of the South Sudan Council of Churches criticized the country's political leaders "on all sides" for placing political and personal interests above the needs of ordinary people. (CNS/David Lewis, Reuters)

Kussala said that while the logistics of planning a papal visit in such circumstances are daunting, he does not think such concerns would stop Francis from visiting.

"I think there's a need for the Holy Father to go, like when he went to the Central African Republic," said Kussala, referring to the pope's previous visit to Africa in 2015. "It's just like, 'I go because my people are there.' "

When officials from the secretariat of state visit South Sudan in coming months the bishop hopes they will explain to Catholics there the current possibilities for the pope's visit. He said that when the 2017 trip was postponed people in his country were not given a good indication of why.

"An official, clear message from the side of the Holy Father, why he is not coming, was not made," said Kussala. "It was privately said without definition."

"Since people were already aroused to this news, it's good for the secretariat of state to come in and say what the Holy Father is intending to do," he suggested. "And it's probably during such a visit they might indicate that he is going to come and you people have got to fix one, two, three things."

Kussala was made the head of his bishops' conference in October 2016. He said he also came to Rome to meet people at the various Vatican offices.

The bishop wants to "understand where we are as a church — where are we moving and what is taking place — to update myself, to inform myself about my church and how I can best be able to get my brothers in South Sudan and Sudan to move according to the spirit within the church now."

One request Kussala made of the Vatican is to appoint bishops to the four dioceses in South Sudan that are currently operating without them.

"The dioceses have been too long without bishops," he said. "Without these bishops, the conference itself is weak."

"I am also here to ring the bell and say, 'Look, the Holy See has got to do something,' " said Kussala. "We have good priests, we have good people but we need to know what's the program and how we can get new bishops in."

Kussala, who has led his diocese since 2008, described the situation in his country as dire. He said that widespread famine is likely to occur if the fighting does not stop, as people who normally grow crops have been unable to do so.

"In South Sudan we are anxious for peace, desperately longing for peace," Kussala said. "All of us are very unhappy and we can't realize our plans and programs. The presence of war in South Sudan ... it takes hostage many initiatives."

"The war in the country has no meaning," he said. "There's really no proper political agenda for that war. There's no way it can be justified. This war has got to stop."