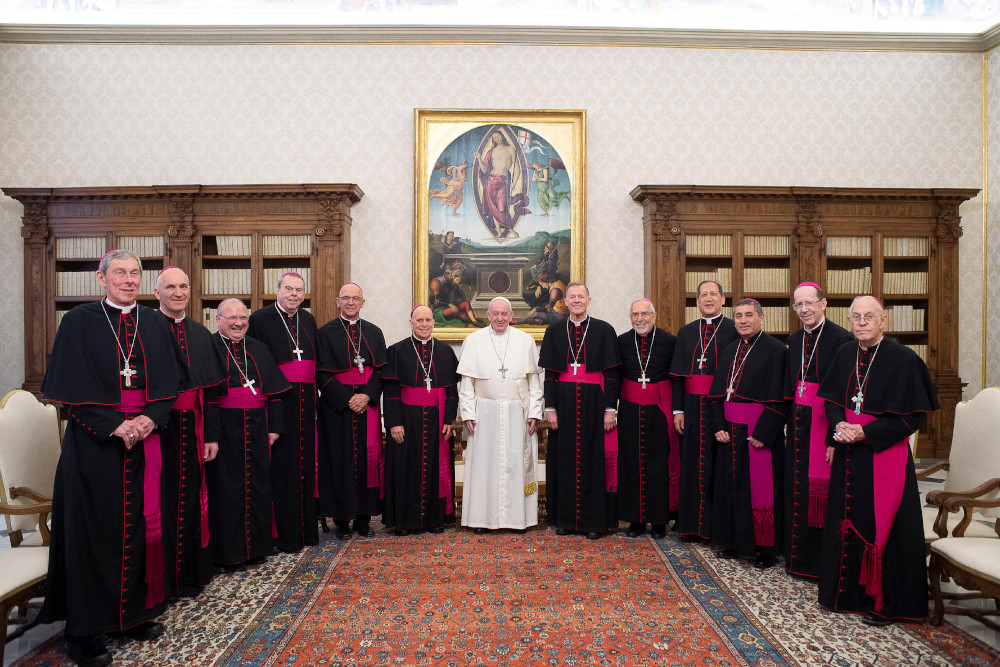 Talking about debates, differences and discernment, Pope Francis told a group of U.S. bishops that people focused on the possibility of ordaining some married men and women deacons for service in the Amazon will be disappointed in his apostolic exhortation.

The document came up Feb. 10 in the two-and-a-half-hour discussion Francis had with bishops from New Mexico, Arizona, Colorado, Utah and Wyoming, two of the bishops said. The bishops were making their "ad limina" visits to Rome to report on the status of their dioceses.

As is his normal practice, Francis told the bishops they could talk about whatever issues they wanted to raise, offering him information, asking him questions or even critiquing him, as long as the critique remained in the room.

Archbishop John C. Wester of Santa Fe, New Mexico, told Catholic News Service the pope told the bishops: "I want to hear what you have to say. Criticisms, complaints and questions are welcome. That's how the Holy Spirit works. The Holy Spirit can't work if we're all walking on eggshells and afraid to say anything."

The clerical sexual abuse crisis, immigration, polarization in society and in the church, training seminarians, the ministry of bishops and the role of women in the church were among the topics discussed, several bishops said.

Bishop Oscar A. Solis of Salt Lake City said Francis did not go into detail about "Querida Amazonia," but he did give the bishops the impression that the issues of ordaining married men and women deacons for ministry in far-flung communities would still be a matter for future discussion and discernment.

"He said he didn't actually believe in the ordination of married men, but what are you going to do with all those people who are deprived of the Eucharist," the bishop said. There are communities where a priest arrives only once a year for Mass.

Francis did warn the bishops that many in the media and the general public will be focusing on those two issues — married priests and women deacons —  while he wanted to focus on the social, pastoral, ecological and cultural challenges facing the Amazon region.

Wester said, "A lot of the media sometimes will glom on to something because it fits a particular agenda, or it sparks a particular controversy that they know is going to kind of bring a lot of future business."

The archbishop told CNS that Francis was asked for "a clarification" about the synod.

"The pope, very gently and very calmly, said, 'You know, this point was really not a big point," although it did come up, the archbishop said, without saying whether the issue was married priests, women deacons or something else. The gist of the pope's response, the archbishop continued, was "I don't even think at this point that it's something we're going to move on because I haven't sensed that the Holy Spirit is at work in that right now."

Summarizing his take on the discussion about the Amazon synod document, Wester told CNS, "It's what's not going to be said that people will notice."

The bishop said he believes the pope has specific hopes for the church in the United States.

"My impression is that he sees the United States is very blessed, but perhaps needing to learn how to share those blessings and how to be bring those blessings to the service of others," he said. One example of that, the bishop said, is immigration. "He would love to see countries do their part, not everybody can do everything and there are limits to what any country can do. But we do our part."

Highlight how "all of us are immigrants," Francis told the bishops, "As I look around the room and listen to your names, none of you are Native Americans so we need to realize that most of us have come from elsewhere," Kicanas said. The pope "would like to see a more generous society, a more giving society, a society that's attentive to those who are in need."

Wester said the pope "was very strong on" the importance of lay leadership, especially the participation of women in the life of the church.

"The gifts that women bring — it's so important not to exclude that, but to include that in our various schools and parishes, etc.," the archbishop said.

The pope also discussed the sexual abuse crisis and the need for the church to not only help survivors heal, but to heal itself.

"A wound has been opened, and in some cases, reopened" — for example, because of grand jury reports — "but we see that as providential in that Christ can help us now to heal," Wester said. "You have to open the wound in order for the healing to take place."

While it is painful to look back at the abuse that occurred in the church, Wester said the bishops "need to look so we can learn from history, to learn from our mistakes."

And in a world marked by "polarization, that division," Solis said, Francis emphasized the role of the bishop as a builder of unity, a person who must be willing to listen to a diversity of opinions, pray about decisions and trust the Holy Spirit will guide the discernment.

"He values differences of opinion," the bishop said. "I think he must have heard about the lack of civility" that seems to be afflicting public discourse in the United States. "People don't discuss anymore" but move immediately to "looking at each other with hatred."

Francis encouraged the bishops to be close to one another and to discuss their differences calmly and openly, Solis said. "You could see that he's concerned about it like a typical father when siblings are not in sync with one another."

Solis was celebrating the 16th anniversary of his ordination as a bishop Feb. 10 and said he spent it "engaging in a very, very personal and beautiful, Spirit-filled conversation our Holy Father, Pope Francis. It was the best gift I've ever received in my life. I forgot all my problems."