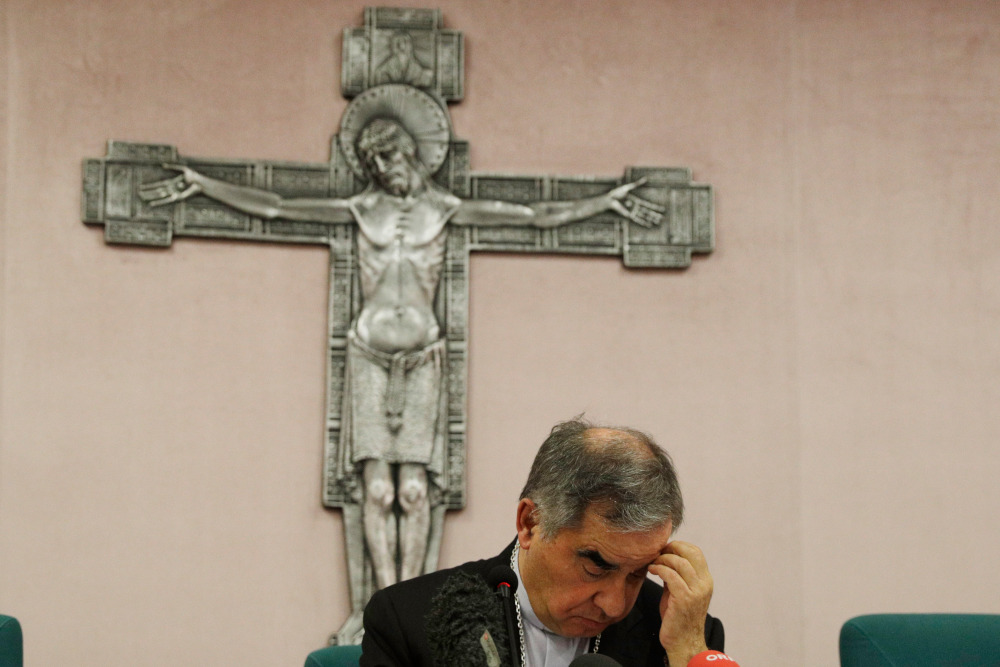 In this Sept. 25, 2020 file photo, Cardinal Angelo Becciu looks down as he meets the media during a press conference in Rome. The Vatican cardinal sacked by Pope Francis amid a corruption investigation is fighting back, suing an Italian newsmagazine and claiming that his ouster has deprived him of the chance of being pope and will undermine the legitimacy of a future papal election. (AP File/Gregorio Borgia)

The Vatican cardinal sacked by Pope Francis amid a corruption investigation is suing an Italian news magazine, claiming that his ruined reputation has eliminated his chances of becoming pope and will undermine the legitimacy of any future papal election.

Cardinal Angelo Becciu is seeking 10 million euros ($11.9 million) in damages, to be given to charity, in a lawsuit filed Nov. 18 in the Sassari, Sardinia tribunal against L'Espresso magazine, the weekly affiliated with Italian daily newspaper La Repubblica.

The 74-page complaint raises questions about the conduct of Vatican criminal prosecutors, suggesting they leaked information to L'Espresso as they sought to build a corruption case around the Holy See's 350 million-euro ($416 million) investment in a London real estate venture.

To date, Becciu has not been under investigation in that case or any other, he said in a statement announcing the lawsuit's filing.

Becciu resigned Sept. 24 as the prefect of the Vatican's saint-making office after Francis presented him with allegations he had sent some 100,000 euros ($119,000) in Holy See funds to a Sardinian charity controlled by his brother. Becciu admitted he sent the funds to the charity — not his brother — and told reporters he had done nothing wrong.

Becciu at the time of the transfer was the No. 2 in the Vatican secretariat of state, and enjoyed full authority to manage the department's substantial asset portfolio, including using it for charitable donations.

In his legal complaint, Becciu claimed that his ouster was a coordinated hit job with L'Espresso, which broke the story of the payment to his brother in a story that went to the printers Sept. 24.

The complaint alleges Francis had a copy of the magazine's article on his desk during the Sept. 24 meeting at which he sacked Becciu, suggesting an internal leak of the article to the Vatican. The L'Espresso's publisher has said some early editions "disappeared" from the printer that night and ended up on the pope's desk.

The complaint also says that nearly eight hours before Becciu's 6 p.m. meeting with Francis, L'Espresso created a webpage with an article entitled "This is why Cardinal Becciu resigned." Citing the timestamp of the site's metadata, the complaint argues that the magazine knew about Becciu's ouster before he did, suggesting coordination with the Vatican. 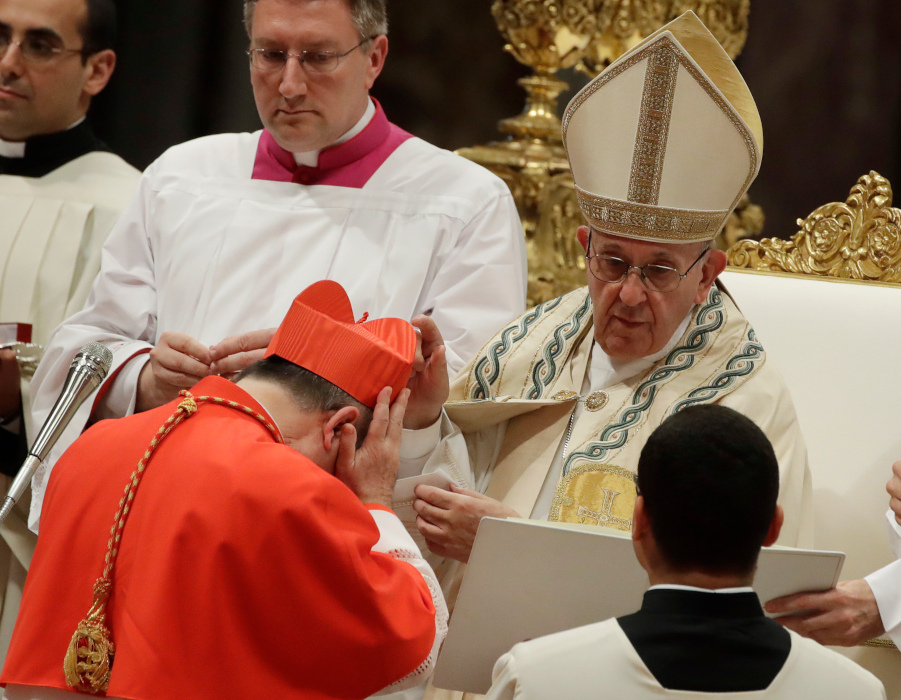 In this Thursday, June 28, 2018 file photo, Cardinal Giovanni Angelo Becciu receives the red three-cornered biretta hat from Pope Francis during a consistory in St. Peter's Basilica at the Vatican. Cardinal Angelo Becciu is seeking 10 million euros in damages, to be given to charity, in a complaint filed in the Sassari, Sardinia tribunal against L’Espresso, the weekly magazine of Italy’s La Repubblica daily. (AP File/Alessandra Tarantino)

L'Espresso has been leading the charge against Becciu, with a series of unsourced and speculative articles outlining prosecutors' case against him, some of them citing unnamed Vatican investigators but others offering no attribution for the magazine's claims.

Vatican prosecutors have been investigating the London real estate venture for over a year but haven't indicted anyone. Becciu's ouster came just days before the Vatican began showing off its efforts at greater financial transparency and accountability during a visit by evaluators from the Council of Europe's anti-money laundering committee. The committee, Moneyval, has faulted the Vatican tribunal in the past for failing to investigate or prosecute alleged financial crimes.

In his complaint, Becciu said the damage to his reputation had harmed him personally as well as the Catholic faithful at large.

As a powerful cardinal with pastoral, diplomatic and Vatican experience, Becciu had been considered "papabile" before his downfall. But the complaint said that by being forced to relinquish his rights as a cardinal, Becciu had lost his chance to one day become pope.

The complaint also said that Becciu's absence from a future conclave as a voting cardinal "could give rise to questions about the validity of the election," dividing the church and requiring a costly second conclave.

L'Espresso has stood by its reporting, calling his lawsuit a "stupefying attack." In Italy, journalists can be accused of both criminal and civil defamation.

The magazine's editor-in-chief, Marco Damilano, didn't deny the pope had an advance copy of its story, but said it was ridiculous to think that "a single journalistic article" caused him to fire Becciu.

"L'Espresso is accused of having not only influenced the current pope but also the Holy Spirit that could have chosen Becciu as his successor, if it weren't for an article to block his ascent," Damilano wrote.