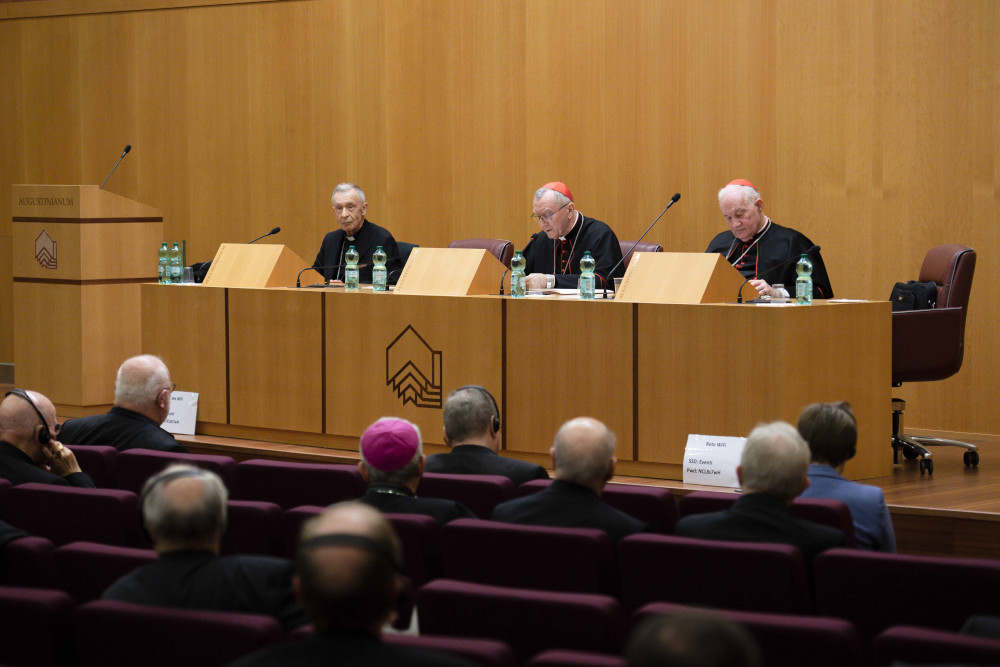 Curia officials -- Cardinal Luis Ladaria, prefect of the Dicastery for the Doctrine of the Faith; Cardinal Pietro Parolin, Vatican secretary of state; and Cardinal Marc Ouellet, prefect of the Dicastery for Bishops – meet Nov. 18, 2022, with the bishops of Germany making their "ad limina" visits to the Vatican. Other heads of Vatican dicasteries also attended the meeting across the street from the Vatican at the Augustinianum Institute for Patristic Studies. (CNS photo/Vatican Media)

Top Vatican officials expressed concern that, with the Synodal Path, the German bishops were giving up their role as shepherds and allowing participants to adopt positions in contrast to the faith of the universal church, particularly regarding sexuality and women's ordination.

The bishops met Nov. 18 with the heads of Vatican dicasteries to discuss the Synodal Path, which the German bishops' conference and the Central Committee of German Catholics launched in 2019 in response to the clerical abuse scandal. The Vatican published the texts of presentations Nov. 24.

Ladaria focused his remarks on Pope Francis' letter to German Catholics in 2019 about the Synodal Path and on how the local church and the universal church flourish together. "If they find themselves separated from the entire ecclesial body, they weaken, rot and die. Hence the need always to ensure that communion with the whole body of the church is alive and effective," the pope had written.

Ladaria acknowledged how, because of the abuse crisis, many Catholics "feel deeply betrayed by men and women of the Catholic Church" and "no longer have any trust in us bishops."

Praising the efforts of the Catholic Church in Germany to protect children and vulnerable adults and acknowledging that the Synodal Path was meant to strengthen those protections, the cardinal said that the texts adopted thus far seem to draw a direct connection between the structure of the church and the abuse crisis.

"It goes without saying that everything that can be done to prevent further abuse by clerics against minors must be done, but this must not lead to reducing the mystery of the church to a mere institution of power or to a prior consideration of the church as a structurally abusive organization that must be brought under the control of super controllers as soon as possible."

Ladaria also objected to the Synodal Path's treatment of sexuality, which gives the "general impression" that in church teaching on sexuality "there is almost nothing that can be salvaged, that it all must be changed."

"How can one not think of the impact this has on many faithful who listen to the voice of the church and try to follow its indications in their lives," he asked the bishops.

On the role of women in the church, he said, the texts of the Synodal Path seem to imply that "the fundamental dignity of women is not respected in the Catholic Church because they cannot have access to priestly ordination."

However, he said, church teaching "is not that women in the Catholic Church cannot have access to priestly ordination; the point is that one must accept the truth that 'the church in no way has the faculty to confer priestly ordination on women,'" because, as St. John Paul II taught, Jesus chose only men as his apostles.

While Ladaria said the Synodal Path's decision to request Francis reopen the question, rather than insisting the church change its teaching, was appreciated, the fact remains that the discussion is out of sync with the teaching of the universal church.

Both Ladaria and Ouellet expressed concern that the entire Synodal Path process has eclipsed the role of the bishops as successors of the apostles, called to guide the local churches and "authenticate the witness of the other disciples of the Lord."

Ouellet also praised the seriousness with which the church in Germany was trying to confront the abuse crisis and its attendant crisis of trust, and he lauded the involvement of the laity in the Synodal Path, although he said they seemed to "have played an equal if not preponderant role."

While saying he knows the bishops do not want to create a schism and are committed to making the preaching of the Gospel more credible in Germany, he said much of the Synodal Path seems to have responded more to "very strong cultural and media pressure" than to the Gospel.

"We seem to be facing a project for 'changing the church'" itself, even beyond the suggested "pastoral innovations in the moral or dogmatic field," Cardinal Ouellet said.

The Synodal Path, he said, seems already to be damaging "ecclesial communion, because it sows doubt and confusion among the people of God. Every day we receive spontaneous testimonies complaining about the scandal caused to the little ones by this unexpected proposal in breach of Catholic Tradition."

Ouellet also told the bishops he found "surprising" the attitude taken by the Synodal Path "toward the definitive decision of St. John Paul II concerning the impossibility for the Catholic Church to proceed with the ordination of women priests."

Questioning that decision, he said, "reveals a problem of faith with regard to the magisterium and a certain intrusive rationalism" that has more to do with personal opinions rather than faith.

And, he said, along with other questionable positions adopted by the members of the Synodal Path, the position on women's ordination "undermines the responsibility of the bishops" to guide the church and "appears to be strongly influenced by pressure groups."