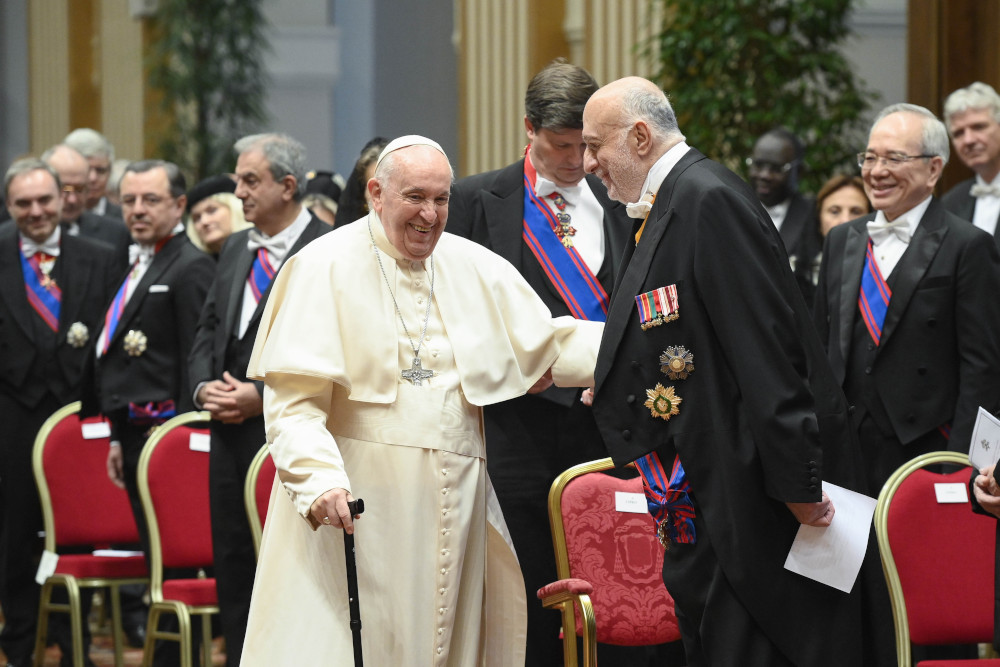 "Peace requires before all else the defense of life," which is threatened by the "alleged 'right to abortion,'" Pope Francis told ambassadors accredited to the Holy See.

The defense of life is "jeopardized not only by conflicts, hunger and disease, but all too often even in the mother's womb," the pope told the ambassadors Jan. 9 during his annual meeting with them to mark the start of the new year.

No one, he said, "can claim rights over the life of another human being, especially one who is powerless and thus completely defenseless."

Francis called on political leaders to "safeguard the rights of those are weakest and to combat the throwaway culture that also, tragically, affects the sick, the disabled and the elderly," and insisted governments have a "primary responsibility to ensure that citizens are assisted in every phase of human life until natural death."

The right to life, Francis said, also is put at risk in places where the death penalty is still used. He cited as an example Iran where, as of Jan. 9, four people have been executed in connection to nationwide protests that the pope characterized as "demanding greater respect for the dignity of women."

The death penalty, the pope said, is "always inadmissible, since it attacks the inviolability and the dignity of the person."

"We cannot overlook the fact that, up until his or her very last moment, a person can repent and change," he added.

Francis had entered the long Hall of Blessings above St. Peter's Basilica walking with a cane, a sign that the knee pain that had previously put him in a wheelchair may be improving.

The Vatican has diplomatic relations with 183 nations, plus the European Union and the Sovereign Order of Malta.

The pope told the ambassadors that "just once" it would be nice to meet them at the beginning of the year "simply to thank the Almighty Lord for his constant blessings, without having to list all the tragic events plaguing our world."

Instead, he said, it was time for a "call for peace in a world that is witnessing heightened divisions and wars."

Throughout his speech, he cited the encyclical "Pacem in Terris" written by St. John XXIII in 1963 after the Cuban missile crisis, which called for a ban on nuclear weapons.

"Sadly, today, too, the nuclear threat is raised, and the world once more feels fear and anguish," the pope said, referring to the statements of Russian officials in connection with the country's war on Ukraine.

The mere possession of atomic weapons is "immoral," he said, repeating a statement he made during a visit to Hiroshima, Japan, in November 2019, shifting the church's line which previously had only defined as immoral the use of atomic weapons.

"There is a need to change the way of thinking and move toward an integral disarmament, since no peace is possible where instruments of death are proliferating," he told the ambassadors.

In recalling the various ongoing conflicts in the world, Francis condemned the "third world war" fought in pieces around the world, which "involve only certain areas of the planet directly, but in fact involve them all."

The pope specifically discussed the war in Ukraine and called for an "immediate end" to the "senseless conflict."

Joseph Donnelly, the U.S. ambassador to the Holy See, told Catholic News Service he "appreciated the pope's words on the war in Ukraine, especially his comments pointing out that Russia's indiscriminate attacks on civilians and civilian infrastructure are crimes against God and humanity."

"The United States has unwavering solidarity with Ukraine and the Ukrainian people in the face of Russia's aggression," the ambassador said.

Francis said the war in Ukraine demonstrates that the current system of multilateral diplomacy "needs a profound rethinking" to "avoid procedures that give greater weight to some (nations) to the detriment of others."

The pope also called for greater international cooperation in addressing three areas of public policy: migration, the economy and work, and care of the environment.

While summarizing the Vatican's diplomatic achievements in 2022, Francis recalled that the Holy See and China agreed to extend their provisional agreement regarding the appointment of bishops in the country for another two years. The terms of the deal, which was first signed in 2018, are not public.