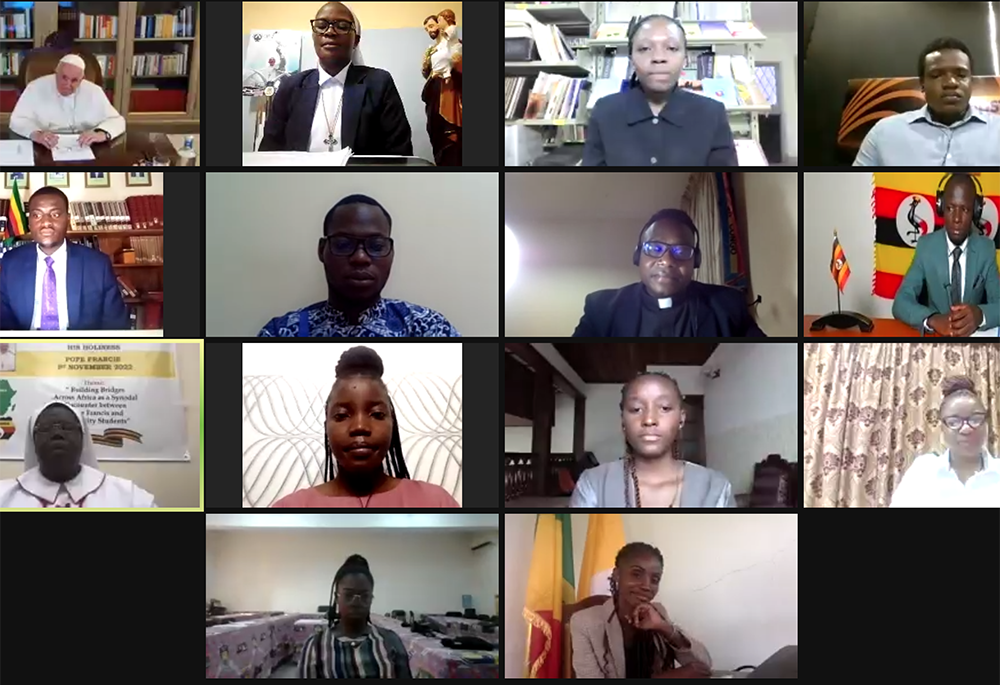 Pope Francis participates in Zoom dialogue with young people from across the African continent during the event "Building Bridges Across Africa: A Synodal Encounter between Pope Francis and University Students." (NCR screenshot)

Pope Francis on Nov. 1 participated in a virtual online dialogue with students from across Africa, telling them that while colonizing nations and multinational companies have long exploited the continent, African youth should be unafraid to organize together to fight for their future.

"Deforestation is a crime against humanity," said Francis. "We aren't fully aware of the environmental debt we are leaving to future generations."

"We are raping the Earth because we want wealth," the pope told the African students. "Be committed to battling those who want to rape the Earth."

Francis' searing criticism of both business and governments that have continually undermined the continent was a reoccurring theme during the "Building Bridges Across Africa: A Synodal Encounter between Pope Francis and University Students" event.

For nearly 90 minutes, the pope answered questions from university students and actively took notes along the way as they posed questions and shared their dreams and concerns.

Organized by the Pontifical Commission for Latin America, the Pan-African Catholic Theology and Pastoral Network, the Vatican's Dicastery for Communication, the communications department of the General Secretariat of the Synod, the Center for World Catholicism and Intercultural Theology at DePaul University and Loyola University Chicago, the event was a follow-up to a Feb. 24 dialogue with students from North, South and Central America.

During the new dialogue, Francis lamented that even decades since many African nations were granted independence, former colonial powers have still continued to exploit the vast natural resources of the continent. He referred to this as a "partial independence," adding that it "really isn't independence at all."

Pope Francis participates in Zoom dialogue with young people from across the African continent during the event "Building Bridges Across Africa: A Synodal Encounter between Pope Francis and University Students." (NCR screenshot)

Despite some minor technical glitches, the virtual event brought together students from nine different African countries with Zoom participants spanning four continents, as a part of Vatican's synod process, which aims to promote direct listening to voices from all across the Catholic Church.

Clevine Kavira, a student in the Democratic Republic of Congo, asked Francis if he was still planning to visit that country, after having to cancel a planned trip in July due to his mobility issues.

"When will you come to meet all of those women and mothers who have suffered rape to express God's compassion to them?" she asked, citing the violence caused by rebel groups in the country.

The pope used the moment to offer a sweeping condemnation of violence against women, which he said was all too common in parts of Africa.

"Women are often the protagonists of pain in Africa. They are often underestimated," said Francis. "Women aren't made to be used." The pope said that if all goes according to plan, he will travel to both Congo and South Sudan in early February.

"We are working on the trip, and I will surely be able to meet you," he told Kavira.

During the conversation, the 85-year-old Francis also spoke about the wisdom of the elderly and the need for intergenerational friendships, the importance of education and the destruction caused by war.

"Everything is focused on the sale of arms," Francis told Devis Ampereza, from Uganda, who asked the pope about Africans who are forced to leave their homes due to violence.

"Wars are waged to use older weapons and test newer ones," the pope lamented, adding that while the attention of the world is on Russia's invasion of Ukraine, there are also "forgotten" wars in Syria, Myanmar and throughout Africa.

On the need for a commitment to education, Francis told the students, many of whom are currently attending Catholic institutions throughout Africa, that the Catholic Church is committed to keeping schools and universities open.

Repressive governments, he said, shut them down as a way "to subjugate young people."

Despite the litany of problems raised by the young people and addressed by the pope, Francis repeatedly urged the students not to give up, telling them not to be afraid to collectively organize together in both political and social movements.

"The lack of the participation of young people is the death of a country," he said, adding that young people of faith have a special duty to be engaged, "otherwise they wouldn't be Christians."

"Politics is the highest form of charity because it's something that strives toward the common good," said Francis, who told the students to develop a deep political understanding of their countries, its peoples and their shared ideas.

"If the young people don't struggle, who will?" the pope asked.

Following the papal dialogue, Kenyan St. Joseph Sr. Leonida Katunge, who moderated part of the discussion, told NCR that 150 students in Kenya, divided into 5 cohorts, have spent the last month discussing the ways young people can be involved in the country's governance, looking at it from the perspective of the family, church and the broader society.

Those students, along with some 1,000 African students from across the continent, are taking part in a yearlong program that will continue to build the connections between students from other continents.

Their hope is that more than just a one-off papal dialogue, the young people will be able to take the message of Francis and work on responding to social questions beyond their universities, in their parishes and communities. They also want to forge shared connections with the students from North, South and Central America who participated in the virtual dialogue with Francis earlier this year.