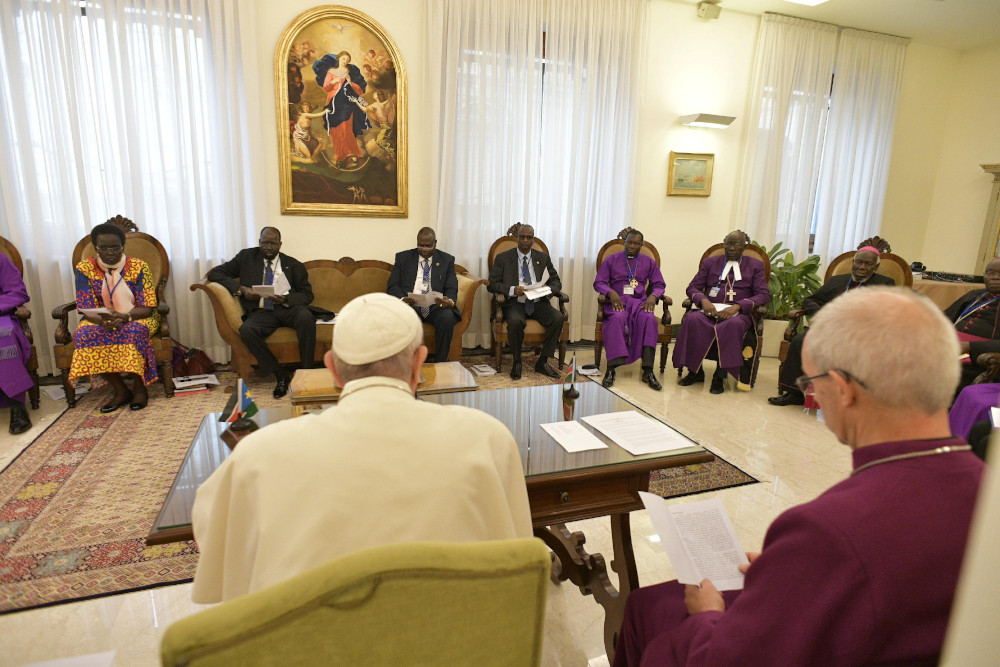 Pope Francis is seated next to Anglican Archbishop Justin Welby of Canterbury, England, spiritual leader of the Anglican Communion, during a meeting at the end of a two-day spiritual retreat with South Sudanese leaders at the Vatican in this April 11, 2019, file photo. (CNS photo/Vatican Media via Reuters)

ROME — Pope Francis has been forced to postpone his anticipated trip to the Democratic Republic of Congo and South Sudan in July due to ongoing knee pain, which has caused him to use a wheelchair in recent months.

A Vatican statement on June 10 said the trip was being postponed "at the request of his doctors, and in order not to jeopardize the results of the therapy that he is undergoing for his knee" and that it would be rescheduled to an undetermined later date.

The six-day trip, originally scheduled for July 2-7, was announced by the Vatican in March.

The South Sudan leg of the trip had originally been scheduled to take place in 2017, but was canceled due to ongoing security concerns in the country that has faced a decade-long civil war.

Francis was scheduled to travel to the country, both in 2017 and again this year, on an ecumenical pilgrimage with the archbishop of Canterbury and the moderator of the Church of Scotland, both of whom have been involved in the South Sudanese peace process.

The postponement comes two days after the Vatican released the list of some 70 international journalists who would be traveling with the pope.

The trip's cancellation marks the second time this year the pope has been forced to cancel travel plans due to his knee.

In February, the pope had to nix his plans for a day trip to the Italian city of Florence, where he was scheduled to meet with mayors and bishops from around the Mediterranean and celebrate an outdoor Mass.

As of now, the 85-year-old Pope Francis is still scheduled to make a July 24-30 trip to Canada, where he is expected to issue an apology on Canadian soil for the Catholic Church's involvement in the country's abuse-ridden residential schools for Indigenous children.

Last week, the Vatican also announced the pope would make a day trip to the Italian city of L'Aquila on July 28.

A version of this story appeared in the June 24-July 7, 2022 print issue under the headline: Pope Francis postpones July trip to Africa.