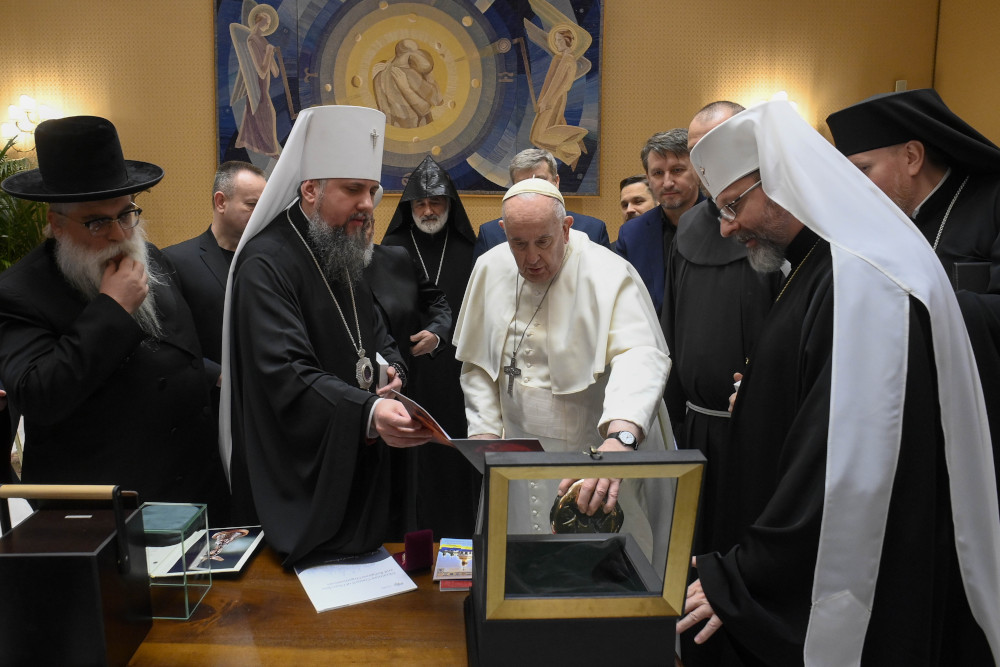 Metropolitan Epiphanius of Kyiv, head of the independent Ukrainian Orthodox Church, left, and Ukrainian Catholic Archbishop Sviatoslav Shevchuk of Kyiv-Halych, right, show Pope Francis a gift during a meeting with members of the Ukrainian Council of Churches and Religions at the Vatican Jan. 25, 2023. Rabbi Yaakov Dov Bleich, the chief rabbi of Kyiv, far left, looks on. (CNS photo/Vatican Media)

As war ravages Ukraine, the country cannot be divided among religious confessions but must be united behind "mother Ukraine," Pope Francis said.

"Jewish Ukraine, Christian Ukraine, Orthodox Ukraine" are not as important as Ukraine as a whole, the pope told members of the Ukrainian Council of Churches and Religions during a meeting at the Vatican Jan. 25.

"I thank you for your unity, for me this is a great thing, like the children of a family" that are dispersed, "but when the mother is ill, they are all together," he told them. "It is an example in the face of so much superficiality that we see in our culture today."

The delegation, composed of leaders of Ukraine's Jewish, Muslim and Christian communities, was in Rome Jan. 24-26. In addition to their audience with the pope, they met with officials from the Vatican Dicastery for Interreligious Dialogue and the Dicastery for Communication. Representatives from the council also were scheduled to join Francis at Rome's Basilica of St. Paul Outside the Walls for vespers to close the Week of Prayer for Christian Unity.

After apologizing for being a "slave to time" and needing to get to his weekly general audience, Francis put aside his prepared remarks and spoke off the cuff to the religious leaders, expressing his closeness to those working for peace in Ukraine.

"I am close to you and I regularly receive envoys from President (Volodymyr) Zelenskyy," the pope said. "I am in dialogue with representatives of the Ukrainian people, and this leads me to hear you and pray."

The pope also shared how at 11 years old he learned to serve the Byzantine-rite liturgy from a Ukrainian priest in Argentina. "From that moment my sympathy for Ukraine has grown," he said.

The delegation included Ukrainian Archbishop Sviatoslav Shevchuk of Kyiv-Halych, head of the Ukrainian Catholic Church; Archbishop Mieczyslaw Mokrzycki of Latin-rite Archdiocese of Lviv; representatives of the country's Orthodox, Armenian Apostolic and Lutheran churches; leaders of Ukraine's Jewish and Muslim communities; and representatives of the Bible Society, which is interdenominational.