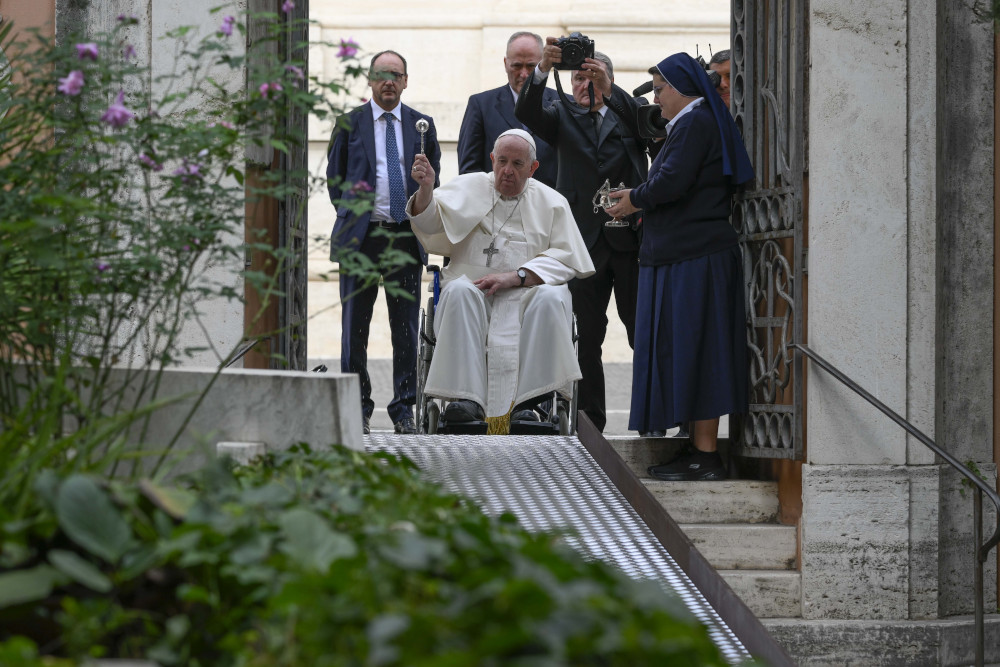 Pope Francis uses holy water to bless the tombs of those buried in the Vatican's Teutonic Cemetery, a medieval cemetery now reserved mainly for German-speaking priests and members of religious orders, during a visit Nov. 2, 2022, the feast of All Souls. (CNS photo/Vatican Media)

As Christians await their death and the final judgment of God, the Gospel tells them what they must do to be welcomed into heaven: love others because God is love, Pope Francis said.

In life "we are in the waiting room of the world," hoping to hear Jesus say, "Come, you who are blessed by my Father," the pope said during a Mass in St. Peter's Basilica Nov. 2, the feast of All Souls.

Francis celebrated the Mass with special prayers for the nine cardinals and 148 archbishops and bishops from around the world who died between Oct. 30, 2021, and Oct. 17 this year, including 14 bishops from the United States and four from Canada.

After the Mass, the pope visited the Vatican's Teutonic Cemetery, a medieval cemetery now reserved mainly for German-speaking priests and members of religious orders.

The Gospel reading at the Mass was St. Matthew's description of the last judgment when those who fed the hungry, welcomed the stranger and visited the prisoner are welcomed into God's kingdom, and those who neglected to care for others are sent into "the eternal fire."

While praying for those who have died, he said, the feast day also is a call to "nurture our expectation of heaven" and question whether one's strongest desires are for union with God or for earthly status and pleasures that will pass away.

"The best careers, the greatest achievements, the most prestigious titles and accolades, the accumulated riches and earthly gains -- all will vanish in a moment," the pope said.

But the Gospel of Matthew makes clear what will last, he said: love and care for others, especially the poor and those usually discarded by society.

And, he said, the Gospel also explains that God's final judgment is not like a civil court where the judge or jury sifts through every piece of evidence and weighs them all carefully.

In the divine tribunal, the only thing that counts "is mercy toward the poor and discarded: 'Whatever you did for one of these least brothers of mine, you did for me,'" the pope said. "The Most High is in the least, he who inhabits the heavens dwells among the most insignificant to the world."

Jesus' measure is "a love beyond our measures, and his standard of judgment is gratuitousness," he said. "So, to prepare ourselves, we know what to do: love those who are on his priority list, those who can give us nothing back, those who do not attract us" and do so without expecting repayment.

Too often, Francis said, instead of living the Gospel, people try to water down the words of Jesus.

"Let's face it, we have gotten pretty good at compromising with the Gospel," saying, "'Feeding the hungry yes, but the issue of hunger is complex, and I certainly can't solve it!'" or "'Welcoming migrants yes, but it is a complicated issue, it concerns politics,'" the pope said. With little objections "we make life a compromise with the Gospel."

"From simple disciples of the Master, we become teachers of complexity, who argue a lot and do little, who seek answers more in front of the computer than in front of the crucifix, on the internet rather than in the eyes of our brothers and sisters," he said. Believers become experts "who comment, debate and expound theories, but do not know even one poor person by name, have not visited a sick person for months, have never fed or clothed someone (and) have never befriended someone in need."

The Gospel teaches people how to live while awaiting death and God's judgment -- "loving because he is love," Francis said. God "waits for us among the poor and wounded of the world. And he is waiting to be caressed not with words but with deeds."