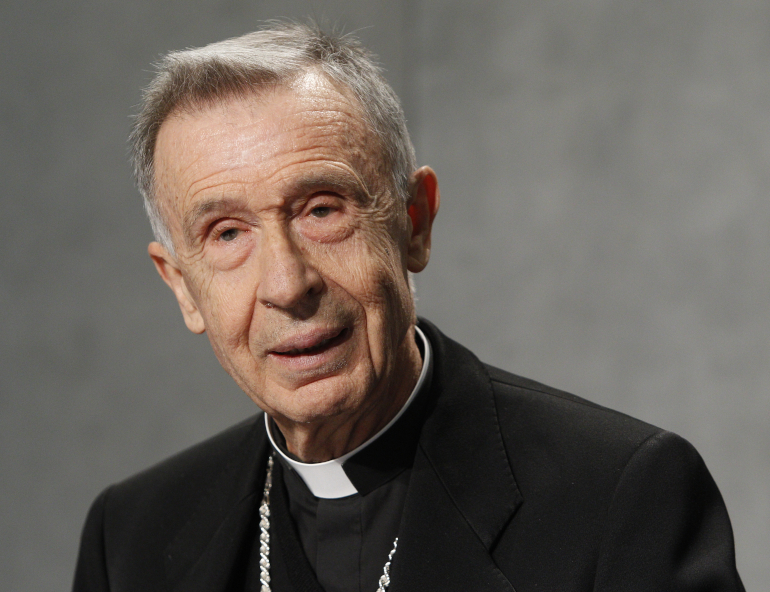 Cardinal Luis Ladaria, prefect of the Congregation for the Doctrine of the Faith, speaks at a 2018 news conference at the Vatican. (CNS/Paul Haring)

The Vatican is firmly reiterating its objection to the legalization of euthanasia and assisted suicide, calling the intentional killing of sick patients an "intrinsically evil act" akin to murder and warning that legislators who approve such laws "become accomplices of a grave sin."

A new Sept. 22 document from the Congregation for the Doctrine of the Faith likewise directs hospital chaplains and pastors that patients planning to end their lives cannot be granted access to the sacraments, including both confession and anointing of the sick.

The new text, titled "Samaritanus bonus: On the care of persons in the critical and terminal phases of life" and approved by Pope Francis June 25, also touches on a range of other sensitive medical care issues beyond euthanasia and assisted suicide and will likely be read closely by administrators of Catholic hospitals.

Although the text may not offer any surprises for those familiar with Catholic teaching on end of life issues, it appears notable for its firm language, especially regarding what actions Catholics can and cannot undertake.

In one example, the document bluntly warns Catholic hospitals that they must "abstain from plainly immoral conduct."

"Any action that does not correspond to the purpose and values which inspire Catholic healthcare institutions is not morally acceptable and endangers the identification of the institution itself as 'Catholic,' " the text states.

The document specifically forbids Catholic hospitals from making referrals for patients requesting euthanasia. "Such choices cannot be morally accepted or supported in their concrete realization, even if they are legally admissible," it says. 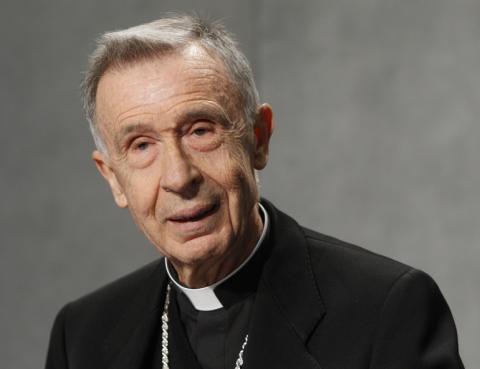 Cardinal Luis Ladaria, prefect of the Congregation for the Doctrine of the Faith, speaks at a 2018 news conference at the Vatican. (CNS/Paul Haring)

Euthanasia or assisted suicide has recently been legalized in a number of European countries and in several U.S. states, usually with the intended aim of helping a terminally ill patient end their life when they are facing a situation of intense suffering.

Although several local bishops' conferences have responded to such laws, the Vatican congregation says it felt compelled to write its own document "in order to provide precise and concrete pastoral guidelines to deal with these complex situations."

Cardinal Luis Ladaria, the head of the Vatican congregation, said at a press conference presenting the text that a new document "seemed necessary and opportune" because of the way governments are becoming "more permissive" about euthaniasia.

Beyond the act of euthanasia itself, the text criticizes use of previously written legal orders such as do-not-resuscitate orders, saying that they can be misused and can prevent doctors from pursuing life-saving treatments.

"These protocols cause serious problems regarding the duty to protect the life of patients in the most critical stages of sickness," it states.

The document also calls for legislators in jurisdictions that have legalized euthanasia to allow medical professionals to exercise conscientious objection to such laws.

"Governments must acknowledge the right to conscientious objection in the medical and healthcare field, where the principles of the natural moral law are involved and especially where in the service to life the voice of conscience is daily invoked," it states.

The Vatican document spans about 17 pages. Beyond euthanasia, the text also covers Catholic teaching on withdrawing nutrition from patients in a vegetative state, on when patients can choose not to pursue so-called "aggressive treatments," and on care for terminally ill infants.

On care for those in a vegetative state, the document says such patients have "the right to nutrition and hydration, even administered by artificial methods."

It also acknowledges, however, that "in some cases, such measures can become disproportionate, because their administration is ineffective, or involves procedures that create an excessive burden with negative results that exceed any benefits to the patient."

In terms of whether patients should be encouraged to pursue so-called "aggressive treatments" to prolong their lives, text states: "It is lawful according to science and conscience to renounce treatments that provide only a precarious or painful extension of life."

"It is not lawful to suspend treatments that are required to maintain essential physiological functions, as long as the body can benefit from them," the text continues, naming treatments such as: "hydration, nutrition, thermoregulation, proportionate respiratory support, and the other types of assistance needed to maintain bodily homeostasis and manage systemic and organic pain."