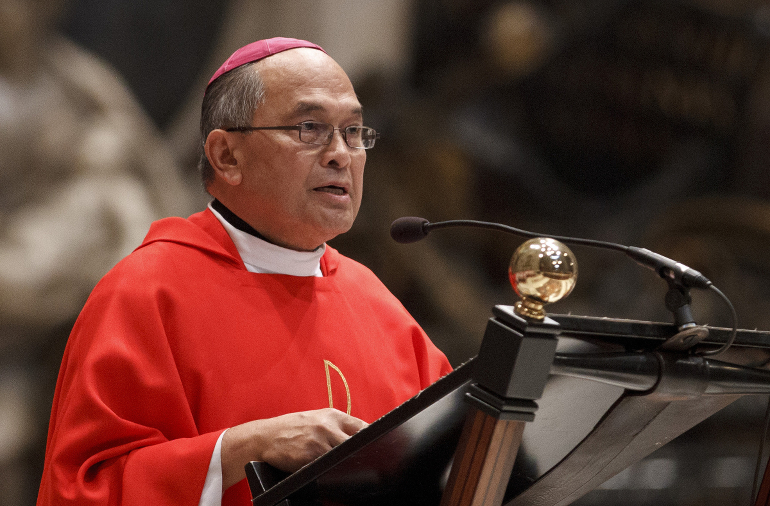 Archbishop Anthony Apuron of Agana, Guam, is pictured in a 2012 photo at the Vatican. (CNS/Paul Haring)

This story was updated at 12:30 p.m. CST with information of an appeal.

A Vatican tribunal has found Guam Archbishop Anthony Apuron, who had been accused of sexually abusing young men decades ago, "guilty of certain of the accusations," imposing a penalty of removal from office and a prohibition from living on the U.S. island territory.

A five-judge apostolic tribunal of the Congregation for the Doctrine of the Faith announced its verdict in Apuron's canonical case March 16 with a brief press release. The release did not specify of which exact acts the archbishop had been found guilty.

"The canonical trial in the matter of accusations, including accusations of sexual abuse of minors ... has been concluded," states the release. "The Apostolic Tribunal ... has issued its sentence of first instance, finding the accused guilty of certain of the accusations and imposing upon the accused the penalties of privation of office and prohibition of residence in the Archdiocese of Guam."

Apuron, a Guam native who had led the island's only diocese since 1986, was placed on leave by Pope Francis in June 2016 after a series of accusations about abuse of young men in the 1960s and 70s were made public.

Francis named an apostolic administrator to run the archdiocese for several months and then named Coadjutor Archbishop Michael Byrnes, a former auxiliary bishop of Detroit, to take over.

As coadjutor, Byrnes would automatically become full archbishop of the archdiocese with Apuron's removal from office. But the doctrinal congregation's statement made clear that Apuron still has the right to appeal the ruling, and that during such an appeal the penalties against the archbishop are suspended.

In a statement through his lawyer later on March 16, Apuron said he had already appealed the ruling. "I am innocent and I look forward to proving my innocence in the appeals process," said the archbishop.

U.S. Cardinal Raymond Burke, a noted canon lawyer, has served as the presiding judge in the Vatican's canonical trial.

Apuron, 72, has been accused of having inappropriate physical contact with at least five young boys. The allegations emerged in May 2016 when one of the boys, now in his 50s, came forward, prompting others to do the same.

Apuron has denied the allegations against him, and Guam civil authorities have not charged him with any crimes. He is however the subject of multiple civil lawsuits.

The Guam archbishop was spotted in Rome in February, when he was seen in a wheelchair during a weekly Wednesday audience with Francis. Several outlets reported at the time that Apuron greeted the pope and told him: "Holy Father, I wanted to see you before I die."

Announcement of the verdict in Apuron's case had been expected for months. Byrnes, the coadjutor archbishop, announced in October 2017 that the judges had come to a decision.

A version of this story appeared in the April 6-19, 2018 print issue under the headline: Vatican tribunal finds archbishop guilty of 'certain' accusations.