Skip to main content
A version of this story appeared in the Sept. 25-Oct. 8, 2015 print issue under the headline: Volunteers send notes from the field. 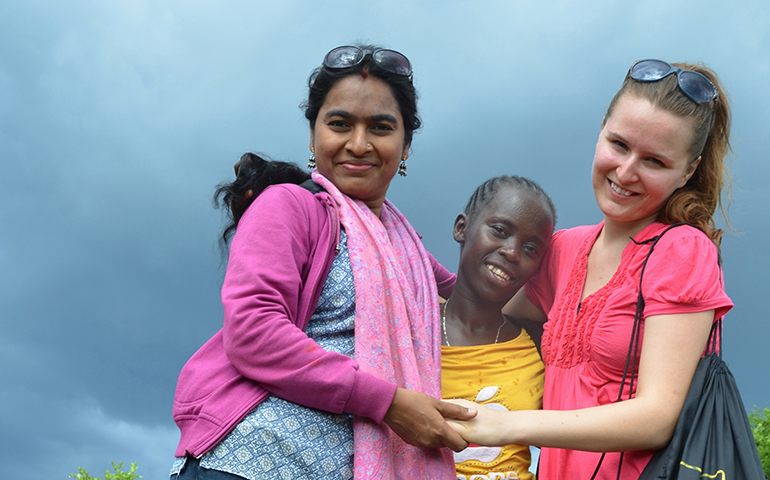 Angela Mahoney, right, with a teacher from India and an Ethiopian student

Roughly 200 programs offering volunteer service opportunities of a year or more are affiliated with the Catholic Volunteer Network. Working with the network, Global Sisters Report launched its summer 2015 blogging project with reports from four young women working in the ministries of Catholic sisters around the world. Below is an example excerpt, from Angela Mahoney's blog about her experience as a volunteer in Ethiopia. For the full stories, read more at GlobalSistersReport.org/series/notes-field.

In March, I joined the Salesian sisters' mission in Dilla, a small town in southern Ethiopia. The mission here was taken over by the Salesian sisters in the mid-1980s. Initially, four sisters ran the mission, helping manage two kindergarten classes and the infirmary. A few years later, they started a sewing class and, after a while, a computer course.

A Salesian priests' compound is next door, so I can see the parish church from my window and it only takes a couple minutes to walk to Mass in the early morning. During Mass, women here cover their head with a netela, which is a big white shawl with embroidery at the ends.

During Mass, the doors and windows of the church are often left open to welcome in the cool air. But this sometimes welcomes in other things, like birds, which wildly circle overhead like over-caffeinated creatures. Either the birds are eating coffee beans off the plants outside or they are extracting energy from the drumming and lively singing of the congregation.

There is a legend here about Kaldi, a goat herder, who is said to have discovered coffee after his goats grazed in a field with coffee plants and were filled with energy. So, all you coffee lovers out there, you can say a quick prayer for Ethiopia and her people.