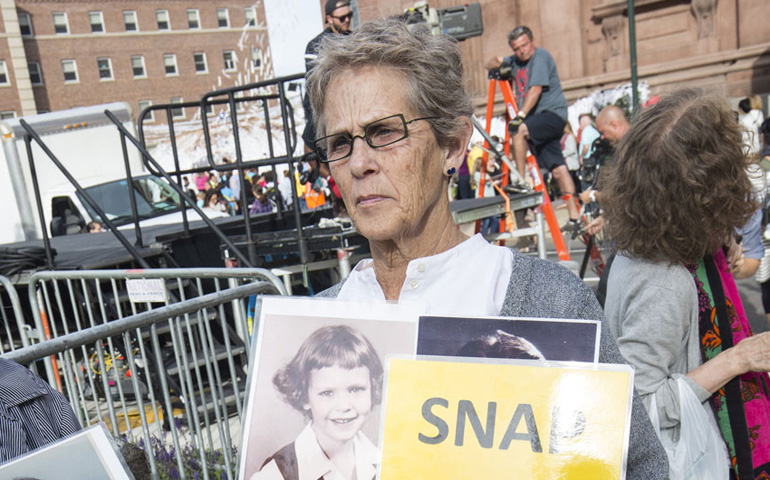 Barbara Dorris participates in a Survivors Network of those Abused by Priests demonstration in front of the Cathedral Basilica of Sts. Peter and Paul in Philadelphia, Sept. 25, 2015. (CNS/Joshua Roberts)

Three women survivors of clergy sexual abuse shared deeply personal stories during a Nov. 27 storytelling event, each revealing layers of pain, sadness and hurt exacerbated by the realization that they were trapped within a male-dominated structure that ignored their stories and demanded silence.

Peruvian Rocio Figueroa Alvear, once the head of the women's branch of a burgeoning but now disgraced lay religious movement, recounted being forbidden to speak of her abuse by its male second-in-command, and threatened with publishing of false claims against her own conduct should she disobey.

American Barbara Dorris, long known as a leader of the Survivors Network of those Abused by Priests or SNAP, spoke publicly for the first time about her rape by a priest as a 6-year-old girl, and how it continued for years afterward.

Saying she did "everything in my power" to hide her pain from her devout parents and family, Dorris only came forward as a parent when she recognized warning signs in the behavior of another priest on a playground with children.

And German Doris Wagner tells of the calamitous fifth year in her mixed-gender religious order, when a male superior came into her room at night and raped her.

"Instantly, I knew ... that if I spoke about this, the community would blame me and not him," she says. "And so I kept silent."

The three harrowing accounts were part of a Nov. 27 testimony-sharing and panel discussion event in Rome, held less than a mile east of the Vatican and meant to raise up women's voices in the revived discussion of clergy sexual abuse after a spate of revelations globally this year.