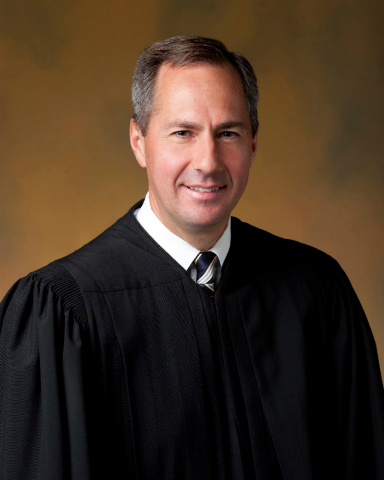 Pundits have whittled the new president's list of likely candidates to two men, both of whom currently serve as appellate court judges: Neil Gorsuch, of the 10th U.S. Circuit Court, and Thomas Hardiman, now on the 3rd U.S. Circuit Court.

An announcement is expected on Jan. 31. In the meantime, here are five faith facts about each of them.

1. Gorsuch, 49, is the son of Anne Gorsuch, President Ronald Reagan's administrator of the Environmental Protection Agency. Like his mother, Neil Gorsuch attended Catholic schools, in his case the Jesuit-run Georgetown Preparatory School in Washington, D.C. After college and law school at Columbia and Harvard respectively, Gorsuch clerked for Justice Anthony Kennedy, who is also Catholic.

2. Gorsuch has supported religious groups against the U.S. government.  Two major religious liberty cases wound up before Denver's 10th Circuit Court of Appeals, where Gorsuch has served since 2006: The Little Sisters of the Poor v. Burwell and Hobby Lobby v. Burwell. In both cases, religious organizations — a Catholic order of nuns and the evangelical owners of a craft store chain — sought exemptions from providing birth control under the Affordable Care Act, or Obamacare. “All of us face the problem of complicity,” he wrote in support of Hobby Lobby. Government should not force those with “sincerely held religious beliefs” to comply with “conduct their religion teaches them to be gravely wrong.” The Supreme Court agreed in a 5-4 decision in 2014.

3. Gorsuch opposes euthanasia and assisted suicide, two positions that coincide with Catholic doctrine and the views of a majority of Christian denominations. Gorsuch wrote a book titled “The Future of Assisted Suicide and Euthanasia” that argued for maintaining laws against assisted suicide and euthanasia.

4. Gorsuch has not ruled in an abortion-related case. But he is lauded by many conservative religious people and groups who seek the overturning of Roe V. Wade because of how he wrote about the value of life in his book. “All human beings are intrinsically valuable and the intentional taking of human life by private persons is always wrong," he wrote. “The law ... doesn’t just apply to protect popular religious beliefs: it does perhaps its most important work in protecting unpopular religious beliefs, vindicating this nation’s long-held aspiration to serve as a refuge of religious tolerance.”

5. Gorsuch reminds some people of Scalia, a conservative, an originalist whose decisions aligned with Catholic doctrine. University of Denver law professor Justin Marceau told The Denver Post that Gorsuch would be Scalia's "intellectual equal and almost certainly his equal on conservative jurisprudential approaches to criminal justice and social justice issues that are bound to keep coming up in the country."

1. Unlike current Supreme Court justices, Hardiman did not have an Ivy League education. He attended public high school in Waldham, Mass. He then attended two Catholic schools — Notre Dame University and Georgetown University's law school. He married his wife, Lori Zappala, in a Pittsburgh-area Catholic church.

2. In death penalty cases, Hardiman has a somewhat mixed record. He was part of a panel of federal judges who upheld Delaware's lethal injection protocol. In other cases, he has generally sided with the state over the inmates.

3. Hardiman has not ruled on any major abortion cases. But he once ruled to vacate (erase, in a legal sense) the conviction of an anti-abortion protester for blocking a Philadelphia public sidewalk near the Liberty Bell, agreeing with a panel of judges that the protester was exercising free speech.

4. There is a lot for Trump's conservative religious base to like. In religious freedom cases brought by inmates against prisons, Hardiman has generally ruled against the inmates. But in a case where an evangelical family complained that its religious liberty was hindered when the family's kindergarten-age child was prevented from reading from the Bible during show-and-tell, Hardiman ruled in favor of the family. And in a case where a child was prevented by public school officials from handing out invitations to a party at her church, Hardiman sided against the school district.

5. Some say Hardiman may be less like Scalia and more like another Catholic on the court. "Trump promised throughout the campaign to fill the vacancy with a judge in the mold of Scalia," according to Business Insider. But Hardiman's colleagues told the magazine he would "likely fall somewhere between Justice Samuel Alito and Chief Justice John Roberts ideologically."

A version of this story appeared in the Feb 10-23, 2017 print issue under the headline: 5 faith facts on Trump's Supreme Court pick, Neil Gorsuch.