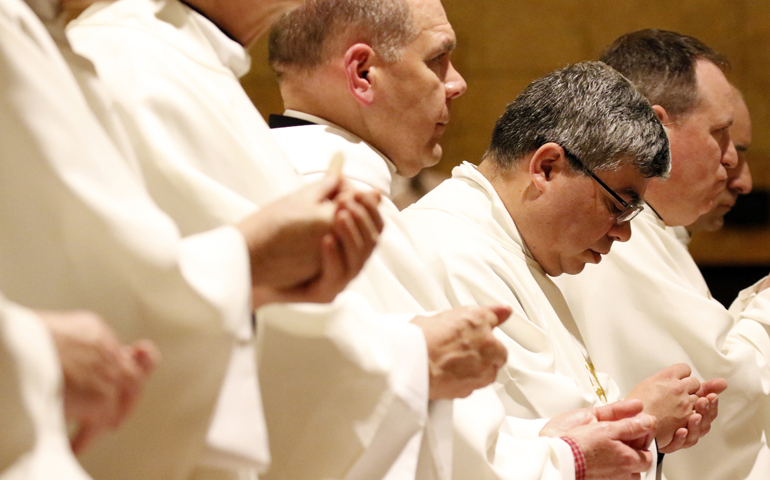 Priests hold the Eucharist during a Mass of Hope and Healing for victims of sex abuse April 26 at St. Anselm Church in Brooklyn, N.Y. (CNS/Gregory A. Shemitz)

NCR's editorial, "On Abuse: church has changed but not enough," rightly identifies the all-male clerical culture as a critical factor in the sex abuse scandal, but it fails to point to the failure of Pope Francis to change parts of canon law that embody that culture.

Pope Francis may feel restrained by theology from having women priests. But Canons 478 and 1420 require vicars general, episcopal and judicial vicars also to be priests. They therefore can't be women except with a dispensation given by the men in Rome. This can be changed with the stroke of a pen.

A more serious example of clericalism is canon law's imposition of the pontifical secret on all allegations and information about child sexual abuse by clerics. The only exception that would allow reporting to the civil authorities was given to the United States in 2002 and to the rest of the world in 2010, and it was limited to where there are applicable civil reporting laws. Very few jurisdictions have comprehensive reporting laws. In the United States, only half the states have clergy as mandatory reporters.

Pope Francis' attempts to hold bishops accountable have meant very little because his capacity to do so is limited by the Code of Canon Law. The three bishops he forced to resign — Archbishop John Nienstedt and his auxiliary, Bishop Lee Piché, of St. Paul-Minneapolis, and Bishop Robert Finn of Kansas City-St. Joseph, Missouri — had breached canon law in force in the United States since 2002 that required them to comply with civil reporting laws.

Bishops who live in jurisdictions without reporting laws comply with canon law by not reporting.

Since 1996, the Irish, British, Australian and United States bishops have wanted mandatory reporting under canon law irrespective of reporting requirements under civil law. The Holy See has consistently rejected the requests.

In 2012, the Australian Catholic Bishops' Conference sent to the Vatican for approval its sexual abuse protocol, Towards Healing 2010. It required mandatory reporting in all cases. On Feb. 22, 2013, the Congregation for the Doctrine of the Faith informed the conference that such mandatory reporting could apply to everyone else in the church but not to clerics.

In 2014, the Italian Catholic Bishops' Conference (of which Francis is the senior bishop, while not its president) announced that Italian bishops would not be reporting allegations of clergy sexual abuse to the police because Italian law did not require it — a position consistent with canon law. In 2015, the Polish Catholic Bishops' Conference made the same announcement.

In 2014, two United Nations committees, on the rights of the child and against torture, requested Francis to abolish the pontifical secret to allow reporting of child sexual abuse in all cases and to make it mandatory under canon law. This was no more than a request for the church to return to its centuries-old practice that existed before 1917. In September 2014, Francis refused, with the extraordinary excuse that mandatory reporting under canon law would interfere with the sovereignty of independent states. Canon law interferes with such sovereignty as much as the rules of golf.

On Feb. 15, 2016, Cardinal Sean O'Malley of Boston, the president of the Pontifical Commission for the Protection of Minors, stated that bishops have an ethical and moral obligation to report all allegations of clergy sexual abuse to the civil authorities irrespective of whether there were civil reporting laws. This was a welcome indication that canon law was about to change. On Dec. 6, 2016, the commission published its guidelines for national bishops' conferences. O'Malley's statement was not included.

Francis has repeatedly claimed that he and his predecessor, Pope Benedict, have adopted a "zero tolerance" policy towards child sexual abuse. In the professional context, zero tolerance means permanent dismissal. Yet the figures the pope produced to the United Nations in 2014 showed that less than one quarter of all priests who had sexually abused children had been dismissed. That's 75 percent tolerance, not zero.

In 2017, Archbishop Mark Coleridge of Brisbane told the Australian Royal Commission into Institutional Responses to Child Sexual Abuse that the Vatican had only agreed to dismiss one of six of his priests convicted of child sexual offences. That's 83 percent tolerance.

Francis' performance can best be expressed by Marie Collins when she resigned from the Pontifical Commission for the Protection of Minors March 1.

"When I accepted my appointment to the Commission in 2014, I said publicly that if I found what was happening behind closed doors was in conflict with what was being said in public I would not remain. This point has come. I feel I have no choice but to resign if I am to retain my integrity."