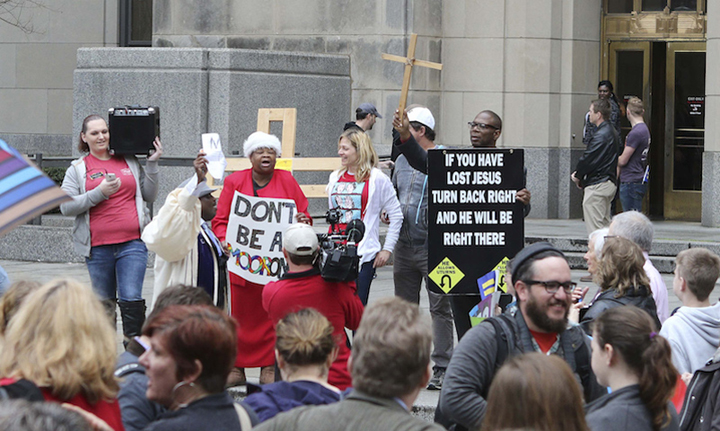 Supporters and opponents of same-sex marriage hold signs on the steps of Jefferson County Courthouse in Birmingham, Ala., on Feb. 9, 2015. (Reuters/Marvin Gentry)

Alabama’s probate courts may not issue marriage licenses to same-sex couples, the chief justice of the Alabama Supreme Court has ordered.

Chief Justice Roy Moore ruled Jan. 6 that Alabama’s Marriage Protection Act, which bars such unions, remains “in full force and effect” despite a June ruling by the U.S. Supreme Court that struck down similar laws banning same-sex marriage in Kentucky, Michigan, Ohio and Tennessee, according to USA Today.

This is not Moore’s first attempt to blur church-state boundaries. He was Alabama’s chief justice in 2003, when a state judicial panel removed him because he refused to obey a federal judge’s order to remove a 5,200-pound granite Ten Commandments monument from the lobby of the Alabama Judicial Building. But he was re-elected to the post in 2012.

In the same-sex marriage showdown, Moore does not have the authority to override higher courts, Scott McCoy, a senior staff attorney for the Southern Poverty Law Center, told Reuters news service.

But Christian supporters were vocal about supporting the chief justice:

Breaking News: In Alabama, Roy Moore continues to stand up for traditional marriage and the rule of law in that… https://t.co/Jms8h5mVcU — Pastoredsmith (@pastoredsmith) January 6, 2016