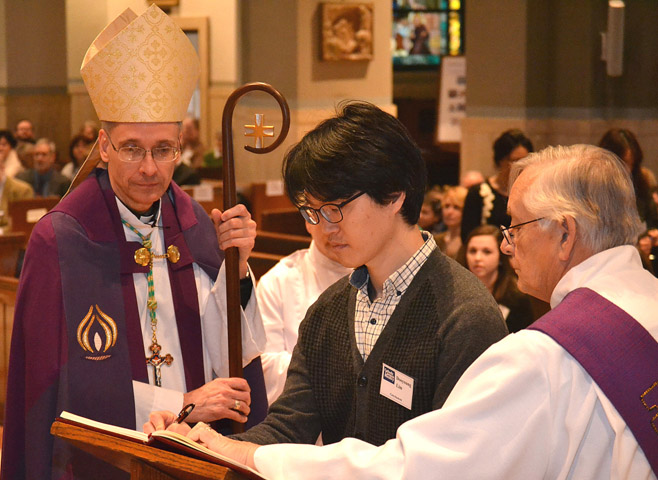 Bishop Mark L. Bartchak of Altoona-Johnstown, Pa., looks on as catechumen Dooyoung Lim signs his book of elect Feb. 22 at the Cathedral of the Blessed Sacrament in Altoona-Johnstown. (CNSMsgr. Tim Stein, Catholic Register)

Following the release of a scathing grand jury report Tuesday, the bishop of Altoona-Johnstown, Pa., pledged to publish a list of credibly accused priests as part of “a significant commitment to transparency, past and future.”

Bishop Mark Bartchak made the announcement Thursday afternoon at a press conference, where he began by offering “my heartfelt and sincere apology” to victims of clergy sexual abuse, in addition to their families, the people and priests of the diocese, and the public.

The press conference was prompted by a statewide grand jury report released Tuesday by Pennsylvania Attorney General Kathleen Kane. The report found hundreds of children were sexually abused by at least 50 priests and religious leaders in the south-central Pennsylvania diocese over decades, with the earliest referenced incident occurring in 1940.

Despite the litany of allegations, Kane said the cases could not face charges because many of the accused are dead, some of the alleged victims are reluctant to testify and statutes of limitations have expired. She stressed the investigation, which began in April 2014, is ongoing. The grand jury recommended the state statute of limitations for sexual offenses against minors be dropped, as well as a window opened for the filing of civil charges. It also recommended victims report accusations directly to law enforcement.

Bartchak said he took the recommendations seriously, and pledged to do more to protect children. He added that his prior experiences meeting with survivors of clergy sexual abuse “deeply affected me.”

Going forward, Bartchak said diocesan efforts to keep children safe will include publishing on the diocesan website a list of all priests with credible allegations against them, in addition to their current status. He did not specify when the list would be available.

The bishop also said he would begin a full review of diocesan policies and procedures on child protection, including its background check process, diocesan review board and reporting requirements. The diocese will also continue to report in writing all allegations to law enforcement, “of any type of sexual misconduct involving a minor by any clergy or religious (living or deceased), regardless of when the conduct occurred, whether or not the victim is now a minor and whether or not the victim or another person already has made the report.”

Bartchak added he would have pastors share the message at weekend Masses, and the diocese will hold “Prayer Services for Mercy” in coming weeks.

“I ask that we turn to our Lord for comfort and healing from these wounds as we pray for those who have been harmed, for all who have been affected, and for the many priests in our Diocese who have been faithful to their vocation and to the people they serve,” he said.

In its report, the grand jury made a point to separate Bartchak, head of the Altoona-Johnstown diocese since 2011, from his predecessors and acknowledged the cooperation of the diocese in their investigation, including the suspension of several priests from ministry.

On Wednesday, one of the priests named in the grand jury report, Msgr. Joseph Maurizio Jr., was sentenced to nearly 17 years in prison in connection to his September conviction of sexual assault of three Honduran boys, money laundering and possession of child pornography, The Associated Press reported.

The grand jury said Maurizio was alleged to have engaged in "unlawful sexual activities" with children at an orphanage while on mission trips in Honduras from 1999 to 2009. The grand jury said a report was made to the diocese in 2009, with the diocese hiring a translator to interpret the victims’ claims. According to documents obtained by the grand jury, the diocese ultimately concluded the alleged conduct was “impossible.”

In a rather rare commenting on events in a specific diocese, the chair of the U.S. bishops’ Committee on the Protection of Children and Young People called the grand jury report’s contents “heart wrenching and shocking.”

“Like everyone, I read the news with great pain,” said Juneau, Alaska, Bishop Edward Burns in a statement Thursday.

“Once again, the wounds inflicted through these heinous crimes have caused great pain and further mistrust in the Church. We must never lose sight of the fact that every victim/survivor has personally experienced profound injury, suffering, and betrayal,” he said.

The grand jury report -- along with the film “Spotlight” earning Best Motion Picture honors at the Oscars -- served as “painful, but important, reminders that we must remain vigilant in our efforts to protect children from the scourge of abuse," he said.

Burns said the moments highlight the need to enact the bishops’ Charter for the Protection of Children and Young People -- and in doing so, to cooperate with law enforcement, permanently remove offending priests from ministry, and create safe environments for children -- and to not grow complacent.

“Only with vigilance can we ensure that children are kept safe and so allow the Church to help our people in a process of healing and address the mistrust that rises from these cases,” the Alaskan bishop said.

[Brian Roewe is an NCR staff reporter. His email address is broewe@ncronline.org. Follow him on Twitter: @BrianRoewe.]