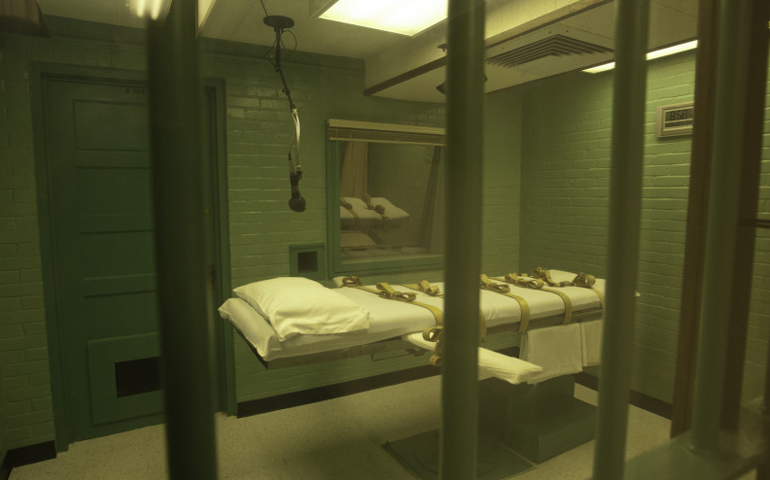 Death chamber at the Texas State Penitentiary in Huntsville where capital convicts are executed by lethal injection. (RNS/Photo courtesy of Texas Department of Criminal Justice)

Ohio is responsible for many firsts in regards to the death penalty: it was the first state to suggest using the drug midazolam for execution and the first to attempt using a single lethal injection drug protocol.

New to that list is the first state to have a ruling upheld in circuit courts against midazolam, according to Robert Dunham, the executive director of the Death Penalty Information Center.

On April 6, the U.S. Court of Appeals for the 6th Circuit upheld a previous preliminary injunction, barring the usage of midazolam in Ohio's lethal injection drug protocol. The case was filed by three death row inmates who were previously scheduled for execution. The injunction provides a temporary stay of execution until the case is overturned or another drug protocol is found.

The decision follows a previous preliminary injunction from Magistrate Judge Michael Merz of the U.S. District Court for the Southern District of Ohio Jan. 26. That ruling followed a five-day evidentiary hearing in which experts spoke on the constitutionality of midazolam — a drug most frequently used for sedation. The inmates argued that the drug violated their Eighth Amendment right against cruel and unusual punishment. The Ohio courts agreed.

In the 6th Circuit's 2-1 ruling on April 6, Circuit Judge Karen Nelson Moore, joined by Circuit Judge Jane Branstetter Stranch, wrote in her opinion that the inmates claim that likelihood that midazolam violated the inmates' Eighth Amendment right was "likely to succeed."

The opinion looked at the conclusions drawn during the evidentiary hearing in January. One expert witness for the plaintiffs, Craig Stevens, a professor of pharmacology at Oklahoma State University, concluded that the use of a midazolam as the first drug in a three-drug protocol "is highly likely to cause intolerable pain and suffering," as it would not mask the effects from the second and third drugs.

According to Deborah Denno, a professor at Fordham University's law school who specializes in capital punishment issues, midazolam was originally Ohio's "plan b" to a protocol that began with sodium thiopental. After sodium thiopental was discontinued by the pharmaceutical manufacturer due to its usage in executions, midazolam became the state's go-to.

"The fact that the state that first introduced this drug as a viable drug to use for lethal injection has now held, or at least a lower court judge has held it to be unconstitutional is quite a statement," Denno said.

Dunham agrees that the ruling is important, however he feels the importance lies in what he calls the "fullest evidentiary hearing" on midazolam.

"This [hearing] was the first one that proceeded without artificial time pressures from execution warrants so the court was able to take the time that was necessary to fully hear the evidence," Dunham said, citing other hearings in Alabama, Oklahoma, Virginia and the U.S. Supreme Court where they ruled in favor of the state.

Much of the defense in the Ohio case rested on the 2015 Supreme Court decision in Glossip v. Gross, where the court ruled that Oklahoma's use of midazolam did not violate death row inmate Richard Glossip's Eighth Amendment right.

Denno, Dunham and the Court of Appeals agree that the Ohio decision benefited from additional history and facts that the Supreme Court case did not have.

"There's nothing that the Ohio court did that is inconsistent with the United States Supreme Court precedent, there's no legal judgment it made inconsistent with what other courts have done, it's just the judgment was based on different findings of fact," Dunham said.

Included in the Ohio evidentiary hearing was testimony surrounding the executions of Christopher Brooks and Ronald Smith, both from Alabama.

The most recent court opinion found that Brooks' "heaving" and Smith's "heaving, coughing, and flailing" during the execution "were attributable to midazolam's inability to prevent the pain caused by paralytic drugs and potassium chloride, rather than to other circumstances."

Ohio has a record of problematic executions. The ruling comes three years after the execution of Dennis McGuire, which involved midazolam. McGuire was the first inmate in the state to be executed with the state's then-new drug protocol of midazolam and hydromorphone.

Witnesses from McGuire's execution testified during the evidentiary hearing prior to Merz's ruling about the unusual events during his execution.

"I saw the stomach first. I saw what looked like a knot in his stomach ... and his stomach was moving. I had not seen that before," said Gary Mohr, director of the Ohio Department of Rehabilitation and Correction.

Alan Johnson, a reporter for The Columbus Dispatch also testified that McGuire "began coughing, gasping, choking in a way that I had not seen before at any execution. And I remember it because I relived it several times. Frankly, that went on for 12 to 13 minutes."

Ohio is also the only state with an inmate who survived a lethal injection execution. The Department of Corrections attempted to execute Romell Broom back in 2009. He is still waiting on death row.

Denno, who notes that the state has already filed an appeal to the court's opinion, says it's difficult to predict what the ruling will mean for the state's injection drug protocol. She did say that typically states will find a different drug rather than spend their time and resources on trials. Arizona and Florida have already abandoned the drug.

It's also unclear what implications this ruling may have on other states and courts — namely for eight inmates in Arkansas. Eight inmates from Arkansas were scheduled to be executed in a 10-day period starting April 17. One inmate, Jason McGehee, was granted a stay of execution April 6.

On April 17 — the day Bruce Ward and Don Davis were to be executed — the Arkansas Supreme Court issued stays of execution for them. The state then asked the U.S. Supreme Court to step in, hoping that a ruling would allow the executions to continue. Right before midnight, when the signed death warrants would expire, the Supreme Court refused to step in and lift the stays.

As of April 18, there are still five more executions scheduled. There have been several suits filed on behalf of the inmates. Part of the argument presented by the lawyers is based on the constitutionality of midazolam.

"The difficulty in Arkansas is that like the proceedings in Oklahoma and in Virginia and Alabama, they're taking place under death warrant so there's an artificially pressed time period," Dunham said.

Karen Clifton of Catholics Mobilizing Network told NCR in a statement that "particularly in regards to the scheduled executions in Arkansas, where the state's supply of midazolam is serving as impetus for 7 executions in 10 days, this ruling provides further objection to the use of the death penalty."

The U.S. Supreme Court is scheduled to hold a conference April 21 about a re-hearing petition from the inmates. Denno is unsure how much the Ohio decision will play into the court's decision, especially since Ohio is "not going along with their holding, basically."

The ruling does not bar further executions in Ohio but does mean the state may have to go back to the drawing board to find a new lethal injection protocol, as state's choices and supplies dwindle.

Ultimately, Clifton feels the ruling called into question "lethal injection as a humane way to carry out an execution."

"After this decision, we are once again faced with the question of the morality of the death penalty in this country. As Pope Francis has said, there is 'no humane way to kill another person.' This ruling provides one more reason why the death penalty is a failed system that denies the dignity due to every human person," Clifton said in her statement.

Dunham agrees, stating that this could be another step in removing midazolam as an execution drug.

"The difficulties states have are that the pharmaceutical manufactures don't want their medicines used in executions," he said. "So states have been looking for non-anesthetics to perform an anesthetic function and that simply doesn't work. That suggests that whatever happens from this point forward in the three drug protocol is going to be inappropriate. At a minimum, it's going to be human experimentation."