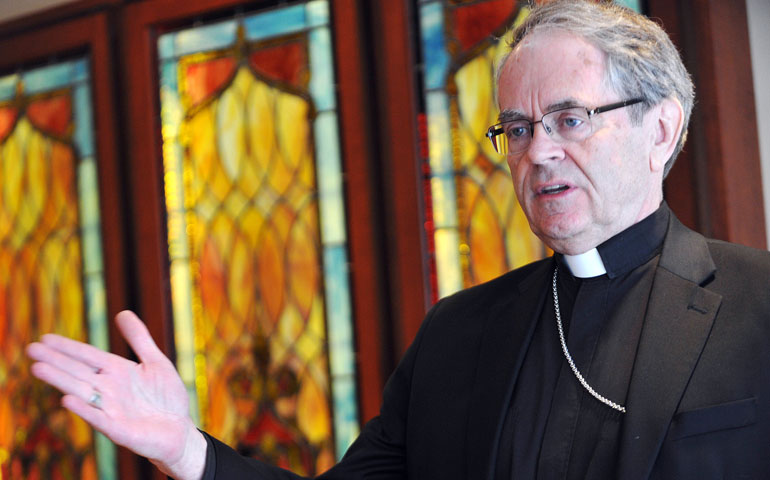 Bishop George Thomas admits that when his already struggling diocese in Helena, Mont., was hit with 30 lawsuits because of decades-old sexual abuse by priests, his instincts were to fight.

But that defensive posture fell away after he visited a victim's home for a family dinner, he said.

"I realized how soul-searing this has been for him," said Thomas, who has worked in community mental health. "While the abuse was decades ago, the suffering is in the present."

Eventually, the diocese faced 362 claims of sexual abuse and filed for bankruptcy, like a dozen other American dioceses have done. Unlike many of the others, Helena took "the road less traveled," as Thomas put it.

"We chose mediation and conciliation over acrimony and litigation," Thomas said. "Every day, I am affirmed that this was the best way to go."

The approach stands in stark contrast to that taken by the Milwaukee archdiocese, a much larger diocese.

While the Helena bankruptcy was filed, settled and approved in 13 months after only three hours in court, the Milwaukee case took nearly five years to resolve and scores of hearings, many bringing more than a dozen lawyers to court.

Helena spent about $2.5 million on lawyers and services related to settling the bankruptcy, not including a sum paid by its insurers. November 2015 court filings showed Milwaukee's legal fees at $20 million and still rising, despite a successful mediation in August that led to court approval of the bankruptcy settlement in November.

Helena and Milwaukee each established $21 million funds to compensate the victims.

Helena did not challenge the validity of any of the 362 claims, saying that an independent administrator would assess and determine how much each would receive. The final settlement plan was approved by 98 percent of the victims and all of the diocese's other creditors.

Milwaukee challenged each of the more than 575 claims on legal grounds and a number were dismissed after court hearings. In the end, 120 will receive $2,000 each and 336 will share the remainder, a varied amount to be determined by a court-approved mediator.

Thomas said that "while a small number of claims appeared bogus because the facts did not add up," all were put in the hands of a retired federal judge who determined how much compensation each would be awarded. Thomas said he doesn't know how much individual victims will receive or if the judge rejects any.

"We'll probably never know," he said. "From the beginning, I have said to the victims, 'We believe you and respect you.' "

Milwaukee Archbishop Jerome Listecki, a civil and church lawyer by training, declined to be interviewed for this story. In court, his lawyers have said they do not doubt the veracity of the claims of abuse, but to the end challenged the legal standing of each of the 575 claims.

The Helena diocese was in a fragile financial position when Thomas arrived in 2004. Settlements already had been made to resolve a number of abuse claims. Other financial woes had taken a toll -- a devastating illness by a priest had accrued huge medical bills for the self-insured diocese; a parish had failed to pay for health care premiums for its employees and owed almost $1 million; and the blessing of having more than a dozen seminarians was costing about a half million a year.

Thomas brought together a blue-ribbon committee of financial experts in the community to set the financial ship on a steady course.

Milwaukee was also in a precarious position when Listecki decided to file for bankruptcy. Over two decades, the archdiocese had already spent more than $29 million in mediated settlements with 190 victims, but the new claims presented far graver dangers.

Listecki instructed his lawyers to file for bankruptcy in January 2011, the first anniversary of his investiture as the spiritual leader of Milwaukee's Catholics.

Like Thomas, Listecki faced two dozen lawsuits involving victims of clergy sex abuse. A mediated offer of $4.6 million had been rejected by lawyers representing the 23 victims in state court in late 2010.

When he filed for bankruptcy a few months later, Listecki said it was the only way to treat all equitably and "to move forward on stable financial ground, focused on its Gospel message."

Lawyers representing the victims in state court accused the archdiocese of filing for bankruptcy to avoid trials on the issues, a procedure that would have forced top officials to testify in court. Listecki denied the claim, saying that lawyers for the other side were unwilling to negotiate.

A pair of Wisconsin court rulings made in the mid-1990s essentially gave immunity to the church in lawsuits brought by victims who claimed that the archdiocese failed to supervise its priests and therefore was legally responsible for the abuse.

Over the next decade, lawsuits brought by many victims were dropped. In one of those cases, the archdiocese obtained a judgment for its legal fees against a victim of one of its most prolific pedophiles.

In 2007, the Wisconsin Supreme Court removed some of the protection in a ruling that said victims could sue if they could show that archdiocesan or parish officials were aware of a priest's sexual abuse. In subsequent rulings, other lower courts ruled that the church's insurance policies would not have to pay because the policies did not cover intentional acts.

In Montana, the diocese brought in representatives of the community, including prosecutors, law enforcement officers, and those who counsel victims, to come up with procedures and policies.

Michael Patterson, a lawyer for the Helena diocese, said it was important to acknowledge the history of the abuse.

"Transparency was hugely important," he said. "We opened the books and showed them exactly what resources we had. We disclosed the names of all those involved in abuse and didn't try to sugarcoat it."

Patterson said lawyers for the victims challenged an insurance issue and a judge ruled against them, a move that was costly. "In my estimation, they would have gotten almost double what they got," he said.

Other dioceses and lawyers representing victims in bankruptcy should consider the Helena approach, Patterson said. "You must realize what you are dealing with and the ramifications of a scorched-earth approach. Victims will get less money, the bankruptcy will be protracted, and a very high percentage of the proceeds will go to lawyers."

James Stang, a Los Angeles lawyer who has represented claimants in 11 church bankruptcies, including those of Milwaukee and Helena, said the lack of consultation on the part of the Milwaukee Archdiocese was almost unheard of in bankruptcy cases.

"We did not get the courtesy of a phone [call] from the diocese that it was about to be filed," Stang said. "We learned about it the same way the survivors and their families learned of it -- from media reports."

Lawyers for the archdiocese said that they solicited input on portions of the reorganization plan, but that Stang would not cooperate without being privy to the full document.

In Helena, Thomas received praise from lawyers on the other side and from the judge who handled the case. Thomas said the relatively swift resolution has resulted in high priest morale and increased support by people in the community.

"We have been purified by this process and I think we have been strengthened," the bishop said. "We are financially poorer but morally and spiritually we are very strong."

Prolonging the bankruptcy would have meant that "only the pockets of attorneys get lined," said Thomas, adding that while the Milwaukee case has gotten far more publicity, he has received calls from bishops around the country asking about his approach.

"They are pleased with the approach. They see this as a different modus operandi available to them," Thomas said.

"My advice to them is to take the road less traveled."

A version of this story appeared in the Feb 12-25, 2016 print issue under the headline: In bankruptcy dealings, Helena diocese sets alternate example.