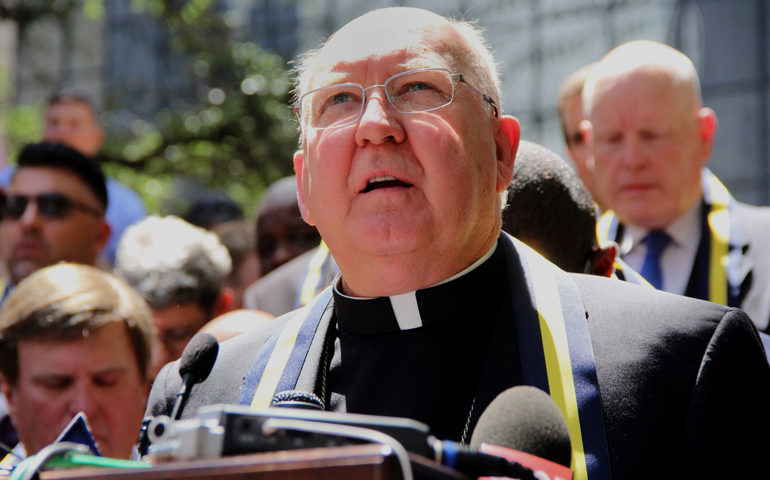 The importance of the vocation of marriage and the family is at the core for the future of not only the Catholic Church, but of society, Bishop Kevin J. Farrell of Dallas said at a news conference Aug. 17.

Earlier in the day the Vatican announced that Pope Francis has appointed the bishop to lead a new Vatican office for the laity, family and life. Creation of the office is a continuation of the pontiff's quest to overhaul the Curia for more efficiency and transparency and to highlight the growing and important role of the laity among the world's 1.2 billion Catholics.

At the news conference and in a letter to priests of the diocese and the pastoral center staff, Bishop Farrell thanked the pope for having confidence in him to lead the new office, but said he also welcomed the appointment with mixed emotions.

"Dallas has been my home for 10 years and, from the beginning, I quickly grew to love the beautiful people and the culture here," he said in the letter. "The strong faith, kindness and generosity of the people in the Diocese of Dallas surpassed all of my expectations.

"A bishop can get nothing of significance done in a diocese without the hard work and cooperation of pastors, priests, his senior staff and diocesan employees," he said. "Together, I believe we have accomplished many goals and put others in motion that have improved and enhanced service and ministry to the good people we serve."

Farrell became the seventh bishop of the Dallas diocese when he was appointed March 6, 2007, by Pope Benedict XVI and was installed at the Cathedral Shrine of the Virgin of Guadalupe in downtown Dallas May 1, 2007.

When he became the chief shepherd of the diocese, there were approximately 947,000 Catholics, compared to the current 1.3 million, thanks in part to the arrival of immigrants from across the United States and abroad.

Statutes for the new office, published in June, said it was being established "for the promotion of the life and apostolate of the lay faithful, for the pastoral care of the family and its mission according to God's plan and for the protection and support of human life."

Bishop Farrell was scheduled to travel to Rome in the coming days to open the office and meet with his new staff, which will include a secretary and three lay undersecretaries.

He will celebrate his 69th birthday Sept. 2. He will return to Dallas for a few days in September before relocating permanently to Rome a few weeks later.

Upon Farrell's departure, Auxiliary Bishop Gregory Kelly will lead the diocese until Pope Francis appoints a successor in the coming months.

During his tenure in Dallas, Farrell has been outspoken on abortion and the death penalty as well as on gun control, immigration and religious liberty. This year, during the Year of Mercy, he has spoken about love, mercy and charity.

At the news conference, as part of the life issue, he reiterated that the Texas bishops have sent Texas Gov. Greg Abbott a letter requesting clemency for Jeff Wood, who was scheduled for execution Aug. 24 for his capital murder conviction in the shooting death of a store clerk in Kerrville in 1996.

Wood, who was not in the store at the time of the shooting and claimed he did not know a passenger in his truck was going to rob and kill the attendant, also is said to have an IQ of about 80, which supporters said should have disqualified him from standing trial, based on his mental competency.

"We have sympathy for the family of the victims," Farrell told reporters, "but killing someone doesn't solve the problem, especially when that person was not even there."

He also addressed the acrimony brought on by violence, saying that people must understand commonalities beyond their differences.

"We need to build bridges, not walls," he said.

In Rome, Bishop Farrell will join his brother, Bishop Brian Farrell, who is secretary of the Pontifical Council for Promoting Christian Unity.

When asked at the news conference if maybe his brother had put in a good word for him with the pope, Farrell said, "I doubt it."

It will be the first time the two brothers have ministered in the same city.

[Sedeno is executive editor of The Texas Catholic and Revista Catolica, publications of the Dallas diocese.]