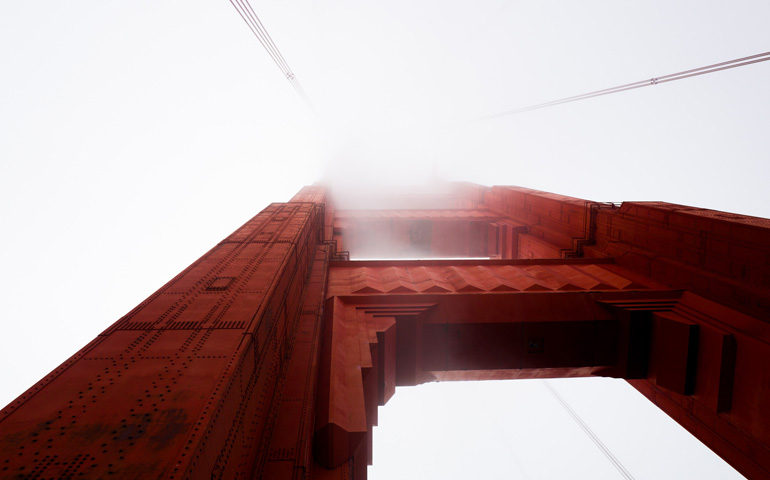 BUILDING A BRIDGE: HOW THE CATHOLIC CHURCH AND THE LGBT COMMUNITY CAN ENTER INTO A RELATIONSHIP OF RESPECT, COMPASSION, AND SENSITIVITY
By James Martin
Published by HarperOne, 160 pages, $19.99

At first blush, Jesuit Fr. James Martin's latest publication, Building a Bridge, looks like a storybook. If a book can be judged by its cover, the nicely-bound hardback's brevity, compact size and magnified font certainly gives its desired impression of accessibility and welcome. Unfortunately, for some Catholics, particularly longtime LGBT activists, certain sections may also read like fiction.

It was a real-life horror story that galvanized Martin to write this manuscript. Just weeks after the massacre of 49 people at Pulse, a gay nightclub in Orlando, he was offered the Bridge Building award from New Ways Ministry, a longtime Catholic advocacy and ministry organization for LGBT Catholics and their families. Building a Bridge is an expansion of his acceptance speech.

The heart of the book is its 72-page reflection on the catechism’s teaching that gays and lesbians should be treated with "respect, compassion, and sensitivity." Martin expands on the teaching to include transgender people. He urges church leaders to act on this doctrine, but, in an interesting twist, also exhorts members of the LGBT community to treat the hierarchy with the same respect, compassion and sensitivity.

Part of what motivated Martin to accept the Bridge Building Award was the inadequate response offered by Catholic bishops to the Pulse tragedy. "Although many church leaders expressed both horror and sorrow, only a handful of the more than 250 Catholic bishops used the words gay or LGBT," Martin writes. "I found this revelatory."

That Martin found the bishops' silence revelatory may say more about the excessiveness of Martin's optimism than it does the limitations of the bishops' pastoral capacities. After all, these church leaders were reared on the Congregation for the Doctrine of the Faith’s 1986 "Letter to the Bishops of the Catholic Church on the Pastoral Care of Homosexual Persons," which instructed them to not "be surprised" when advances in gay rights led to increased anti-gay violence:

[W]hen homosexual activity is consequently condoned, or when civil legislation is introduced to protect behavior to which no one has any conceivable right, neither the Church nor society at large should be surprised when other distorted notions and practices gain ground, and irrational and violent reactions increase.

Martin is hardly the first Catholic, nor the first Jesuit, to write about the LGBT experience in the church. But he may be the first to write about the topic from such a privileged position inside the institutional church. "In my life as a Jesuit, I have met many cardinals, archbishops, and bishops," Martin writes. "Quite a few I consider friends. All the ones I've met are kind, hardworking, and prayerful men, many of whom have been very kind to me personally."

His remarkable access to church leaders prompts him to make one of the boldest claims in the book:

Many in the institutional church want to reach out to [the LGBT] community, but seem somewhat confused about how to do so. Yes, I know it seems that there are some who don't seem to want to reach out, but all the bishops I know are sincere in their desire for true pastoral outreach.

There are a lot of "seems" in those two sentences, and they seem to suggest that LGBT Catholics, in their lack of access to the power center of the church, are simply ignorant of what's really going on in the hearts of these men.

Martin's claim strains under the weight of evidence to the contrary. The United States Conference of Catholic Bishops has reaffirmed as its top priority for 2017-2020 the defense of traditional marriage and the defense of religious freedom. Both of those well-oiled, politically charged campaigns seek to deny LGBT individuals and couples rights to benefits, adoptions and workplace protections. Catholic high schools continue to fire LGBT teachers because bishops threaten to remove the school's canonical status if they don't.

In February of this year, many bishops gathered at the National Catholic Bioethics Center Conference to discuss the problem of "transgenderism" and strategies to counter its growing influence.

Most recently, Bishop Thomas Paprocki of the Diocese of Springfield, Illinois, who famously held an exorcism in November 2013 after marriage equality was legalized in Illinois, issued a directive denying all Catholics in same-sex marriages access to the Eucharist, participation in liturgies, and even Christian burial.

Of course, these bishops may not be friends of Martin. But in the face of these injustices, most of those other bishops remain silent, and their silence sounds a lot more like collusion than it does confusion. Even if a bishop is sympathetic to LGBT concerns, very often his superiors and largest benefactors are not, and LGBT people are simply not worth the risk of speaking out.

There is, of course, a deeper and more personal risk at stake for many bishops and priests when faced with LGBT issues. That is, many of them are gay. Martin does his best to acknowledge this reality, but gets caught in a Catch-22.

"There are hundreds, perhaps thousands, of holy and hardworking gay clergy, and gay and lesbian members of religious orders, who live out their promises of celibacy and vows of chastity and help to build up the church," Martin writes. Yet, just pages later, he claims that "one reason the institutional church has struggled with sensitivity is that … many church leaders still do not know many gay and lesbian people."

Perhaps sensing the furrowed brows of his readers, Martin then admits, "The temptation is to smile and say that church leaders do know people who are gay: priests and bishops who are not public about their homosexuality. But my point is a larger one. Many church leaders do not know on a personal level, LGBT people who are public about their sexuality."

Is the answer, then, for the clergy to come out? Martin does not say. But he does call LGBT Catholics to greater compassion for their clerical leaders, whom, he says, "might be homosexual men who at a younger age were tortured by the same hateful attitudes that most LGBT people experienced growing up."

Citing a quote from Irish writer Colm Toíbín, Martin suggests that some priests entered the seminary because the prospect of "making a vow in holiness to never have sex with a woman offered you relief." (Ironically, in trying to excuse the internalized homophobia of some priests, Martin may have inadvertently revealed one of the root causes of systemic misogyny among the clergy.)

Martin should be applauded for speaking so forthrightly about the prevalence of gay men among the clergy, but he doesn’t really reckon with the fact that it is precisely the clerical closet that makes the hierarchy's oppression of LGBT people so outrageous and intolerable. So many bishops and priests lie about their own sexualities; some even carry on same-sex relationships while sitting in judgment over LGBT people who are trying to live their lives honestly.

LGBT Catholics have been forced to bear with a stunning lack of transparency and truth on the part of their religious leaders, and yet, Martin believes that they should work to earn the clergy's trust. He writes, "If you sincerely want to influence the church's perspective on LGBT matters, it helps to earn the trust of the members of the hierarchy. One way to do that is by respecting them."

Recognizing that "in the institutional church, it is the hierarchy that operates from a position of power," Martin says that "LGBT Catholics are called to treat those in power with respect, compassion, and sensitivity" because "those virtues express Christian love." This might be possible if bishops and priests were truly naive about gay life and same-sex love, but the fact that so many of them know these realities so intimately makes their unjust actions not only hypocritical but an abuse of power.

Martin asks the LGBT community to give bishops "the gift of time — time to know each other." But the movement to seek justice for LGBT people in the Catholic Church is nearly as old as the 1969 Stonewall riots. In that time, thousands of LGBT Catholics and their families have held vigils, witnessed outside cathedrals, and written thousands of letters, respectfully and in good faith, to bishops pleading for dialogue. Some of those letters received a dismissive response; many simply went unanswered.

More than 40 years of struggle should have taught us by now that compassion, respect and sensitivity are not enough to bring about a truly just relationship between bishops and LGBT Catholics. Even with these three virtues in play, bishops still have the power to judge and negatively impact the lives of LGBT Catholics, while operating in secrecy and lying about their own sexualities. And LGBT Catholics are expected to bare their souls to their religious leaders and beg to be heard, while also, ultimately, remaining voiceless and officially condemned by their church.

In Martin's conclusion, he envisions a bridge that one day will be smooth enough to allow everyone to encounter one another easily. To trust in that bridge, he writes, "is also to trust that God desires reconciliation."

But for reconciliation to take place, it would require not simply compassion, respect and sensitivity, but a mutuality of vulnerability, self-disclosure, honesty and authenticity. Though it was probably not Martin's intention, Building a Bridge shines a spotlight on just how radical the lack of mutuality is between LGBT Catholics and the bishops. As long as that imbalance persists, it's hard to imagine how these roads can ever truly meet and how the bridge can possibly hold.