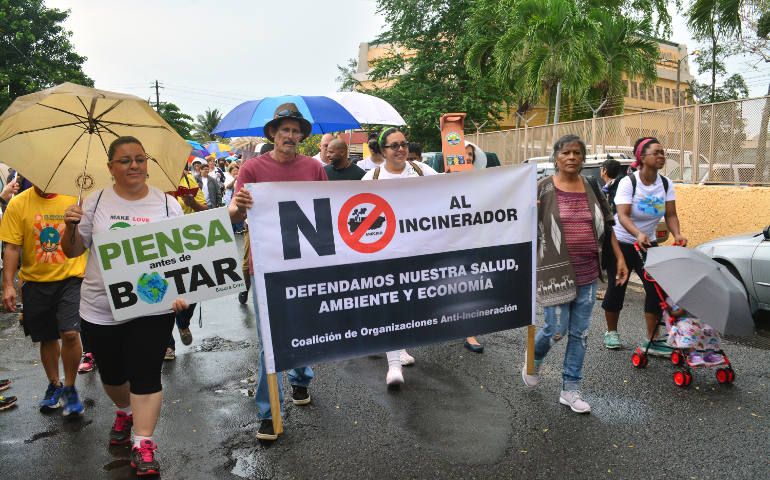 People carry banners during an April 30 march in Catano, Puerto Rico, to raise awareness about climate change. Members of several Catholic groups joined representatives of more than 30 organizations for the march to "raise awareness and call for immediate action" to preserve the environment and limit climate change. (CNS photo/Wallice J. de la Vega)

CATANO, Puerto Rico — Members of several Catholic groups joined representatives of more than 30 organizations for a march to "raise awareness and call to immediate action" to prepare for climate changes "that have started already" in this Caribbean island.

Despite light rain and a severe weather forecast, thousands of marchers gathered April 30 at Cosme Beitia Coliseum for prayer led by the Rev. Heriberto Rodriguez of the Puerto Rico Ecumenical and Interfaith Coalition before a 45-minute walk on a seaside road to Esperanza Park.

Many marchers told Catholic News Service that their participation was directly tied to Pope Francis' encouragement to protect the environment as expressed in his encyclical, "Laudato Si', on Care for Our Common Home."

"We are here to share this moment with all these people, following Francis' instructions about caring for the environment of our planet, which he says is everyone's home," Fr. Jaime Rodriguez Ricope of nearby Our Lady of Mount Carmel Parish, told Catholic News Service.

The march was coordinated by the Latino Link for Climate Action, known as ELAC, a movement of religious, artistic, community, academic and scientific groups headed by El Puente, an activist organization based in New York City. The event was produced in collaboration with the Puerto Rico Climate Change Council.

The Catholic church in Puerto Rico has been a strong voice within a wide group of organizations involved in environmental preservation and climate change education.

"To hear the maximum authority, so to speak, within the church speaking and placing the environment in everyone's mind, is a great contribution", said Dominican Sr. Lissette Aviles, delegate of Archbishop Robert Gonzalez Nieves of San Juan to ELAC.

In anticipation of Francis' encyclical a year ago, Nieves initiated an ecological ministry office. Its first program offered priests and parish administrators tips on how parishes can become environmentally sustainable.

Aviles stressed that ELAC was not strictly a Catholic effort, but "a task, a reflection, and a path formed from an ecumenical perspective."

"Faith-based people joining this process was practically imperative,” she said. "It's on us to take care of creation, not to see it as merely nature and ecology, but stewardship of creation."

In Puerto Rico, however, the environmental cause has taken a back seat to the wider roar sparked by the island's current financial turmoil. Nevertheless, the U.S. territory also faces climate-related challenges, both natural and man-made. Some environmental experts have called the set of challenges an "environmental time bomb."

Recent local headlines have called attention to the island's alarming shoreline erosion, which has been attributed to rising sea levels. Although the main cause of rising seas has been scientifically tied to the melting of the polar caps because of rising temperatures, a 1999 report by The Coastal Society warned Puerto Rico that "industrial sand removal operations (for construction projects) have permanently removed fragile sand dune ecosystems around the island." The report also said that the loss of more than three feet of sandy beach is common in many areas of the island.

And in recent news reports, University of Puerto Rico oceanographer Maritza Barreto said 16 feet of Puerto Rican beaches are being lost to the rising seas in recent years, something she said she had never seen after more than 20 years of research.

The latest environmental scandal to surface is related to coal ash pollution created by energy producer AES Puerto Rico on the southeast coast. The Investigative Journalism Center at the Interamerican University of Puerto Rico reported that when the company began production in 2002, its contract with the local public power company stipulated that all refuse from coal burning would not be disposed of in Puerto Rico.

An amendment to the contract was privately signed by both parties in July 2015, allowing AES to dump coal ash locally. The refuse continues to be discharged in 11 municipal landfills, open fields and rivers and is being used as housing, road and bridge construction foundation filler.

Although tests by scientists at Vanderbilt University in Tennessee and ARCADIS Labs in North Carolina have found the refuse contains heavy metals -- including chloride, chromium, lithium, selenium and thallium -- at levels that exceed 9,000 times federal safety standards, neither the U.S. Environmental Protection Agency nor the local Environmental Quality Board have qualified AES coal ash as harmful to humans.

Another project, a large garbage incinerator to be built about a mile from downtown Arecibo on the northern coast, remains technically alive despite legal struggles and wide opposition from neighbors and environmental groups.

Community resistance broke out in 2009, when Energy Answers International, based in Albany, N.Y., proposed a "waste to energy" contract to the Puerto Rico power utility. The government declared an "energy emergency," got a "fast track" 30-year agreement approved and issued construction permits.

As of Tuesday, the company has delayed construction because of legal issues about its environmental impact statement and water use from a nearby stream.

The local environmental march was planned as an extension of the signing by 175 countries of the historic Paris climate agreement at the United Nations April 22.