Bruno Daniel-Garcia, 24, first came to my attention during a benefit marking the 15th anniversary of the Dorothy Bennett Mercy Center. The Belle Harbor Yacht Club in Rockaway Park, a few blocks from the Atlantic Ocean, was 12 miles and a world away from the center and the Brooklyn neighborhood where this composed, handsome college graduate grew up with his parents and brother. 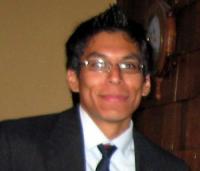 Daniel-Garcia was pleased to pay tribute to the center, which began as an after-school program for immigrants' children attending the nearby public school. It quickly morphed into a multi-purpose organization with many services for adults, including language help, computer training and parenting skills.

Sr. Camille: Bruno, what was it like for you to be a member of the first class to come to the center?

Daniel-Garcia: The program and its center were in their infancy and I was barely out of mine. I remember a hall gleaming with the sheen of linoleum flooring. I remember the dark windows of a quintessential New York City fall and winter, but most of all, I remember the warmth and welcome that have come to personify a small center with a big heart.

Can you recall other first impressions?

The center was in sharp contrast to the mismanaged, understaffed, chaotic environment of what was then Public School 157. It provided a refuge for me. It was someplace beyond the anxiety I had come to associate with school, somewhere I was secure.

Did the help received there affect your later academic pursuits?

It made me more comfortable in school. I received a scholarship to attend The Taft School in Connecticut. It's an excellent private boarding school. In addition to my free tuition, I was given a biweekly allowance of $50, enough for food and laundry. Taft, in turn, equipped me to enter Hunter College, from which I graduated in 2009.

Your parents must have been delighted that you had this opportunity.

Yes, they both were well-educated in Mexico and both taught electrical engineering. They would have remained there except for the poor air quality. Soon after I was born, that became a danger to me, so they came to this country.

Will you continue studying?

I'm in the process of applying to Baruch College for public policy administration. I've put the process on hold while I support the Occupy Wall Street movement. I spend most of my days there, but go home at night.

How do you do this without a salary?

I bicycle everywhere, so I don't even need a Metro card. I follow a simple lifestyle, but a good one.

Are you involved in any local community efforts?

Housing was always a big deal for me. I don't like the way people are ousted from their homes and neighborhoods. A year ago, my pastor, Fr. Steve Lynch, suggested I check out Churches United for Fair Housing. This grassroots organization helps local people have a say in community planning projects. Without such a structure, people are simply ignored, especially those who are disadvantaged or disempowered. We want to empower and mobilize and give them a way to express their concerns.

Your testimony at the anniversary celebration indicates a continuing connection with the DBMC. How did that come about?

After I graduated from college, I found myself somewhat lost. I was full of desire for change and had good intentions, but was woefully short of a plan to accomplish anything. And then the center stepped in to welcome me home again.

"It takes a village to raise a child." I remembered that those words were in a picture frame at the entrance of the center. Suddenly I knew that this was a place I wanted to support, to contribute to, to become part of. I interviewed with the center's founder, Mercy Sr. Kathleen Quinn. I told her I wanted to volunteer to do whatever I could to advance its mission. Without a moment's hesitation she accepted me into the close-knit group that makes possible what the center does on a daily basis.

What was your role there?

For the next two years, I worked with the after-school program. I did my best to make sure the center continued to be a place of warmth and security for shy children looking for a place to call their own. I spent my evenings teaching English as a Second Language classes to adults. That was easily one of the most rewarding experiences of my life. I am motivated daily by the drive and enthusiasm these adults have for life and learning as well as by their optimism for a better tomorrow.

The Dorothy Bennett Mercy Center reaffirmed the importance of community for me. It gave me a deeper understanding of the commitment, sacrifice and hard work it takes to create and grow a shared life.

Who are your heroes? Why?

That's difficult. I have so many influences that it's hard to determine where they cross the lines into heroes. Off the top of my head, Cesar Chavez for the courage to speak out in defense of migrant workers. And literary hero Gloria Anzaldua for daring to look at the world in a different way and for refusing to compromise her cultural style despite institutional academic pressure.

I remember as a child looking for the painting of God among the ones on the ceiling above the altar in St. Lucy-St. Patrick Church. It was of Jesus among the angels of heaven. The anthropomorphic, Anglo portrayals of God were always uncomfortable for me. They never felt welcoming -- I remember being slightly afraid of them. God would appear like a disciplinarian, an authoritarian. All things that do not fit into the way I conceive of God now. Still, it seems pretentious to say you know what God, that great mystery, is.

Can you identify the central core of your faith?

God as love, and love as God. The Golden Rule. Treat others as you would want to be treated. Love one another. Do good works. Faith is a call to action. I identify strongly with faith. It's an admission of humanity, fallibility and humility. I don't know what's going to happen, I don't know exactly how the world came to be, what exactly our purpose (if any) is, and I don't even fully know the universe around me. I can only choose to believe in the example of Jesus and his message and mission. I choose to try. Simply to try, because to try implies that I have hope that the way of Jesus is a way worth following. Faith accepts God being so far beyond our understanding as human beings that we can only try for comprehension. We need humility to remind us that, in fact, the universe does not revolve around us.

What is your image of the Catholic church?

I can't say I identify with the larger church, but I recognize it as the cultural/societal institution that has been a vehicle for change, revolution, safe harbor and conversion for a long time.

What teaching from Scripture most challenges you?

The story of the prodigal son challenges my concept of fairness and justice. I have always understood fairness as not equating equality (as in, fairness does not mean giving two children the same quantity of cookies, for example, or treating them exactly the same way), but the reward/punishment of what is fair and just is tried by that story.

I come to a sort of truce with it by trying to admit that the story reminds me about doing right regardless of what it may reward or cost me, of always trying to welcome someone back in, of the longing to be helped and accepted I would feel if I would come to trouble. It reminds me of duty, family and commitment to community. The line by the father responding to his hurt, obedient son of why the big fuss was being made over the return of the shamed son as opposed to the under-appreciation he feels for completing his duty -- loosely paraphrased, "You I have with me always, but your brother has just come back to us after a long time."

Did you see any of this in action?

When I worked in the center, I would notice that fairness isn't based on giving everyone the same thing. I'd find myself giving one child extra time and help on basis of need.

Greed. The worship of the dollar bill and the esteem we have placed on images and material possessions. I'm saddened by the disrespect we have toward our planet and the way so many treat others on a daily basis. I see that it's possible to be surrounded by people and still be lonely. Some seem to be invisible to the rest of their world.

What gives you joy?

Summer. The sun. The smile of a child. Family and friends.

When I hear about people who just won't quit. As long as they are out there, there is a chance.

I love riding my bike with my younger brother, Omar. Sometimes we just ride to see how the road ends.

Work with LCWR led to advocacy to end human trafficking