John J. Snyder, Bishop Emeritus of the Diocese of St. Augustine, Fla., was born in Manhattan to the late John Joseph and Katherine Walsh Snyder on Oct. 25, 1925. Jack, as he is known to his friends, grew up in Queens, N.Y., with a younger brother and an adopted sister. Their home had a finished basement, which became a welcoming gathering place for relatives and friends. 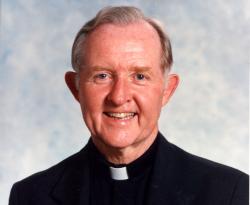 So when Bishop Snyder left Brooklyn, it wasn't to escape the northern cold, but to bring the warmth of "Peace in Christ," his chosen Episcopal model, to the people of St. Augustine. Mine was one of many hearts that ached to see him leave.

Sr. Camille: Bishop Snyder, who was most influential in your life?

Snyder: I'd have to cite three people -- my parents and my older brother, Bud. Bud was a sterling example of my parents' qualities of gentleness and caring. He was at the University of Delaware studying to be an officer when he was drafted into World War II. He was killed in action on his second day in combat.

That must have been a terrible loss for your family and beyond.

It was. Nothing can minimize the pain of that; however, the loss of our servicemen and women brought the nation together. Just about everybody was behind our involvement in WWII. That's unlike our tragic engagement in Iraq and Afghanistan. We should never have gone there.

You must have missed your brother terribly.

You're right. Bud was greatly loved. The girl he was going with never let go of us. She married and had seven children, but to this day, 67 years later, she still keeps in touch with us.

Do you think you're like your parents and brother?

Well, I hope I'm caring, and I'm usually patient. There's something else I have in common with them: I love sports, especially baseball. Since 1936, I've been rooting for the St. Louis Cardinals. I was ecstatic in the middle of the night they won the World Series!

That's a long loyalty. Do others know about this commitment?

I've heard that you continue to attend sports events in the Jacksonville, Fla., high school that bears your name.

I go to most of the home games at BJSHS. I also celebrate Masses there for individual classes, for the closing of retreats, for the juniors' ring day and for holy days and holidays like Thanksgiving.

Are you close to your adopted sister?

Indeed. She's a widow now, living in Pennsylvania. I spent Thanksgiving with her, her children and grandchildren.

One who is loving and forgiving.

Has that perception changed over time?

When I was young I thought of God as a judge. Now I see God in the person of Jesus, more as a brother and companion on the journey.

What accounts for the change?

I think time adds to the growing consciousness of so many needs and to a deepening awareness of the paschal mystery. In the past, we focused on Christ crucified and not very much on the resurrection. The Suffering Christ is not end of the story.

Actually, two. Matthew 25 and John 14:23. "Anyone who loves me will keep my word and my father will love him and will care for him."

If we combine those two selections, we see God's embracing care for those who feed the hungry, shelter the homeless and visit the sick and imprisoned. How do you bring those goals into your life and the lives of others?

I'm involved with Jean Vanier's L'Arche home. That's a permanent residence for people with developmental disabilities. L'Arche assures their families they will be well cared for life. Last year, they honored me for supporting them for 25 years. I'm still on their board of directors.

I'm also involved in three communities of young people recovering from different kinds of addictions. They range in age from 18 to 40 and must commit to a three-year program. It was founded by a Mother Elvira about 20 years ago and has become a global network. I celebrate Mass there and hear confessions.

Are you inspired by any saint?

He was a wonderful confessor and I share the desire to extend forgiveness to people in need of it. In the past, we spent long hours listening in the dark. Now I will not get behind a screen any more. I want to look into the penitent's eyes. You can understand them so much more when they're in front of you. If someone says, "I've had an abortion," you can see their pain. You look at them as you offer healing. You encourage them to let go.

Do you have any heroes?

How did that woman get in with those stalwarts?

Dolores and I worked on a number of committees. I was chair of Women's Commission. She's such a smart woman. Now she's working with the Jesuits of Woodstock.

You are on the record as a strong opponent of capital punishment. Why is that?

No one has the right to take life. When you think of who approves the death penalty, including Iran and China, these aren't nations you want to be aligned with,

Some years ago, I got a call from a psychiatrist in New Mexico. He said, "Bishop, I want to talk about the Sullivan case. He's scheduled for execution, but he's not a violent man." He was sure he was innocent. His companions in crime were hit men for the Mafia. I brought his case to "Good Morning America" and to ABC's "Nightline" to no avail.

Are you still involved in prison ministry?

I go twice a month to a death row in Florida's Union Correctional Institution. The most difficult part is that you have to stand for three hours ... going from cell to cell.

Have you become especially concerned about anyone on the row?

Tommy Ziegler has been in UCI for over 36 years. He was accused of murdering his wife and her parents. When the crime took place, without the benefit of DNA, the authorities blamed Tommy for the triple homicide, citing that his blood was on his father-in-law's shirt. When DNA testing became available, the results proved them wrong. In addition, two policemen on the case told him in writing they'd made a terrible mistake. His case remains under review.

Tommy has become a Catholic and longs for the Eucharist. His letters are warm and filled with concern for others. I'm glad that a wonderful priest, Fr. Slawomir Bielasiewicz, is involved in this ministry.

What about your faith is most meaningful to you?

That I am loved by God and called to share that love.

Can you identify some challenging, growth-producing experiences?

What positive changes in the church have you seen in the course of your priesthood?

Do you think those values are being honored in today's church?

Not to the extent that I hoped. There's a movement to retrench. The focus is too much on internal stuff. Can you imagine the bishops' conference meeting these days and not talking about poverty? Fortunately, our new bishop of St. Augustine, Felipe Estévez, is a gift to our diocese.

Bishop Snyder, as you may recall, I happened to be in St. Augustine visiting relatives when you retired in 2000. The accolades for your service that filled the secular and religious press were equaled only by regrets that the city was losing its favorite religious leader. Which of your accomplishments as bishop of St. Augustine give you the greatest satisfaction?

How do you feel about Voice of the Faithful or other lay-initiated groups?

We need to create instruments of listening and using brains like these on the local level. So many good people are involved in these things. They're not rebels. I wish the exchanges weren't so confrontational. In general, I believe local churches should have more input to diocesan leaders.

It seems to be closing in rather than reaching out. I find the growing clericalism disturbing.

What causes you joy?

Those who live the Gospel as well as proclaim it. I rejoice in the accomplishments of Maryknoll missionaries as they celebrate their 100th anniversary.

Young people who are committed to service

Is there something you didn't ask?

Editor's note: The original version of this interview contained factual errors in the case of Tommy Ziegler. The errors, for which NCR apologizes, have been corrected.

Mercy sister teaches about the Holocaust to prevent indifference

Brooklyn pastor: 'I'm the most blessed priest in the world'