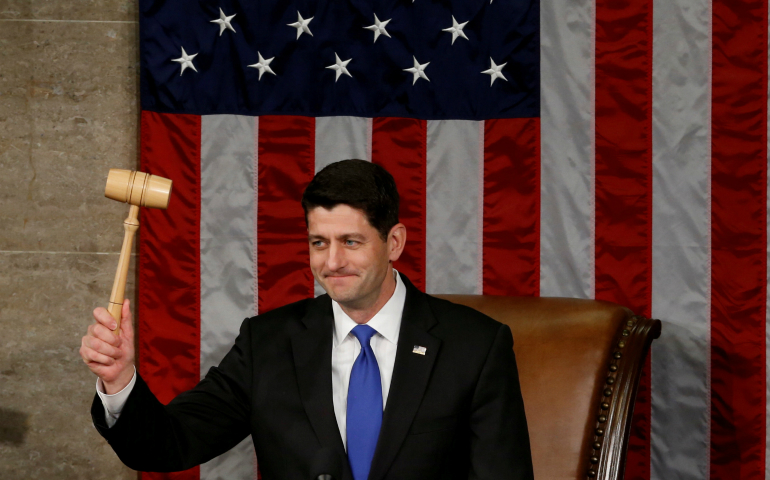 U.S. House Speaker Paul Ryan, R-Wis., raises the gavel during the opening session of the new Congress on Capitol Hill in Washington Jan. 3. Ryan, who is Catholic, was re-elected speaker of the House of Representatives earlier in the day. (CNS photo/Jonathan Ernst, Reuters)

The new Congress took office yesterday, with the Republican Party in firm control of both chambers and armed with an ambitious agenda. And, unlike the previous Congress, in less than three weeks, they will have a Republican at the other end of Pennsylvania Avenue willing to sign most, if not all, of what they pass.

Having one party in control of both the legislative and executive branches is not an oddity. When President Barack Obama was elected, the Democrats controlled both chambers for two years. In fact, their 60-vote majority in the Senate was sufficient to frustrate all filibusters, provided they could keep all the Democrats on board. When President George W. Bush took office, the Republicans controlled both the House and the Senate, until May 24, 2001, when Sen. Jim Jeffords of Vermont decided he would caucus with the Democrats. In the midterm elections the following year, the GOP re-took control of the Senate and maintained control of the House.

Two things are different this year. First, Obama had run, in part, on his willingness and ability to fix the partisan gridlock. The Republicans quickly let it be known that they wanted no part of working with the new president. Sen. Minority Leader Mitch McConnell did not publicly state until two years later that their principal objective was, not the good of the country, but making Obama a one-term president. That determination had been privately made by the GOP leadership. They fought the new president's stimulus bill and his effort to revamp health care.

"I think there was a unique benefit to Republicans in obstructing the Obama agenda," Sen. Chris Murphy (D-Conn.) told The Washington Post. "In 2008, Obama's entire premise was built on fixing Washington by ending partisanship. It was dependent on getting two parties to work together. ... Trump pays lip service to bringing people together, but his theme is that 'only he can fix it.' That's about results, not whether Washington is 'working,' so there's not the same political benefit to pure obstruction." It is an astute observation.

"I also thought Murphy's point was a wise one. I think a key difference is less between Democrats and Republicans than between traditional presidents and Trump," says Matthew Green, a politics professor at Catholic University who specializes in Congress. "Presidents of both parties have at least made gestures towards bipartisanship after being elected. But Trump has made almost no pretense of graciousness or outreach to Americans who voted against him. It's an interesting approach, and while it may help Republicans push for conservative policy in the short run, in the long run it may galvanize Democratic voters and damage the GOP's ability to win votes in swing states and districts."

Second, Donald Trump did not really run on the policy agenda that the congressional Republicans had championed the past few years. One of those issues, health care reform, is already on the radar screen of Catholic leaders who, whatever their reservations about the contraception mandate from the Department of Health and Human Services, know that the Affordable Care Act, aka Obamacare, has greatly benefited Catholic health care.

Trump promised to repeal Obamacare, but replacing it is proving more complicated than staging a show vote, or dozens of show votes, as the GOP did in recent years. Because the Republicans do not have a filibuster-proof majority in the Senate, they must try to squeeze as much of the reform into the reconciliation process, which only requires a simple majority vote. "Senate Republicans can use the reconciliation process, which cannot be filibustered, to enact substantial changes to Obamacare," Green explains. "The trick is to make sure those changes are related to taxes or spending, which is a requirement of reconciliation. Also, reconciliation can only be used once per Congress, so Democrats will be free to filibuster any other legislation Republicans try to pass. But they may be cautious about doing so, since Republicans could well do to them what Democrats did to Republicans and change the Senate's rules to further limit filibustering."

Trump also promised not to touch Social Security or Medicaid, and the privatization of both programs is a long-time goal of Republicans in Congress. Foreign relations, especially as they relate to Russia, have already emerged as a point of contention between Republican hawks like Sen. Lindsay Graham and Sen. John McCain and the incoming administration.

The Constitution is so arranged as to create a bit of antagonism between the executive and legislative branches, even when they are both controlled by the same party. The "separation of powers" involves the allocation of power, and politicians of all varieties tend to be jealous of the power they have acquired. Complaints by presidential candidates about executive overreach by the incumbent get buried once the challenger assumes those powers. Congress, jealous of its own power, resists. "We should expect to see at least a small handful of Freedom Caucus and Liberty Caucus members push back against Trump on that score," says Green.

The great British statesman, Benjamin Disraeli, when he first ran for parliament as a Radical was charged with being "a Tory in disguise" to which he replied that "the closest thing to a Tory in disguise was a Whig in power." In addition to the text of the Constitution and the fiber of human nature, Trump's unpredictable nature, and utter lack of knowledge about how government works, holds out the potential for as much conflict within the GOP as between the Republicans and the Democrats.

Still, there is a strong likelihood that on Trump and Congress will be working hand in glove on a variety of issues of special concern to Catholics. Relaxations of environmental regulations are likely and gun control legislation is off the table entirely. Efforts to repeal the Dodd-Frank law, which set limits on how banks operate and so avoid a repeat of the 2008 economic meltdown, are likely to prosper, increasing income inequality at a time when it has been greater that at any time since the first Gilded Age. And, of course, Congress could fund a border wall with Mexico and a more rigorous deportation system, although Trump's discretionary authority may be sufficient to crackdown on immigration.

Finally, because history stops for no man, the new Congress and new president will likely confront issues that are not even on the radar screen today. "There may be unforeseeable issues that emerge — what Donald Rumsfeld called 'unknown unknowns,' " says Green. "If the past is any guide, 'expect the unexpected' will be a key theme of a Trump presidency." Congress will have to cope with this unpredictable president. The Republican leadership may soon be thinking wistfully about ... the Obama years.