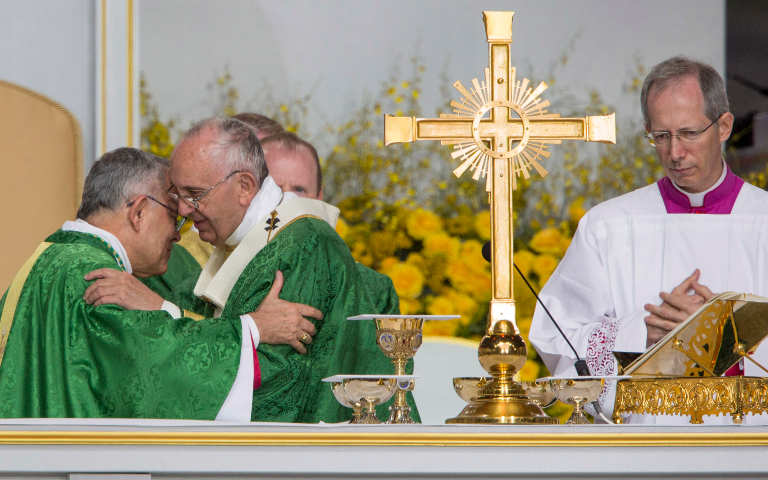 Pope Francis and Archbishop Charles Chaput at Mass for the World Meeting of Families in Philadelphia Sept. 27. (CNS/Rick Musacchio)

Two news items yesterday invite us to reflect upon rules and our relationship to them. In Philadelphia, Archbishop Charles Chaput released guidelines for the implementation of Amoris Laetitia, Pope Francis' teaching document on family life, for his clergy and those engaged in ministry to families. And, in Washington, FBI Director James Comey announced that the bureau was not recommending an indictment of former Secretary of State Hillary Clinton over her use of a private email account and server but, in a break from tradition, he went into some detail about the reasons for the decision and the results of the investigation.

Archbishop Chaput's guidelines invite a very specific question: Why did Pope Francis and the synods of bishops bother? You would not know it from what he writes that anything had changed in the Church since the ink dried on Familiaris Consortio, Pope John Paul II's 1981 apostolic exhortation on family life. For example, you would not know that the synod fathers voted overwhelmingly last year to consider the possibility of the internal forum for those who are divorced and remarried civilly. Archbishop Chaput writes: "Because marriage is a public reality, and because a determination about the validity of a marriage affects the lives, the rights, and the duties of all parties touched by it, there must be a canonical process and a decision by the proper authority under canon law." So much for the internal forum.

If you read Amoris Laetitia, you are aware that for Pope Francis, the Christian teaching about marriage is about so much more than sexual relations. His beautiful reflections on St. Paul's hymn to love and his homely remembrances of the families he has encountered as a pastor both attest to this fact. Alas, in Philadelphia, it is all about the genitalia. Archbishop Chaput instructs those who are to accompany people in difficult situations:

With divorced and civilly-remarried persons, Church teaching requires them to refrain from sexual intimacy. This applies even if they must (for the care of their children) continue to live under one roof.

There is no sense here that the two people might love each other. There is nothing that speaks to the ways God sometimes enters through the smallest of openings to bring His love and mercy to the people of God. There is nothing except the rules. Archbishop Chaput should be awarded an honorary doctorate in deontology.

The archbishop gives a nod at the beginning of his guidelines to the key emphasis Pope Francis places on discernment in Amoris Laetitia, quoting from the text:

What we are speaking of is a process of accompaniment and discernment which "guides the faithful to an awareness of their situation before God. . . . [T]his discernment can never prescind from the Gospel demands of truth and charity as proposed by the Church" [Amoris Laetitia 300].

But, in the succeeding paragraphs he makes it clear that he knows the outcome of that discernment already. The idea that consciences could reach different conclusions because the situations in which the rules are applied are fundamentally different, is not raised as a possibility. The objective always trumps the subjective in this view of the world, although most of us have come to realize, and the best pastors have long known, that the truth resides in both the objective and the subjective, and if either is excluded, the other has overstepped its human bounds.

Indeed, Archbishop Chaput's insistence on clinging almost exclusively to the objective is directly contradicted by Pope Francis in Amoris at #304:

It is reductive simply to consider whether or not an individual's actions correspond to a general law or rule, because that is not enough to discern and ensure full fidelity to God in the concrete life of a human being.

Am I being too tough on Archbishop Chaput? He writes:

Even where, for the sake of their children, they live under one roof in chaste continence and have received absolution (so that they are free from personal sin), the unhappy fact remains that, objectively speaking, their public state and condition of life in the new relationship are contrary to Christ's teaching against divorce. Concretely speaking, therefore, where pastors give Communion to divorced and remarried persons trying to live chastely, they should do so in a manner that will avoid giving scandal or implying that Christ's teaching can be set aside.

Can I say that the concern about giving scandal has become so thorough here that the concern is itself a source of scandal. So intent are prelates like Archbishop Chaput in refusing to think there is anything really worth discussing here, they wish to shut down and foreclose the pope's obvious invitation to discussion and adult decision making. They have the answers and anyone who questions them causes scandal. "I thank thee, Lord, that I am not like other men. ..."

When Archbishop Chaput gets to the situation of gay and lesbian Catholics, he declines to even show the simple respect of referring to gays and lesbians as they refer to themselves, adopting the awkward, and rude, circumlocution "those who experience same sex attraction." As Archbishop Blase Cupich pointed out recently, this avoidance of the words "gay" and "lesbian" comes 30 years after the Congregation for the Doctrine of the Faith called on all Catholics to treat gays and lesbians with respect.  When such respect is seen to coincide with even the tiniest possibility that an opportunity to denounce homosexual relations as sinful will be missed, too many prelates follow Archbishop Chaput and decline the respect and seize the opportunity. I would note that Amoris, by contrast, refers to the passages in that 30-year old text that call for respect and declines to cite the passages that contained condemnation.

What does not seem to occur to Archbishop Chaput is that doctrine develops. Indeed, while he may try to wrap himself in the "timeless truths" of Pope John Paul II's magisterium, others who were closer to John Paul II than the archbishop ever was, have seen how he, too, developed doctrine in this area and how Francis is simply moving along a path John Paul II began, albeit moving in a different direction from that desired by some who champion the late pontiff. Rocco Buttiglione, in this interview with La Stampa, made this point quite clearly.

In the case of Mrs. Clinton's email server, I think it is fair to say that she not only believes doctrine develops, but she is willing to make up that doctrine on the fly. She probably cannot spell deontology and, while the FBI decided there was no criminal wrong-doing in her email server mess, or at least no criminal wrong-doing that was sufficiently provable as to warrant an indictment, the perception lingers that Mrs. Clinton, like her husband, thinks the rules do not apply to her or to people like her.

Clinton thinks her money-grubbing speaking fees are justified because she was the one giving the talk and the price was set by the market. It was OK for her husband to lie to investigators about his sexual relations with Monica Lewinsky, and to lie to his wife, because to do otherwise might have cost them their power. For Clinton, all truths are poll-tested first. It is hard not to admire the purity of this Machiavellianism. Indeed, I suspect if she wins the presidency, her Machiavellianism will be less of an impediment to effective governance than Barack Obama's self-perception that he is a philosopher-king who knows best. Neither man would like to hear it, but President Obama and Archbishop Chaput have more in common than either would like to admit, and than either has with Clinton. They are convinced they are right. She wants to win.

I care less about Clinton's tendentious denials of wrong-doing than I care about Archbishop Chaput's attempt to put the Amoris Laetitia toothpaste back into the tube, because I care more about the Church than about the country, but I would not want to break bread with either of them. Both are, if not exactly self-absorbed, self-referential to a shocking degree. There is something unseemly about politicians who crave the validation of others, but there is something unseemly about extreme self-validation too. In a politician, it may be expected, but it leads to isolation and bad judgment calls. In a pastor, it is appalling per se, and it leads to the kind of religious worldview we associate with those who opposed Jesus of Nazareth when He walked the earth.