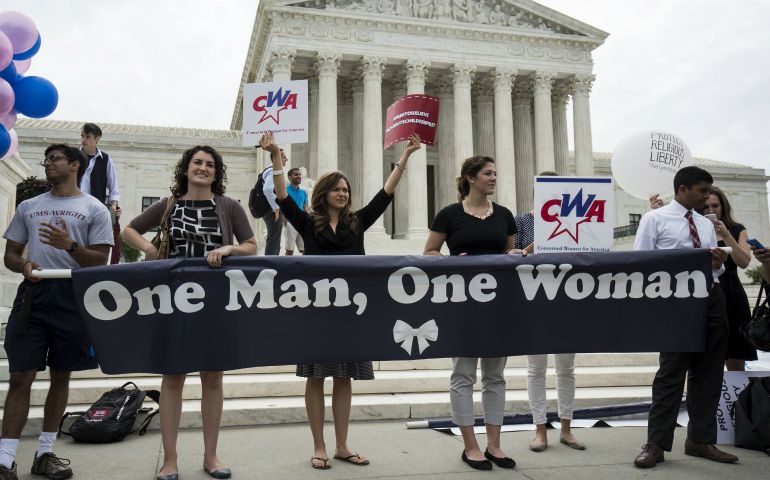 Supporters of traditional marriage between a man and a woman rally in front of the U.S. Supreme Court in Washington June 26, 2015,shortly before the justices handed down a 5-4 ruling that states must license same-sex marriages and must recognize same-sex marriages performed in other states. (CNS photo/Joshua Roberts, Reuters)

Bishop Thomas Paprocki of Springfield, Illinois, should be sacked. He issued a decree last week setting guidelines and limits for how the pastors in his diocese treat people in same-sex marriages. The decree is so completely at odds with the direction Pope Francis is trying to take the church, so excessive in its perception of the cultural significance of gay marriage, and so unlike the example of Jesus presented in the Gospels, it warrants the extreme sanction of removal from office proposed in the motu proprio, Come una madre amorevole.

Bishop Paprocki's decree states, uncontroversially, that no priest or other minister of the Catholic Church can preside at a same-sex marriage. No one so far as I know has proposed otherwise. More controversially, the decree states that people in same-sex marriages should not present themselves for Communion, nor should they be admitted to holy Communion, meaning that a priest can deny them the sacrament. The decree also states that no one in a gay marriage should be allowed to serve in a public ministry, "including but not limited to reader and extraordinary minister of Holy Communion." A few other bishops have set forth similar guidelines, although the vast majority has not.

Most controversially, the decree states regarding funeral rites:

Unless they have given some sign of repentance before their death, deceased persons who had lived openly in a same-sex marriage giving public scandal to the faithful are to be deprived of ecclesiastical funeral rites. In case of doubt, the proper pastor or parochial administrator is to consult the local ordinary, whose judgment is to be followed.

Of course, a Catholic funeral is as much about the bereaved family as it is about the deceased. It is morally obscene to suggest that a grieving family, whose thoughts about the same-sex marriage may not even be known, but who have experienced a loss, should be made to endure yet more pain because Bishop Paprocki wants to make a point in the culture wars.

In Amoris Laetitia, Pope Francis writes, "It is reductive simply to consider whether or not an individual's actions correspond to a general law or rule, because that is not enough to discern and ensure full fidelity to God in the concrete life of a human being." (#304) It is hard — no it is impossible — not to see how Paprocki's decree is a perfect example of the kind of reduction Pope Francis warns against. Bishop Paprocki does not claim to know anything about these people in same-sex marriages except that one fact that they are in same-sex marriages — and that is enough.

I have a question for the good bishop. If I found out tomorrow I had cancer and only had six months to live, I would marry my former roommate, who is also a male. I would not do so because we are lovers, as we are not. I would not do so because I intended by that action to approximate in anyway the sacrament of marriage the church bestows. No, I would do so because, having been the executor of my dad's relatively small and simple estate, I know it would be much, much easier to deal with things like my bank accounts and, most especially, my dog if I had a legal spouse who lived on after me. Thanks be to God I do not live in the diocese of Springfield, Illinois, but if I did, would Bishop Paprocki deny me a Christian funeral? If so, what "manifest sin" would warrant that?

If I were a bishop, and I think we can all agree it is a good thing I am not, but if I were, I would issue a decree that Tom Paprocki can't be buried in my diocese. As it is, I suspect 95 percent of the bishops in this country were horrified by what Paprocki did, and the other five percent, while not horrified, would not follow his lead.

Jesuit Father Jim Martin, who just published a book calling for bridges to be built between the church and the LGBT community, responded to Bishop Paprocki's decree, writing on Facebook:

If bishops ban members of same-sex marriages from receiving a Catholic funeral, they also have to be consistent. They must also ban divorced and remarried Catholics who have not received annulments, women who have or men who father a child out of wedlock, members of straight couples who are living together before marriage, and anyone using birth control. For those are all against church teaching as well. Moreover, they must ban anyone who does not care for the poor, or care for the environment, and anyone who supports torture, for those are church teachings too. More basically, they must ban people who are not loving, not forgiving and not merciful, for these represent the teachings of Jesus, the most fundamental of all church teachings. To focus only on LGBT people, without a similar focus on the moral and sexual behavior of straight people is, in the words of the Catechism, a "sign of unjust discrimination."

Now, there is a difference between public and private sins, and Catholics who advocated for same-sex marriage elided the distinction: You can't argue that something as private as a person's sexual identity should not be subject to public scrutiny and then also demand public recognition of a same-sex union. But, Fr. Martin's broader point is well taken: This singling out of same-sex marriage as warranting such a unique and harsh response shows an inability to assess proper values. The most obvious threat to traditional marriage was never the few gay folk who wish to enjoy the legal protections that come from civil marriage. The most obvious threat is anyone, straight or gay, who commits adultery.

Bishop Paprocki is one of those increasingly few conservatives who insist that gay marriage is the hill upon which the church and the culture should fight and die. I would place Princeton's Robbie George and the Heritage Foundation's Ryan Anderson in this small group too. Most people recognize that there are other challenges facing our culture that are at least of equal significance as gay marriage. Even for most conservatives I know, the hill of same-sex marriage is 5 miles back, and we need to move on.

I would not normally think one bad decision by a bishop would warrant removing him from office. In the event, you may recall that Bishop Paprocki also performed an exorcism over the entire state of Illinois when the state's governor signed a bill making same-sex marriage legal in 2013. Has he learned nothing in the intervening time from the example of his brother bishops? None of them have taken this kind of draconian and plainly unhelpful action of decreeing no funerals for people in same-sex marriages. Will anyone be attracted to the Gospel by this decree?

The motu proprio Come una madre amorevole was issued in response to the need to remove bishops who have been negligent in the handling of clergy sex abuse allegations, but the text did not limit its scope exclusively to that single issue. When a bishop so misunderstands both the culture and the Gospel, to say nothing of the role of a bishop, that he would issue a decree like Paprocki has done, he has demonstrated that he is too unhinged to lead a local church. Before he does further damage, he should resign or be fired. ​