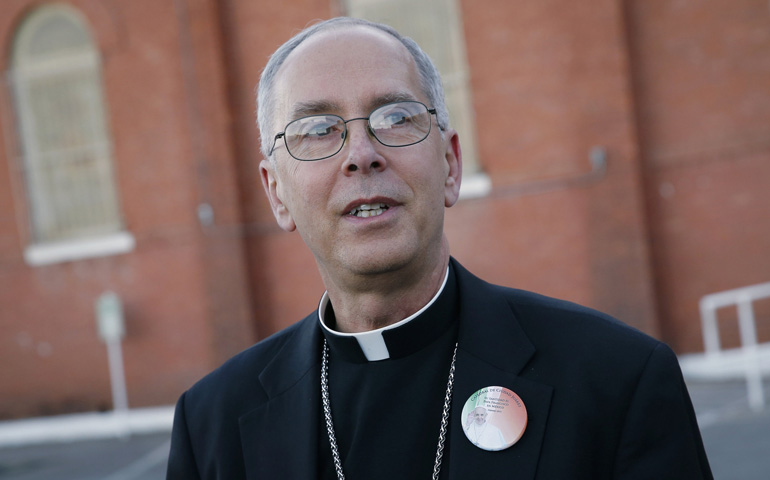 Bishop Seitz issued a pastoral letter on immigration yesterday and it is remarkable, beginning with its title. The document is called, "Sorrow and Mourning Flee Away," and begins with a verse none of us had ever before associated with the fight for justice for immigrants, Isaiah 35: 7, 10: "The burning sands will become pools, and the thirsty ground, springs of water … And the ransomed of the LORD will enter Zion singing, crowned with everlasting joy. They meet with joy and gladness … Sorrow and mourning flee away."

We have heard other Scripture passages demanding we treat the stranger well because "you, too, were strangers in the land of Egypt." But, the legal injunctions assume we are not the stranger any longer. This passage from Isaiah reflects the view from that of the migrant (I had almost written "pilgrim"), entering Zion, a once distant and harsh land made fertile and welcoming. It is the view of the migrant arriving at her destiny, under the shadow of God's protection. It acknowledges the pain and the hardships, but doesn't give them the last word. "Our faith should always give us hope," the bishop said on a conference call with reporters yesterday. He added that this letter, though intended for his entire flock, was "addressed especially to our migrant community, a community who live in a lot of fear now, reminding them that God is present."

Bishop's Seitz's pastoral letter is the first to be issued on this subject by a bishop in ten years. More importantly, it is the first ever to specifically and repeatedly denounce the militarization of the border between the United States and Mexico. There really is no "macro level" discussion when you are the bishop of a border city, indeed of a city that once spanned both sides of the river, until the border came to the community. He debunks the idea that El Paso is a dangerous place and argues that the breakdown in community policing caused by the effort to make local police enforce immigration laws will actually make his see city more dangerous.

"I am bishop of a flock frightened by the flashing lights of police cars in the rearview mirror, who wonder if this family outing or that drive home from work will be the last," Seitz writes. "I am spiritual father to thousands of Border Patrol and ICE agents, who put their lives on the line to stem the flow of weapons and drugs and those who carry them. Many agents are troubled in conscience by divisive political rhetoric and new edicts coming from Washington, D.C." Catholic conservatives usually tout the value of subsidiarity and mistake it for a mandate for smaller and more local government, but on this issue, not so much.

Bishop Seitz reminded the reporters on the call that entering the U.S. without proper documentation is not even a criminal offense yet politicians have manipulated the issue such that you would think it is one of the worst violations of the criminal code. "We must also beware of those 'doctors of the law', the scribes and Pharisees of our day, who self-righteously hold others to a standard they would never apply to themselves," he writes in the letter. "They attempt to enforce the minutiae of the law meanwhile ignoring the unbearable burdens they are laying on children and families (cf. Matt. 23: 1-23)." On the call, the bishop noted that the Gospel has many stories in which these doctors of the law attempt to enforce "little legalisms" while ignoring massive injustices. "It made Jesus angry," said the soft-spoken bishop. "Maybe it should make us angry too."

Another very important part of this letter is Seitz's frank discussion of the root causes of immigration. "As a country, we are involved in the drivers of migration, through things like unfair trade policies, our addiction to drugs and even climate change." After years of politicians whining about drug cartels "poisoning" our kids, how refreshing to hear the voice of reason, as well as conscience, remind us that the drug market is subject to the laws of supply and demand, producing violence that drives people north. I would add that our nation's drug habits are responsible for the breakdown of civil society in large swaths of Mexico.

Bishop Seitz told the story of a man who fell afoul of the gangs in his city in Mexico and they cut off both of his legs. He survived the attack and fled to the United States seeking asylum. His case is not complete yet he could be sent back. How is this possible? The section of the letter on the "Power of Encuentro" relates similar stories, especially those that show how much migrants contribute, viewing them not as mere victims of a broken system, but of men and women with gifts we deny to ourselves when we keep them from remaining a part of our communities.

The bishop calls for a moratorium on the detention and deportation of nonviolent migrants. He also announces the establishment of a new scholarship fund for migrant children to attend Catholic schools. He announces a directive to all pastors and principals that government agents are not to be permitted on church property in any enforcement action without a warrant. He is setting up a commission to continue applying the Gospel vision he outlines in the policies and parishes of El Paso. To those outside the border communities he says, "Come and See!"