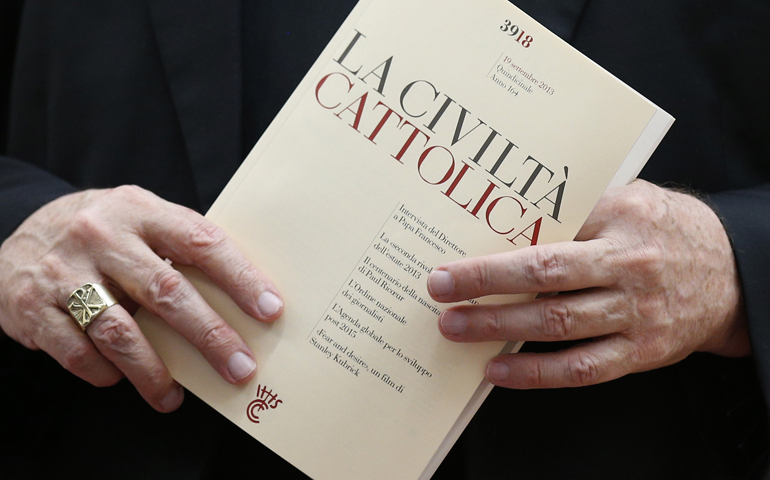 : An issue of the Italian journal La Civilta Cattolica is seen at the Vatican in this 2013 file photo. (CNS/Paul Haring)

Yesterday, I considered ways that the Civiltà Cattolica article by Jesuit Fr. Antonio Spadaro and Rev. Marcelo Figueroa challenged the Christian and Catholic left as well as its obvious targets on the right. Last Monday, I had responded to a particular rebuttal of that article, penned by Fr. Raymond de Souza. Today, I wish to carry the conversation a step further by addressing concerns raised by an additional rebuttal and Monday, July 24, I shall conclude this series — or at least I think so. As mentioned yesterday, This Civiltà piece has provoked some truly wonderful conversations this week and there may yet be more to say later on.

I begin by relaying a story I just heard last week. In the first years of this century, our friends at Communione e Liberazione were hosting a kind of street fair in Bryant Park, the little oasis of greenery tucked behind the New York Public Library in midtown Manhattan. A passerby was unsure of the nature of the gathering and he approached the late Msgr. Lorenzo Albacete, who would at most times be at the center of the gathering except when, as at this moment, he had drifted to the side to smoke a cigarette. "Is this some kind of protest?" the passerby asked Monsignor. "Yes," Lorenzo replied. "What are you protesting?" the man inquired. Lorenzo took a drag on his cigarette before answering, "Dualism." I am not sure the joke works without my imitating Lorenzo's accent and mannerisms, but I hope so.

The Civiltà article attacked one form of dualism explicitly: The Manichaean worldview that separates people into two camps, the one good and the other evil, and it argued that this dualism characterized the alliance between conservative Catholics and evangelicals in the United States. They cited several examples. But, if those examples were not enough, up jumped Archbishop Charles Chaput of Philadelphia to offer a critique of the Civiltà article that, wittingly or not, was a perfect example of the Manichaean vision that the authors criticized.

"Dismissing today's attacks on religious liberty as a 'narrative of fear' — as the La Civiltà Cattolica author (sic) curiously describes it — might have made some sense 25 years ago," Chaput argues. "Now it sounds willfully ignorant. It also ignores the fact that America's culture wars weren't wanted, and weren't started, by people faithful to constant Christian belief."

First, he is wrong on the facts. Does the archbishop not recall Anita Bryant and her crusade against efforts to bar discrimination against gays? Does he not recall Proposition 6 in California, the 1978 ballot referendum that would have barred gay men and women from teaching, a form of bigotry so obvious that Ronald Reagan opposed it? Second, see how he immediately sees this, and seemingly every issue, as us versus them, the Christians versus the lions.

Chaput's latest book, Strangers in a Strange Land, provides many examples of his willingness to see those with whom he disagrees as civilizational threats. "The White House elected to power in November 2008 campaigned on compelling promises of hope, change, and bringing the nation together," he writes. "The reality it delivered for eight years was rather different: a brand of leadership that was narcissistic, aggressively secular, ideologically divisive, resistant to compromise, unwilling to accept responsibility for its failures, and generous in spreading blame."

Even if you believe that President Obama was a determined secularist, despite his penchant for reading Christian theology, Chaput's approach could scarcely be more at odds with the approach suggested in these words which were sent to me by "an anonymous fan on the West Coast" this week as part of this discussion:

I would say that both secular people and Catholics, seekers and believers, in the dense thicket of branches filled with many birds, must move toward each other with a new openness. Believers must never stop seeking, while seekers are touched by the truth and thus cannot be classified as people without faith and Christian-inspired moral principles. There are ways of partaking of the truth by which seekers and believers give to and learn from each other. This is why the distinction between Catholics and secularists is relative. Secular people are not a rigid block. They do not constitute a set denomination, or worse, an "anti-denomination." They are people who do not yet feel able to take the step of ecclesiastical faith with everything that such a step involves. Very often they are people who passionately seek the truth, who are pained by the lack of truth in humankind. Consequently they return to the essential contents of culture and faith, and through their commitment often make these contents even more luminous than an unquestioned faith, accepted more out of habit than out of the sufferings of the conscience.

Those are the words of Joseph Ratzinger in the book, Without Roots, which he co-wrote with Marcello Pera. Is there a reason that the zelanti in the U.S. cannot speak this way, cannot entertain this expansive and hopeful vision?

On the specific issue of religious liberty, Chaput has been among the most vocal bishops in happily joining in what can only be called a distortion of Catholic teaching on the subject, a distortion that has emerged from the "complicated political and religious web" the Civiltà article addresses. It is not, repeat not, traditional Catholic teaching that any claim that puts itself forth as a religious claim must be honored in the secular sphere. Our teaching is a delicate balance of the rights of conscience and the responsibility of the government to define and pursue the common good. It is nuanced. It is not the kind of bumper sticker Chaput and his confreres would have you believe.

The authors of the Civiltà piece do not recall the episode, but when Pope Francis came to the U.S., the apostolic nuncio arranged for him to greet Mrs. Kim Davis. Her lawyer was Mat Staver, a longtime aide to both Jerry Falwell Sr. and Jr. We will never know who arranged that meeting but it shows the web exists and that it corrupts. Recall that Mrs. Davis did not go to jail for practicing her religion. She went to jail for trying to force other people to practice her religion. Why did some conservative evangelicals and Catholics champion her cause? Because she was fighting gay marriage. The fact that she ran roughshod over religious liberty was ignored. That is the kind of distorting affect the alliance has produced.

There are other distortions that have occurred as a result of, or at least been exacerbated by, this alliance. I agree that abortion is one of, if not the most, grievous assault on human dignity in this country. The blindness of the left on this topic is shocking: They usually defend the weakest and who is weaker than an unborn child? But, abortion is not the only assault on human dignity in our culture, and it does not justify a willful, chosen blindness to other moral concerns. Yet, Chaput has been among the prelates urging an ever more narrow focus on this issue, arguing that pro-choice politicians should not present themselves for Communion, castigating the University of Notre Dame for "prostituting [its] Catholic identity" by inviting President Barack Obama to speak at its commencement exercise and receive an honorary award, etc. I do not recall him saying that politicians who vote against environmental regulations, regulations necessary to protect all life on the planet, human and otherwise, should not present themselves for Communion.

The biggest effect, however, of this alliance may not pertain to this issue or that. It is the coarseness of the rhetoric, the demonization of those with whom one disagrees, the reduction of complicated theological principles like religious liberty or material cooperation with evil to soundbites and propaganda. Chaput and his culture warrior colleagues in the American episcopate may not exhibit the extremism of Church Militant, but they have dragged the Catholic Church in this country into an often ridiculous and thoroughly partisan stance that resembles that of the Rev. Jerry Falwell more than that of their own predecessors in the American hierarchy. And then they blame others that the pews are emptying out on their watch!

Monday I will look at an additional instance of dualism rearing its pernicious head among the rebuttals to Spadaro and Figueroa.