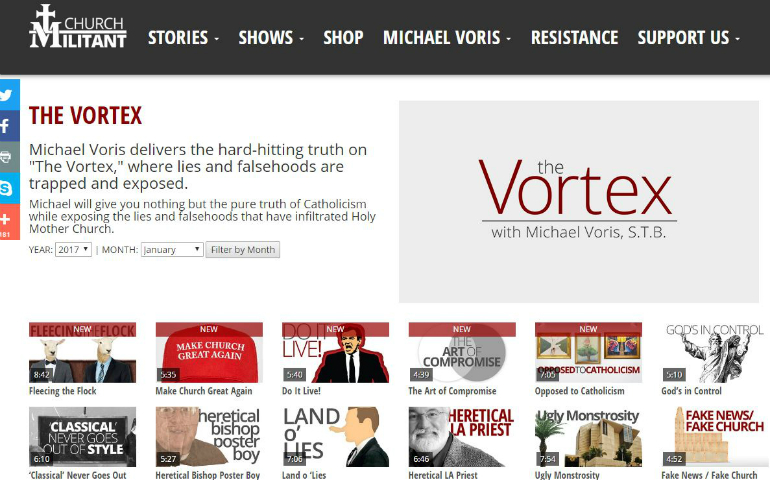 The Atlantic video about Church Militant and their founder Michael Voris was, at the same time, fascinating and frustrating.

The fascination stems from the easy way that normalcy and extremism seem to coincide in the lives of Voris and his colleagues. One minute he is eating pizza with his dad, and the next he is prepping for a broadcast that will, like all his broadcasts, be viciously extreme and extremely vicious. He drops by a Subway for a sandwich, and then is shown spouting gibberish.

"In all of the great debates we have had in America, we've never as a country sat down and had the debate over which of these religions is the right religion," he observes. Huh? We have that conversation almost every day, both among the churches and within them. What we have not done, mercifully, is let that conversation descend into a replay of the Thirty Years' War. The inability to recognize the value of tolerance is shocking. He is followed in the video by his colleague, Simon Rafe, who compares Donald Trump to the Emperor Constantine, in that he is allowing "the cream of the crop, the Christians, to rise to the top." I am not even sure what that means. I would love to know what Jared Kushner thinks of it.

The frustration with the video is that it provides no context to what Church Militant does. I am sure that a secular reader of Atlantic will be horrified by what they see and hear on this video, and that horror will overlap with mine, but I know, too, that there is a horror unique to a Catholic viewing this video.

Viewers should know that it is not just lefties like me who find Voris and his work revolting. After Church Militant and the Lepanto Institute criticized the planning of the World Meeting of Families in Philadelphia two years ago, the archdiocese issued this statement:

The Lepanto Institute and Church Militant have proven once again that they are not interested in presenting information in any useful way. Neither the World Meeting of Families-Philadelphia 2015 nor any of its leadership supports Planned Parenthood. The sole desire of both Lepanto and Church Militant is to create division, confusion, and conflict within the Church. Actions of that nature run contrary to Christian tradition. Their reports are not to be taken seriously.

Not often do you find me applauding a statement from the archdiocese in Philadelphia, but I give that statement a standing ovation.

From the video, you can see that Church Militant surrounds itself with some of the icons of Catholic culture. There is a little chapel at the studio and crucifixes everywhere. There is a photo of Pope Francis over one of the doors. A sign over another door reads "Mother Angelica Studio." The papal flag flies outside. One of the office cubicles has a photo of Archbishop Fulton Sheen tacked up.

But Church Militant regularly attacks other icons of our faith, especially those who are living and breathing. They are not fans of Pope Francis; instead they try to undermine his authority: This episode is artfully entitled "A Disgrace to the Chair of Peter." They attack Cardinal Donald Wuerl in advance of the Synod on the Family. They attack Cardinal Blase Cupich for a statement he made calling for a consistent ethic of solidarity, hurling nastiness at Cupich's predecessor Cardinal Joseph Bernardin for good measure. They attack priests like Basilian Fr. Tom Rosica and Jesuit Fr. Jim Martin, men whose work with the media is truthful, balanced and evangelical. They attack Catholic Relief Services, which daily helps the poorest of the poor discover lives that accord with human dignity.

Attack, attack, attack. They invert Lincoln's call: "With malice toward none, with charity for all." They dish out malice to all and offer charity to none.

What you will not find at Church Militant is much in the way of learning. The church's intellectual tradition is one of its true glories. Voris makes lots of assertions, but he doesn't have two theological pennies to rub together to save his life: There is none of the subtlety that must attend all forms of human knowing, and still less any humility of the kind that is appropriate when discussing the mysteries of God. Certainly, Jesus' prayer for unity does not get much reflection on air. Voris knows nothing about the history of the church, a history with much grey that doesn't fit well into the black-or-white vision Voris spews.

Voris and Church Militant stand in relation to the Catholic Church in the U.S. as Charles Maurras and the Action Française stood in relation to the church in France in the first decades of the 20th century. Extremist, disdainful of the hierarchy, divisive, tied to a vision of church and society that never existed, even though it is nostalgically invoked. I hope that no one outside the church stumbles across the Atlantic video and thinks this is the face of Catholicism at this moment in history.

Still, I am grateful that Atlantic undertook this effort. Those of us who write about the church are not wrong to watch and read the vile nonsense Church Militant produces and be repulsed by it. But it is good to remember that the people who produce that vile nonsense are people, people with parents and personal challenges, people who are more to be pitied for their anger than hated for the effects of their anger. And the bishops need to consider how they can ensure that no one mistakes Church Militant for the authentic church, which, day in and day out, cares for the poor, wrestles with the truth in humility, celebrates the sacraments and tries to build up the unity that arises from those sacraments, and applies the medicine of mercy to a hurting world. That is the Catholic Church I know and love, and that is the church that calls me to pray for those like Voris whose anger and vitriol cannot douse the flame of Christian charity no matter how hard they try.