The church is not a museum, so let Francis change things 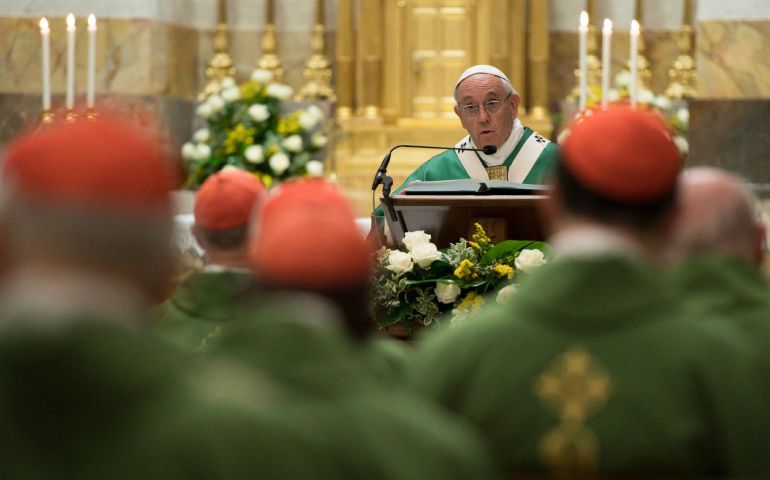 ope Francis speaks as he celebrates Mass with about 50 cardinals in the Pauline Chapel of the Apostolic Palace at the Vatican June 27. The Mass marked the pope's 25th anniversary of his ordination as a bishop. (CNS photo/L'Osservatore Romano)

The four cardinals with their five dubia are back. The four senior prelates — Cardinals Walter Brandmüller, Raymond Burke, Carlo Caffarra, and Joachim Meisner — sent a letter to the pope requesting an audience with him according to the National Catholic Register's Edward Pentin. They want to know why the pope never answered their dubia.

To refresh your memory, last November, the four cardinals sent a list of dubia, or questions, to both the pope and the prefect of the Congregation for the Doctrine of the Faith. The questions were not really questions so much as they were traps, first reducing the complex pastoral and theological issues to a "yes" or a "no" and also framing the questions such that only one answer could be considered plausible and orthodox. So, for example, the third question reads: "After Amoris Laetitia (301) is it still possible to affirm that a person who habitually lives in contradiction to a commandment of God's law, as for instance the one that prohibits adultery (Matthew 19:3-9), finds him or herself in an objective situation of grave habitual sin (Pontifical Council for Legislative Texts, "Declaration," June 24, 2000)?" This reads like the old press conference trick question: "When did you stop beating your wife?" There is no good way to answer that.

The Rev. Louis Cameli, archbishop's delegate for faith formation in the Chicago Archdiocese, demonstrated conclusively in an article in America why the pope was right not to respond. Cameli wrote:

The "dubia" are not really expressions of doubt or questions but rather assertions that "Amoris Laetitia" appears to have abandoned or altered key teachings of Catholic tradition, especially as they have been expressed most recently by St. John Paul II in his encyclical letter "Veritatis Splendor" (1993). … I propose that the "dubia" stem from a fundamental misunderstanding of the nature of "Amoris Laetitia" and, indeed, of the renewal that began with the Second Vatican Council and was fostered by John Paul II — including his encyclical "Veritatis Splendor."

This points to the comprehensiveness of the problem with the opposition to Francis. It is not just that they object to this issue or that statement, although they do. The problem is that they are trying to put the Vatican II-toothpaste back into the tube and it won't fit.

Normally, the idea that a cardinal is requesting an audience with the pope would not be newsworthy. My old friend Archbishop Roberto Gonzalez of San Juan, Puerto Rico, had two audiences with the Holy Father in as many weeks in June! But what is different about the request from these four cardinals is that they published the letter requesting the audience, and that is what the Romans call brutta figura!

It is not surprising that the letter found its way into the hands of Edward Pentin for publication. Mr. Pentin works part-time as the Vatican correspondent for the Register and part-time as a cheerleader for the opposition to Pope Francis. At the synod, other reporters noticed that Pentin made a beeline for Burke and other malcontents as each session disbanded.

Nor is it surprising that Raymond Arroyo should dedicate an entire segment to the audience request on his EWTN show last week, interviewing first Pentin and then Fr. Gerald Murray of the New York Archdiocese. Murray has been one of the most outspoken critics of Amoris Laetitia, and he seems to think that he, and not Pope Francis, is the authentic voice of the magisterium. Murray, like the four cardinals, wants everything and everyone to fit nicely into the little canonical boxes with which he is comfortable, and when life doesn't fit into those boxes, too bad for those not up to snuff. They should tough it out. Someone should remind Fr. Murray that we only put people into boxes when they are dead.

I have been renovating the house in which I was reared. I am making some significant changes: My mother was a woman of exquisite taste, but her taste was not entirely mine. For example, her favorite color was blue, and so the living room, hall and dining room were all blue, and the downstairs bedroom, the den and the kitchen all have prominent blue trim or blue curtains. Now, I loved my mother, and I like blue, too, but enough is enough: The dining room has been painted red. One day, my sister said I couldn't toss out a certain item I had marked for the dump because it had sentimental significance. I explained that I had no interest in living in a museum, that I had to make the house mine and make it livable, and that she was more than welcome to take the sentimental object herself, but for me, it was merely going to be in the way.

For the four cardinals, as for Pentin, Arroyo and Fr. Murray, the church is a museum and no one can alter anything within it. Pope Francis wants to make the church livable. He is not trying to throw out items just for the sake of change, but he is not afraid to fearlessly confront all that obstructs the proclamation of the Gospel. He recognizes the truth of what John Henry Newman said so long ago: "In a higher world it is otherwise, but here below to live is to change, and to be perfect is to have changed often."

Vatican | The church is not a museum, so let Francis change things

Report: Cardinal Woelki would step down if implicated in abuse cover-ups