Conscience, the woman at the well and adult discipleship 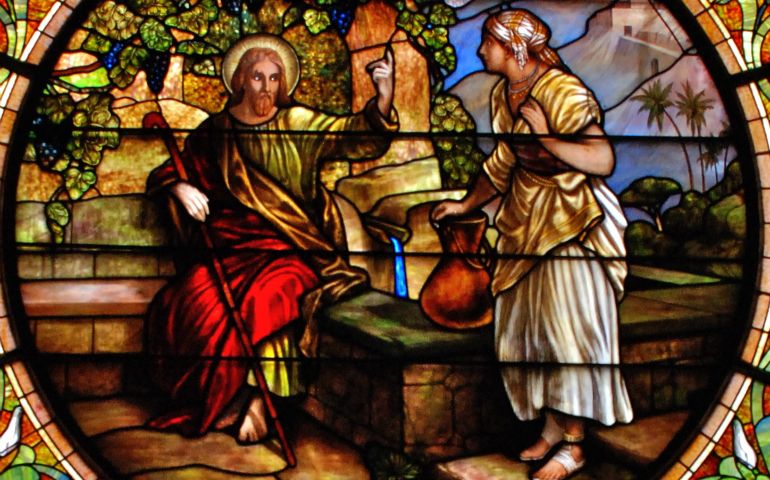 The Gospel reading yesterday was providential. The small, noisy group of conservatives, mostly Americans, who continue to challenge the teaching of Pope Francis and two synods of bishops relating to marriage and the family, deride the significance of conscience in moral decision making. The account of the Lord Jesus' interaction with woman at the well illustrates why their view is so impoverished.

Many of the Samaritans of that town began to believe in him because of the word of the woman who testified, "He told me everything I have done."

When the Samaritans came to him, they invited him to stay with them; and he stayed there two days.

Many more began to believe in him because of his word, and they said to the woman, "We no longer believe because of your word; for we have heard for ourselves, and we know that this is truly the savior of the world."

We are not able, like the Samaritan woman, to meet Jesus at the well. But, we can hear his voice. Conscience is the voice of God in our hearts and minds, not our own voice. It is Jesus who tells the woman everything she had done, some of which presumably no longer pricked her conscience. In examining our consciences, to look back and judge our past deeds and to listen to our consciences as we consider what we should so, we learn to listen to God who speaks through the moral law and offers the grace of discernment as to how that law and the extant situations of life cohere. If undertaken seriously and honestly, we can say with the woman at the well, "He told me everything I have done." Then, the effects of that grace spill out into the community, and Jesus stays with the community. Jesus finds no place to rest his head in an unclean conscience.

Recently, Boston College's Jesuit Fr. James Keenan published an essay at America that detailed the different ways European theological and social understandings of conscience developed in the latter half of the 20th century from those that developed in the United States. It is an important article not least because it shows that even the categories we bring to make sense of the world are not merely handed down from on high but are profoundly conditioned by social experience.

The core difference, according to Keenan, is that the Europeans had to wrestle with the fact of collaboration with sin during the two world wars in a way Americans never did. The moral consciences of millions of people had failed: This was demonstrable as were the horrible costs of that failure. In America, and not only in regard to World War II, we were tempted to believe, and tempted successfully, that we were the good guys in every way and had no cause for remorse. Our understanding of conscience formation was therefore crippled.

Appeals to conscience emerged later in the United States both during the Vietnam War and in response to "Humanae Vitae" in the personal appeals by young men drafted into an undeclared war and in the claims of married couples hoping for a change in church teaching on contraception. These moments of conscience were not begun, as they were in Europe, with the collective social acknowledgement of profound human violations of the moral law. When the Americans turned to conscience, they were pleading individually against the very law-and-order mentality that American Catholic culture had so strongly supported even as the Europeans turned in a different direction. (emphasis in original)

It is virtually impossible to overstate the significance of what Keenan is noting here. Americans placed law-and-order moralism in one silo and conscience in another and simply did not do the hard work our European friends had to undertake. Just as they had to rebuild their cities and churches after the war, they had to rebuild their moral structures, and they built better than we did in the States. We made conscience, improbably, an individual possession which it never is. Conscience always involved relationship, first with God who speaks to us in our conscience, and second with others who bear the brunt or the fruit of our moral decisions.

Keenan goes on to suggest five key attributes that we Americans should consider to rehabilitate a more robust understanding of conscience. First, "the judgment of conscience should prompt us to confront our sinfulness" and second, "when we discover our sinfulness, we discover our freedom." He notes that, "though deeply interior, the conscience is the key to our relationships with others, our world, ourselves and our God. As the Bible teaches us, through our consciences we examine our past histories and set the course of our future, always with others in mind."

The need for humility is a key theme of Keenan's. "A humble conscience keeps us alert to our environment, our neighbor in need, our own responsibilities and the need to take account of the future and its challenges," he writes. "Here we realize that the humble conscience engages — and sometimes interrupts — our agenda for our lives, which can so easily proceed automatically." This humility leads us to appreciate "the grace of self-doubt. In humility we discover that there can be a real grace in doubting ourselves and our opinions. This grace animates and informs our humility and helps us to see that the work of realizing ourselves as disciples of Christ is a formidable lifelong task fraught with misperceptions and yet possible precisely because of that humility." This is good stuff.

There are ecclesiological implications to this call for a stronger, richer understanding of conscience, not just moral ones. In a recent article in the Tablet, another Boston College professor, Richard Gaillardetz, writes:

Neither scepticism nor dogmatism are sufficient for the kind of mature engagement with Church doctrine that adult discipleship demands. Pope Francis seems like a revolutionary in the minds of many because, even more than his predecessors, he is committed to the council's call to adult, Christian discipleship; it is a theme central to his pontificate.

"Adult." It is a word one hears again and again from people who have found themselves challenged and encouraged by Pope Francis. And only adults can appropriate the insights about conscience that Keenan sets forth and which Gaillardetz places in a yet larger context, the context of the church.

We all know people who invoke conscience as a dodge, but then they are mistaking conscience for whim. And we all know people who see no role for conscience, even in decisions that are admittedly murky by all: Think of Judge John Noonan's powerful invocation of conscience at Notre Dame's commencement exercises in 2009. I used to think that Blessed John Henry Newman's Letter to the Duke of Norfolk was the last word on conscience, but Keenan and Gaillardetz have not only added to it, they show that Christians must wrestle with the significance, to say nothing of the burden, of conscience until the coming of the Kingdom. In the meantime they demonstrate that an adult conscience, attentive first and foremost to our sins, relational as well as interior, is integral to the church's work of instancing the Kingdom here and now. No one should be afraid to revive the centrality of conscience in Catholic moral theology.

Spirituality | Conscience, the woman at the well and adult discipleship

Take and Read: The Imperative of Human Responsibility