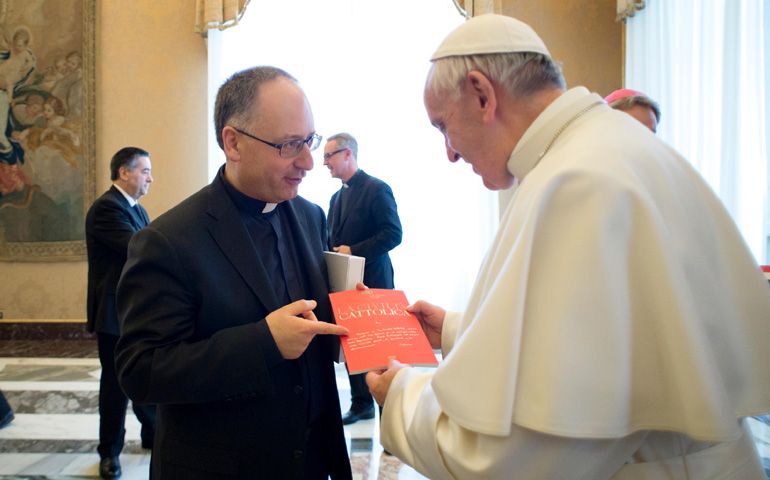 Of all the responses to the Civilta Cattolica article by Jesuit Fr. Antonio Spadaro and the Rev. Marcelo Figueroa, "Evangelical Fundamentalism and Catholic Integralism in the USA: A Surprising Ecumenism," one of the strangest was published at Catholic World Report by Samuel Gregg, director of research at the Acton Institute.

I say strange first of all because I was not aware the libertarian Acton Institute would have a dog in this fight. Surely, their embrace of hyper-individualism and devotion to the likes of Ayn Rand would be as repulsive to evangelicals as they are to orthodox Catholics I thought. But, Gregg's decision to jump into the fray is surely explained in part by the fact that Acton is part of the "complicated political and religious web" that the Civilta article rightly identifies as bringing together various groups to promote a shared political agenda, such as climate change denial. Acton, which gets lots of money from the extraction industries, was one of the leaders in the effort to diminish the authority of Laudato Si' within the Catholic community so it makes sense they would link up with evangelicals who oppose environmental protection on the dominionist grounds.

The strangeness goes deeper. While the original article criticized the dualism of Manichaeism, Gregg makes much of the fact that evangelicals have begun to adopt a different dualism, natural law thinking. He writes that evangelicals, in their effort to advance certain political positions they share with conservative Catholics, rely on "arguments [that] have increasingly been presented in terms of public reason. Catholics have a long tradition of doing this. Yet it is also an approach that many Evangelicals have started embracing in recent years. This does not add up to the imposition of theocracy or the claiming of special privileges, let alone trying to facilitate quasi-Throne-and-Altar arrangements or some type of Evangelical/Catholic American Nationalism. Contrary to the claims of Father Spadaro and Rev. Figueroa, this is not 'a direct virtual challenge to the secularity of the state.' It's about maintaining that the truths knowable by all people via their natural reason may be legitimately reflected in the public square of pluralist societies like the United States." There is much here to unpack.

The status of natural law thinking is very fluid at the moment. On the one hand, much of Catholic teaching still uses it to express and apply our teaching, although natural law itself can never be the subject of a magisterial claim: The whole point of natural law, to its followers, is that it does not rely on revelation. But, look at the catechism and you will see how thoroughly that text is imbued with natural law thinking.

On the other hand, ever since Vatican II, there has been a concern that natural law thinking can create a dualism between grace and nature that is untenable. This is not the place to recapitulate my thoughts on the important work of David Schindler Sr. and the Communio school more generally, but here is a link to a review I wrote years ago of his book Heart of the World, Center of the Church: Ecclesiology, Liberalism and Liberation. For our purposes today, it is enough to quote these passages, noting in advance that "liberalism" in this context means modern, Western liberalism in its broadest sense, not Democratic Party liberalism:

It is a fair question whether Jesus of Nazareth intended his teachings to be reduced to an ideology of Americanism, but religion must take a stance toward the world. This stance must be theologically informed and, whatever its character, it will have political consequences. The great experiment of liberalism overturned the alliance of Throne and Altar, yet the disposition to unite them anew burns with Metternich-like ferocity in the neo-conservative breast. The throne of their desire happens to be a democratic polity and a capitalist economy; but theologically speaking, a state is a state, a throne is a throne, worldly power is worldly power. The neo-conservative Catholics seem not to understand the distinction between engagement with the world and complicity with the world. For this reason, they have lost the great advantage that faith confers upon the faithful in any society: a genuinely critical standpoint. …

[John Courtney] Murray believed, in short, in theological liberalism. Now, liberalism considered theologically requires an ontological distinction between nature and grace. The natural order can be examined by reason, and the supernatural order is the realm of faith. The role of grace is to perfect the natural attributes of mankind, to bring them to fulfillment. This dualistic distinction has been a staple of Catholic theology for centuries, and it has its obvious uses in the liberal context. It permitted Murray to affirm the goodness of the natural apart from grace, and it provided a point of contact with those who do not share Catholic beliefs about grace. Murray remarked that 'the dualism of mankind's two hierarchically ordered forms of social life has been Christianity's cardinal contribution to the Western political tradition." This dualism usefully served to undermine Catholic integralism at Vatican II, and it is the theological presupposition of the neo-conservative position today. It furnishes them with the warrant for a headlong rush into the world.

The astute observer will note the word "integralism" in the penultimate sentence and ask: I thought Spadaro and Figueroa were attacking integralism as well as dualism? Yes, they did. You see, many of the proponents of natural law do not use it in the same way that they claim it is useful. They claim it provides a denominationally neutral moral language with which a society can define the common good and pursue it. They use it to beat other people over the head. And, having used it to try and baptize democracy and capitalism, the neo-cons, and the theo-cons, are only too happy to erect a new form of integralism that unites the faith with the politics of the modern Republican Party.

I will leave the heavy theological work here to those better able to undertake it. Getting out my pointer, I will note that one of the most remarkable things about Amoris Laetitia (and the synod documents that preceded it) was the dearth of natural law thinking. #80 states that the conjugal union is ordered to procreation "by its very nature" and #251 states that gay unions "do not follow God's plan." The only really explicit reference is found at #305 and there it serves as the kind of qualification one wishes more natural law exponents would bear in mind:

Along these same lines, the International Theological Commission has noted that "natural law could not be presented as an already established set of rules that impose themselves a priori on the moral subject; rather, it is a source of objective inspiration for the deeply person­al process of making decisions".

So, evangelicals may be warming to the kind of closed-in natural law theory of the kind we associate with John Finnis, Germaine Grisez and First Things just when the rest of the Catholic intellectual universe is embracing, even returning to, a more dynamic, open-ended, and Thomistic understanding of natural law. When Gregg writes, "I also suspect Rev. Figueroa and Father Spadaro are oblivious, for instance, to many Evangelicals' embrace of natural law thinking in recent decades: something that, by definition, immunizes any serious Christian from fideist tendencies," he ignores the existence of a kind of fideism towards the work of Finnis that is as common among some conservatives as the flu in wintertime.

I will note, as well, that the retrieval of biblical and Patristic language and ideas to balance or revivify Catholic theology was at the core of the Second Vatican Council's theology, just as it is at the heart of both the Communio project and the Kasper project on mercy. We do not think of those two projects as mutually reinforcing, at least not so far, and with few overlaps of personnel to be sure. But, it seems to this non-theologian that this is precisely the point where some heavy theological lifting needs to be done: How does a retrieval of biblical and Patristic language and logic yield a Catholic theology that is less susceptible to the kind of complicity with the political order and worldly co-opting that has characterized the dualism of the Catholic neo-cons and theo-cons?

As for the assertion that Spadaro and Figueroa are tilting at windmills by suggesting there is a danger of theocratic tendencies at the heart of the "complicated political and religious web," I would point Gregg to the exchange a few years back between Cathleen Kaveny and Rusty Reno on that very topic. I recall reading these words of Reno's and thinking they were a perfect illustration of the kind of dualism that permits a headlong rush into the world:

As a Catholic, I believe that Christ's presence on the altar is a supernatural gift. To share in that gift, as Catholics do when they gather for the Mass, is to enter into a profound spiritual unity that transcends all others. I never quizzed him on the topic, but I have every reason to think [Richard John] Neuhaus believed the same thing. Before I entered the Catholic Church, he consistently expressed regret that I was wayward (even though I was very much in accord with his theological, moral and political views). We did not have "in common" what matters most. When I entered he welcomed me warmly.

But there are other dimensions to life, including religious life, and it is in these dimensions that First Things operates.

There it is, dualism in spades. Sunday Mass may or may not relate to a person's "theological, moral and political views." And, ironies of ironies, Reno subsequently was a champion of the religious liberty crusade that has taken as its mantra that freedom of religion is not simply about what we do on Sunday morning!

As I say, there is much theological work to be done. All the brouhaha about the Civilta article shows that Spadaro and Figueroa hit a nerve. The article in Civilta represented a restoration of balance and a plea for an end to the corrupting influence of this alliance between conservative Catholics and evangelicals, especially as it pertains to the public square and serves as the foundation for a hateful politics epitomized by the presidency of Donald Trump. It was a suggestive, not an exhaustive, treatment of its subject of the kind appropriate for an editorial in a magazine. It identified a real problem and shined a light on people who still had their religious hands in the political cookie jar.

The responses have had a rote, unimaginative quality to them and, what is worse, a denial of reality, like Pius IX demanding the return of the papal states. In fact, nothing previously has so convinced me that the reign of the neo-con and theo-con and llibertarian Catholics is over as this tiredness of these responses. To paraphrase the late Cardinal Francis George, theirs is an exhausted project. It is time for the church — and the polity — to move on.