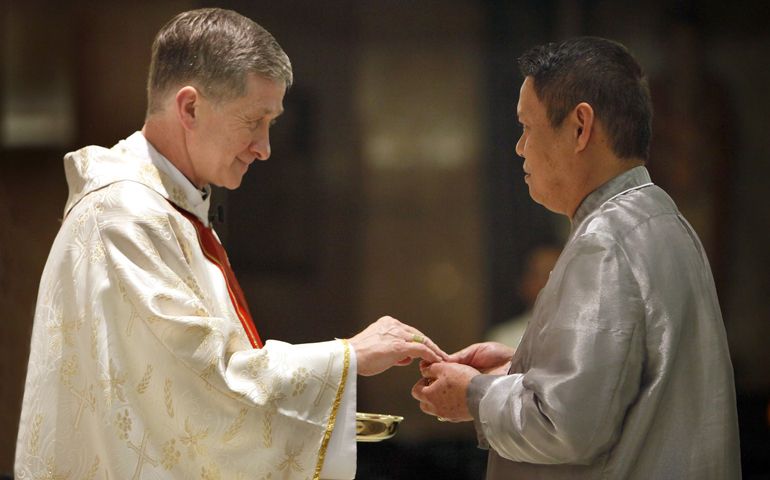 Cardinal Blase Cupich of Chicago held a press conference yesterday at which he pledged the archdiocese to renewed efforts within the city to end the scourge of violence. He reported on an inventory he had commissioned of the church's activities to combat violence, a report undertaken by academics at Chicago's Catholic universities, along with social service providers, and he looked forward to increased engagement with others in the city who are working tirelessly to end, or at least minimize, the violence.

Cupich announced a new funding effort to get resources to programs that help alleviate the scourge of poverty, the breeding ground of violence, as well as programs that directly tackle gang violence. He praised the work of Fr. Michael Pfleger of St. Sabina Church on the city's South Side, and specifically pledged additional support for his Strong Futures program that works with at-risk young men, helping them to find jobs and internships that will lead to a better future than joining a gang. Cupich also pledged additional support for the Peacemakers on the Street program, in which former gang members reach out to current ones and try to point them in a better direction.

The press conference was held at the Peace Corner Youth Center, a church-run social service center in the heart of a troubled neighborhood. In his remarks, he discussed the Peace Corner and his comments reflect the spirit of the man. "The Peace Corner is meant to be a beacon on Madison Avenue which is a dividing line between gang territories," Cupich said. "The young people who come here need to be careful they aren't crossing gang lines on their way to the building. It is also a block away from one of the most dangerous street corners in Chicago, where men openly deal drugs throughout the day.

"Yet, it is beautiful — open and bright by design. It's also LEED [Leadership in Energy and Environmental Design] certified and has a green roof, teaching children that respecting our common home is an important element in transforming our culture." Know the situation of your people. Check. Find the potential for the joy of the Gospel even in that difficult situation. Check. Link the situation to a broader vision. Check. This is how bishops who get what Pope Francis is talking about speak and act.

Indeed, the Holy Father made an appearance at the press conference too. Not only did the cardinal explain that this initiative was in part a response to the pope's World Day of Peace Message, but Cupich also shared a letter from Pope Francis that addressed the violence in Chicago and pledged his support to Cupich's efforts to combat it. "Sadly, as you have told me, people of different ethnic, economic, and social backgrounds suffer discrimination, indifference, injustice, and violence today," the pope wrote. "We must reject this exclusion and isolation, and not think of any group as 'others,' but rather as our own brothers and sisters. This openness of heart and mind must be taught and nurtured in the homes and in schools. Walking the path of peace is not always easy, but it is the only authentic response to violence."

Cupich also addressed the segregation in the city, something that has characterized Chicago since the first wave of black migrants from the south came north during World War I to work in munitions factories. "This kind of bridge building across our neighborhoods is so important to break down the barriers of segregation that leaves so many isolated and hopeless," he said at the press conference. "As the recent Metropolitan Planning Council report showed, reducing the level of segregation in Chicago — which is the direct result of racism — to the national average level would reduce the Chicago region’s homicide rate by 30 percent."

The commitment to work with other organizations in Chicago to help bring an end to the violence, repeated several times during the press conference, is remarkable for the transforming effect Pope Francis is having on the mission and direction of the Catholic Church. Think of the efforts by certain conservative groups in recent years that have focused so narrowly on preserving our own ethical purity, from the fight over the contraception mandate to the witch hunts against aid agencies that work with groups that do not share our opposition to certain forms of contraception.

Think of the so-called "watch dog" groups that monitor Catholic universities and colleges to assess their "Catholic identity" but constrict such identity to matters of sexual purity and never ask: Is the Catholic school doing anything to combat violence in its city? Does it permit its workers to organize? Does it pay a just wage?

Cupich did not say "we will only work with groups that pass ethical muster." He said that the violence would never be eradicated until bridges were built and that he wanted the archdiocese to get to working on that bridge building. This is "Catholic identity" too.

I have been re-reading Pope Benedict XVI’s beautiful reflections on Holy Week, the second part of his trilogy on Jesus of Nazareth. Therein, writing about "Jesus' High-Priestly Prayer" in the Gospel of John, Pope Benedict wrote:

The process of consecration, "sanctification," includes two apparently opposed, but in reality deeply conjoined, aspects. On the one hand, "consecrating" as "sanctifying" means setting apart from the rest of reality that pertains to man's ordinary everyday life. Something that is consecrated is raised into a new sphere that is no longer under human control. But this setting apart also includes the essential dynamic of "existing for." Precisely because it is entirely given over to God, this reality is now there for the world, for men, it speaks for them and exists for their healing. We may also say: setting apart and mission form a single whole.

Too often, that balance was neglected, and the "setting apart" seemed to exist for itself, resulting in a pervasive, if always theologically flawed, Jansenism. Yesterday, the people of God in Chicago received a challenge from their bishop to reset the balance and remember the mission of the church.

Yesterday, watching the press conference, I thought of the great legacy of progressive Catholicism in the Windy City, of Cardinal George Mundelein and Bishop Bernard Sheil and Monsignor Jack Egan and Cardinal Joseph Bernardin. I thought of the sheer exuberant energy Cupich brings to every task he has undertaken, and which was on full display at the press conference. The job of confronting violence will never be finished this side of the eschaton. But, after twenty years of seeing the Catholic Church defined so largely by its failure to protect children from sexual violence, perhaps yesterday will be seen, in future times, as the day the church began to acquire a new public image, as the Church of Jesus Christ, engaged with other civic groups, working to protect children from gun violence, gangs and drugs on the streets of our nation’s cities.