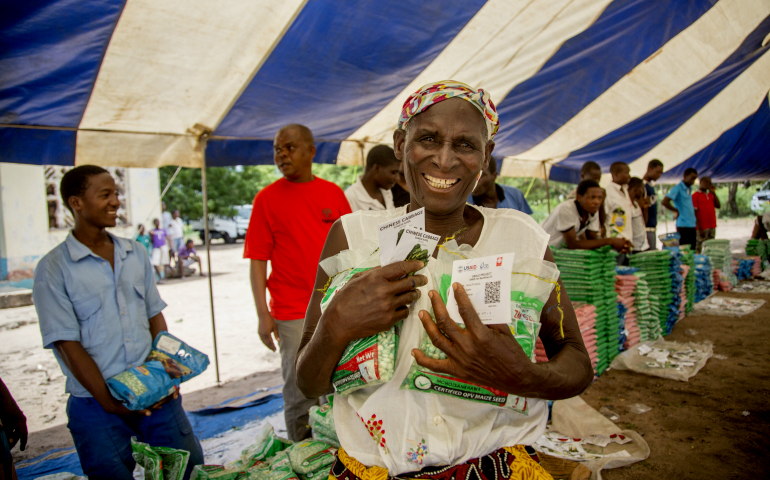 Politifact and others have shown that the American people are "clueless" about foreign aid, thinking the U.S. government spends as much a quarter or a third of all federal spending on foreign aid. They think it should be about 5 percent or maybe 10. The U.S. government actually spends less than 1 percent on non-military foreign aid. Development aid has traditionally enjoyed widespread bipartisan support, but the American electorate indicated what they thought of tradition last November.

The proposed cuts would be popular with President Donald Trump's base. I am sure Steve Bannon would approve the cuts. But such cuts are both unjust and stupid. And they would hit Catholic Relief Services and the people it serves especially hard.

"Following the headlines and seeing the need around the world, it is understandable that there are some who are skeptical of international assistance," said Joan Rosenhauer, executive vice president at CRS, which receives about 60 percent of its budget from USAID. "What they don't see is the huge difference it makes for individuals, communities, countries and the world. Nearly 1 billion people have been taken out of extreme poverty in the past 20 years, in part because of foreign assistance programs. Working in more than 100 countries, we see that impact firsthand every day — from women who lift their families out of extreme poverty through savings and lending programs, to farmers whose lives aren't completely upended by yet another drought because they are now planting drought-resistant crops."

Recently, Rosenhauer traveled to Malawi, where she visited a USAID-funded project that helps farmers. "Farmers are trained in simple farming techniques that dramatically increase their production. By establishing marketing clusters, we help them combine their resources to gain greater access to markets and garner higher prices," she explained. "At the same time, we helped them form savings and lending clubs through which they can set and achieve goals for their families, such as paying school fees or repairing their homes."

Other aspects of the program, she said, include:

"The people I met were filled with hope and excitement about the improvements in the lives of their families that they were experiencing as a result of this program," Rosenhauer said.

But, hey, if the Trump base needs some red meat, to hell with helping poor farmers in Malawi.

Cutting foreign aid is also stupid, although Rosenhauer is too polite to use harsh language. "Foreign development aid is the most cost-effective way to help stabilize fragile and struggling societies and keep all of us, including America, safe and strong," she said. "These programs foster goodwill and push back against the poverty and chaos that can be the breeding grounds for terrorism."

Trump would rather throw the mother of all bombs into a cave in Afghanistan and hope that does the trick.

Indeed, the preference to bombast and bombs over development assistance points to another issue. "In addition to concerns about budget cuts, we are worried about a massive strategic shift as well," explained Molly McCoy, policy director at the AFL-CIO's Solidarity Center. "The administration could focus all foreign aid only on those countries in which the U.S. has a strategic security interest. Most of Asia, large parts of Africa, and most of Latin America could lose funding for critical programs. Those countries aren't facing an ISIS threat, but they face other challenges like child labor and human trafficking."

"In Central America, organizations as disparate as CRS and the Solidarity Center have programs that support families and workers," McCoy told NCR. "Programs like that can cost maybe a few hundred thousand dollars a year, but they provide critical stability to families that might otherwise be forced to migrate, put their children to work, or see their teenagers get recruited by criminal gangs because of a lack of good jobs. Sadly, some of the same people who complain about migration support closing down this kind of development work."

Lindsay Coates, president of InterAction, the largest alliance of international nongovernmental organizations working on humanitarian and development aid, echoes this concern. "You can think of foreign assistance as bolstering U.S. strategic interests," she told NCR. "The problem is when you define U.S. strategic interests narrowly, in an exclusively military sense."

She added, "Support of democracy, support of entrepreneurship, and support of public institutions — these further U.S. interests in their broadest sense."

Coates thinks that development aid is essential to the conduct of foreign policy. "U.S. leadership requires a kind of dance between long-term and short-term demands. Part of the magic of foreign aid is that it can dance along that line," she explained.

"There are three kinds of categories of problems that foreign aid addresses, that highlight this balance between long- and short-term challenges: political instability, economic underdevelopment and health epidemics or crises. These are often interrelated, with economic underdevelopment leading to a political crisis, or vice versa, or a health crisis, like the Ebola epidemic, affecting both political and economic stability. The U.S. government has to work across multiple dimensions."

Americans are generous when there is some natural disaster that befalls another country, but only long-term assistance can lay the groundwork for stable societies and, indeed, be put to immediate use when there is a tragedy. When Typhoon Haiyan struck the Philippines in November 2013, CRS already had hundreds of staffers on the ground. And, in many countries, religious aid agencies rely not only on funding from USAID but from the infrastructure and networks that USAID has on the ground, and vice versa.

Coates points to the various ways religious groups work with labor groups and with government agencies to help people throughout the world as an inspiration to her work, but also as a key political asset as the fight over funding heats up.

"I am going to fight as hard as I can to sustain and enhance U.S. engagement with the world through development and anti-poverty programs," she said. "There is a strong, vibrant constituency for this work. There are 'servant leaders' in this country who are committed to this work, the good people at CRS and the Solidarity Centers among them. It makes me believe we won't give up. We can't give up."