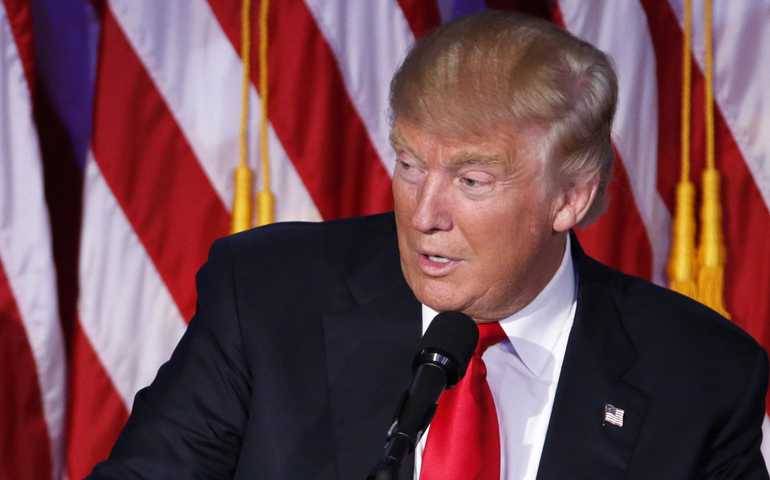 Shock. It is the emotional reaction that has accompanied Donald Trump's campaign from its start and it reached its climax last night. The country has administered a severe disaster to itself. The trappings of democracy cannot obscure the moral enormity, nor ameliorate the sense of disgust: This is a dreadful thing that has happened to America, but it did not happen the way an earthquake happens or a tornado happens. This self-inflicted wound was chosen.

It is futile to try and predict what a Trump presidency will look like. The thought of Attorney General Rudy Giuliani sends a shudder down one's spine. I am not a psychologist but I don't need to be: Mr. Trump has advertised his preference for unpredictability. The man who claimed he knew "more than the generals" about ISIS now looks at the landscape of American politics and media and has received the self-assurance that he knew more than all of them, he knew he would win. This will not diminish his sense of self-importance nor induce a sense of restraint. He will not now suddenly learn the human necessity of declining to cross the bounds of decency.

If the country had elected Jeb Bush tonight, or Paul Ryan, I would be worried about certain public policies I think are important. In both cases I would also rejoice about the improved prospects of other policies. This is different. Part of the difference comes from the knowledge that a foreign power, no, a foreign adversary, played a conspicuous role in this election. This fact did not receive the attention it deserved, a worrying sign that we have already begun to become accustomed to the shock.

The president-elect delivered a conciliatory and even gracious speech last night. Do not be fooled. He rode to victory by stoking many of the worst sentiments in human nature and he awakened a beast. The beast will continue to want to be fed and when his advisors tell him not to continue agitating those base sentiments, he will scorn them. It is no secret that he already despises the Republican establishment as much or more than he despised Hillary Clinton.

There will be plenty of time in the days ahead to look deeper into how this terrible event came to pass, and there is surely more than enough blame to go around. Let us leave that for the days ahead. I am collecting thoughts from wise Catholic leaders and will post them later today.

At this moment, as a proud representative voice of the Catholic and political left, it is clear as day that the political left has lost the ability to explain itself to a majority of the American people. I often say that there is no problem that would not be made better if given the leaven of Catholic social doctrine. Now, the secular left needs the Catholic left more than ever. Demographics were never destiny and it was always an insult to democracy to suggest that they were. That Catholic social doctrine places moral claims, claims which may well demand resistance from us in the next four years, peaceful resistance to be sure, small "d" democratic resistance certainly, but resistance nonetheless. The damage must be contained as much as possible.

This election was not won or lost on any particular social issue or economic policy. This election was about our national identity. America is not the country many on the left thought it was. Consumer capitalism was never likely to be the friend of civilized democracy: It has raised millions of people whose untamed appetites govern their decisions and obliterate their moral sensibilities. Our democracy now has paid a terrible price for leaving socialization to the markets.

It is a grim, grim day. There is more work to be done than we realized, but let no one give in to despair. Let the sense of shock we feel be a moral prod. Immigrants, the vulnerable, the planet, all claim our vigilance and protection in the dark days ahead. Let us set ourselves to the task of fashioning a different national identity from the one ratified last night, an identity rooted in a true moral vision for our country, and reaching out to those for whom these election results are personally threatening and to those whose sense of cultural disenfranchisement led them to vote for Mr. Trump. The country has a massive self-inflicted wound this morning, we are all in the field hospital now. Let us not flinch from the work ahead.