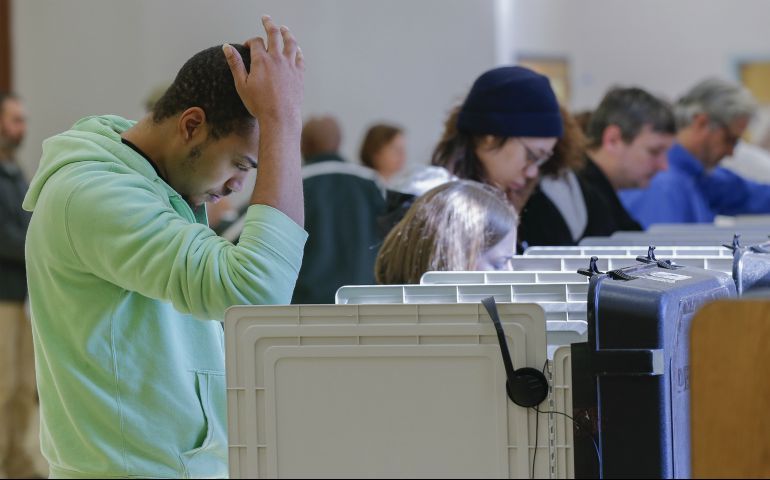 All political eyes are on suburban Atlanta today as Democrat Jon Ossoff faces off against Republican Karen Handel in a special election to fill the congressional seat vacated by Secretary of Health and Human Services Tom Price. This is the runoff: In April, Ossoff came within a whisker of winning the 50 percent of the vote needed to avoid a runoff, while Handel beat a slew of other Republicans vying for the seat.

Nate Silver, at Fivethirtyeight.com, gives some of the history of the district. It broke heavily for Mitt Romney in 2012, with the former governor winning by 23 points over President Barack Obama, but in 2016, Donald Trump narrowly beat Hillary Clinton by 1.5 percentage points. Those numbers make Democrats think Georgia's 6th Congressional District is the kind of suburban, highly educated district that they can flip from the Republicans. In last year's Republican primary, while Trump won the state of Georgia handily, with 39 percent of the vote to Sen. Marco Rubio's 24 percent and Sen. Ted Cruz's 23 percent, in the 6th District, it was Rubio who won handily with 47,465 votes to Trump's 33,812.

The Atlanta Journal Constitution has a good look at the district. The Peach State's paper of record correctly notes that, according to research from the Pew Center, education levels were one of the strongest indicators of presidential preferences in the 2016 general election, with Clinton winning big margins among those with college degrees and Trump doing best among voters with less than a bachelor's degree. In Georgia's 6th, a stunning 60 percent of voters have a college degree, while in the state at large, that percentage is only 29 percent. Ergo, President Trump's tweet urging voters to support Handel may not carry as much weight as similar tweets did in special elections in Montana and Kansas, states where Trump is more popular.

Rep. Price won re-election in the district by 23 points, or 326,005 votes, last November. Since Newt Gingrich won the seat in the 1978 midterm elections, the district has been reliably Republican, with Johnny Isakson representing it until his election to the Senate in 2004, when Price took the seat. Consequently, voters familiarity with Price made them more immune to changes in voting behavior based on demographic changes, so long as his name was on the ballot. Today, it isn't.

Both parties have poured money into the race. Over a month ago, CNN reported that this was the most expensive House race in history. And it has only gotten worse, as millions have poured in to both candidates. Ossoff has raised a total of $23 million! It is hard to know what effect that kind of money has on a race like this. Saturation television advertising can certainly drive up voter turnout, both by increasing name recognition and by driving negative stories about one's opponent. Both campaigns could afford to drive their voters to the polls in a limo if they wanted. The early voting totals have broken records.

Democrats need to win this. They have come close in other special elections, closing the partisan gap by significant margins in both Kansas and Montana. But "moral victories" don't win control of the chamber. "In public, the [Democratic] party insists that the mere act of keeping the contest close in a district the GOP routinely wins by over 20 points is a victory in itself," writes Gabriel DeBenedetti at Politico. "But behind closed doors, operatives and lawmakers expect a withering round of internal second-guessing if they come up short after pumping enough money into the pro-Ossoff effort to make it the most expensive congressional race ever."

But even if the Democrats win, they need to conduct some second-guessing of their strategy going forward. There simply are not enough districts like Georgia's 6th nationwide for the Democrats to flip, at least not before redistricting is accomplished after the 2020 census. Even if the next round of redistricting does not favor the GOP as heavily as the current district maps in most states, there are simply not enough suburban districts to offset the GOP edge in rural areas. Additionally, from the Catholic angle, the voters in the suburbs tend to be attracted to Democrats and Republicans for the wrong reasons: Affluent, well educated, white voters like the Dems because they are pro-choice and they like the Republicans because they want lower taxes, while rural and less affluent voters want a more robust economic populism and a less aggressive stance on cultural issues.

Whatever happens today in Georgia, we can count on one thing for sure: The results will be overinterpreted. This is one out of 435 congressional districts. Like the other 434, it has unique qualities and a distinct history. No two candidates are alike and all have weaknesses and strengths that other candidates might not have. Democrats will need a string of special election victories, not just strong numbers on the generic partisan polling question. Republicans may go three-for-three in special elections to date, and still have trouble in next year's midterms depending on how the health care debate unfolds and whether congressional Republicans decide to support a White House crippled by investigations, or to cut bait and fend for themselves.

Catholic lobbying crosses divides in pursuit of the common good